The sun was shining and the temperature flirting with the 60-degree mark Monday afternoon as spring officially flung for high school spring sports after the 2020 season was wiped out by COVID-19.

And nobody was any more excited to be back at work than city tennis legend Kevin Hedberg of Washburn Rural, now in his 42nd season as a high school coach.

"I think all of us are just really thrilled to be out here and doing something,'' said Hedberg, who turned 69 last week. "And it's a beautiful day. We don't have days like this to start with very much and the week looks really good.'' 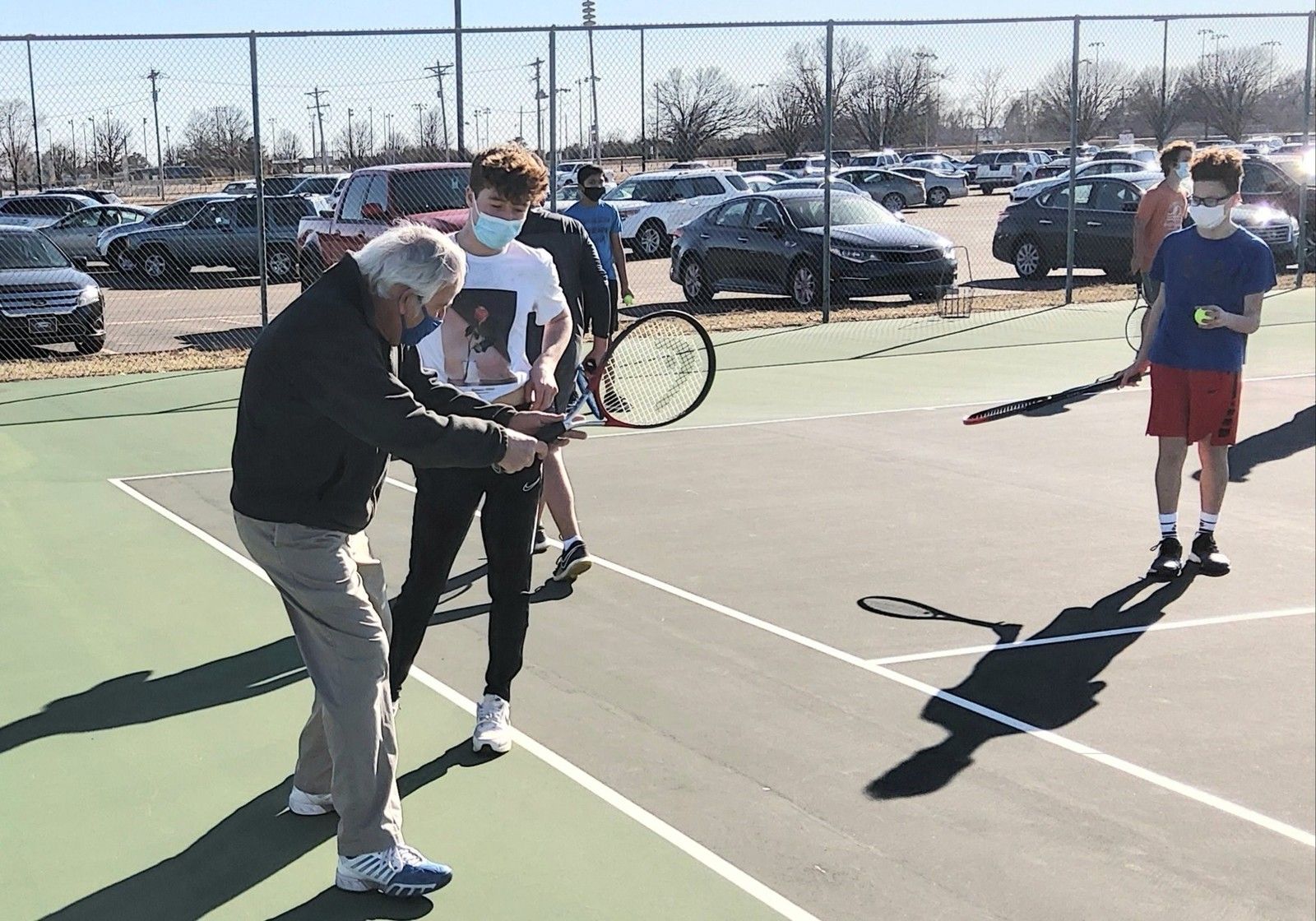 Local tennis legend Kevin Hedberg, now in his 42nd year of coaching, is hyped to be back on the court with his Washburn Rural boys team after the 2020 spring season was wiped out by COVID-19. [Photo by Rick Peterson/TSN]

Hedberg's legacy in high school tennis is already etched in stone, with Hedberg coaching the Junior Blues to four Class 6A boys state team championships and one girls title while also producing a string of Centennial League and city team champions as well as individual state champs.

But while Hedberg could have retired from teaching and coaching years ago, he's never considered that as a serious option, not even in the age of the coronavirus.

"I'm with a good group of teachers and what we were going through was kind of a shared experience,'' Hedberg said. "We were in it together and I really would have felt like I was kind of walking away from a challenge to quit last year.

"I did really miss the boys season because I had a couple of senior boys that I was really fond of and they had waited to get the opportunity to play and they lost it, and that was hard.''

With the start of a new season Monday, however, Hedberg was back in his happy place.

"It's still a lot of fun and it's a sport I love and I see it as a lifetime sport that everybody should at least get some exposure to,'' Hedberg said. "It still gets me going and I still really enjoy it.

"I'm not going to say that there aren't going to be some really long days because there are, and my energy's maybe not what it was 10 years ago, but I still think I have more than enough to be effective and that's what I'm looking for.''

After teams across the state were sidelined just about a week into preseason practice last spring, Hedberg said it's almost like starting over this season, but it's a challenge he embraces.

"It's everybody and everybody's going through the same thing,'' he said. "I feel like I have two freshman classes, but one is sophomores. I'm still learning names at this point and trying to see what we've got.

"It's going to be a different kind of year, but we'll get through it.''

A 6-foot-3 junior, Brooks shared game-high scoring honors with 22 points and also grabbed a game-high 12 rebounds as Topeka West earned its first Class 5A boys state tournament berth since 2010 with a 55-52 win over Seaman in Saturday's sub-state championship game. With the win the Chargers improved to 19-2 and advanced to a Tuesday night state quarterfinal game at Hays.

Canady, a 6-foot junior, recorded game-high totals of 21 points and 12 rebounds as Topeka High's girls earned their third straight Class 6A state basketball tournament berth with a 72-52 win over Washburn Rural. With the win the 21-2 Trojans set up a Tuesday night state quarterfinal matchup with Wichita Heights at Topeka High.

Doyal, a junior, finished seventh individually in Friday's Class 6A state girls bowling tournament at Northrock Lanes at Wichita with a 631 three-game series to help Washburn Rural earn a team trophy with a third-place finish. Doyal had a high game of 242 for the Junior Blues.

A senior guard, Geiman hit a three-quarters-court buzzer-beating 3-pointer to give Washburn a dramatic 69-68 win over Northwest Missouri in Saturday night's MIAA Tournament championship game, Geiman finished with 23 points on the night after being named a first-team All-MIAA pick and all-defensive team selection earlier in the week. Geiman is a two-time All-MIAA first-teamer.

Lewis, a junior guard, was named the MIAA Tournament Outstanding Player after helping lead Washburn to the tournament championship for the first time since 2012. Lewis scored 29 points in a 101-72 win over Missouri Western in the semifinals and had 26 points in the Ichabods' 69-68 win over No. 1-ranked Northwest Missouri in the championship game. Lewis received All-MIAA honorable mention earlier in the week.

Millard, a junior, placed a city-high fourth-place finish in last Thursday's Class 5A-1A state bowling tournament at Northrock Lanes in Wichita, bowling a 612 series with a high game of 232. Millard, who finished fifth individually at state as a sophomore, led the Vikings to a fourth-place team finish.