Washburn's chances for a third straight MIAA win looked somewhat bleak at halftime Saturday, with the Ichabods trailing by 11 points at Central Missouri.

But the No. 16-ranked Ichabods came storming back in the second half behind senior point guard Tyler Geiman to take a 70-68 win over the Mules.

There were three lead chances and three ties the rest of the way until Washburn tied the game at 68 with 41 seconds remaining on a hoop from Geiman and scored the game-winning points on a layup from senior Jace Williams off a Geiman assist in the closing seconds.

Anderson and Washburn Rural began defense of those titles in Saturday's Division I Regional girls tournament, with both coming through with victories.

Anderson, a senior who moved to the 191-pound division this season after winning at 235 a year ago, won the regional title in dramatic fashion over Shawnee Heights  junior standout Maranda Bell and was joined on the top of the victory stand by sophomore 120-pounder Addison Broxterman and senior 155-pounder Rebekah Smith as Washburn Rural qualified all 12 wrestlers for Friday's sub-state at Wichita Heights while capturing the team championship by a 211-168 margin over host Emporia.

"Man, we got 12 in, I'm happy as a clam,'' said Washburn Rural coach Damon Parker, who was named the regional coach of the year. "It's awesome. We get to bring everybody back and do it again next week and we'll have the exact same goal next week and that's get 12 through and set ourselves up for state and win subs.''

Washburn Rural's Rebekah Smith competes in the 155 pound class at the Girl's Regional Wrestling in Emporia. Photo by Rex Wolf/TSNAnderson went into the regional ranked No. 3 at 191 pounds by the Kansas Wrestling Coaches Association, but was able to knock off No. 2 Trinity Ervin of Emporia (24-4) by 4-0 decision in the semifinals before rallying to take a 4-2 win over top-ranked Bell (26-3) in the championship match with a takedown as time ran out.

"It was fun," said Anderson, who improved to 24-4. "You're sitting on the bleachers worrying and over-thinking it and then when you actually get on the mat and actually wrestle, even though you win or lose, it's still ends up being fun, so I had fun.''

Broxterman, who is ranked No. 2 at 120, improved to 18-5 on the season with a pin in 1:39 over Shawnee Heights sophomore Riley Thompson (19-9) in the finals while Smith, top-ranked at 155, needed just 1:21 to pin Bonner Springs freshman Chloie Knapp in the championship match.

Broxterman and Smith both won all of their matches by pin, combining for five on the day. 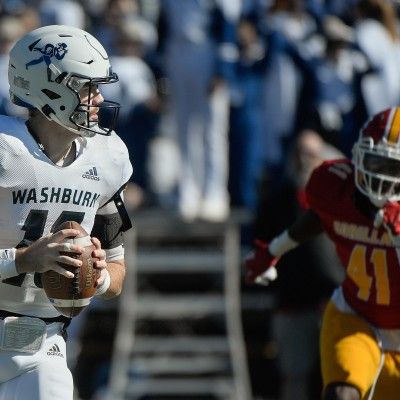