Seaman's baseball team had to work out of numerous jams against Shawnee Heights Tuesday night, starting with an eventful first inning and going down to the final pitch of the night.

But the Vikings had an answer for each and every situation, riding strong pitching and key defensive plays to a 2-0 rivalry win over the T-Birds on Heights' Senior Night at the Bettis Family Sports Complex.

"When you play guys that you know, that you've grown up with, you can throw the records out because they want to beat you,'' Seaman coach Trent Oliva said. "That's a good ballclub over there and we're going to get their best shot just like we're going to try to give them our best shot.''

Seaman, which improved to 14-3, scored what proved to be the game-winning run when junior Maclane Finley singled and scored in the top of the first inning, but Shawnee Heights loaded the bases in the bottom of the first, setting the tone for the night. 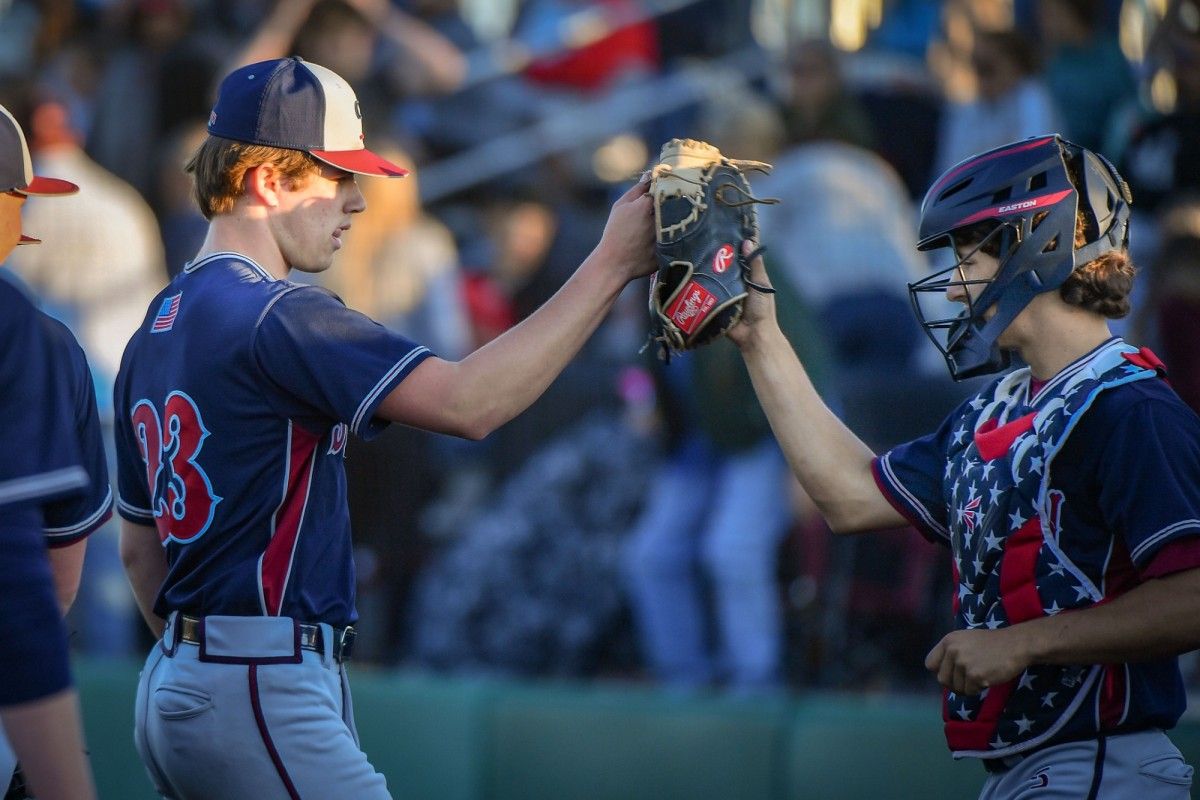 Seaman pitcher Brady Stuewe is congratulated by catcher Andrew Kirmer after the final out in Tuesday's 2-0 Viking win over Shawnee Heights. [Photo by Rex Wolf/TSN]

Topekan Schmiedeler hoping to give specialists leg up on their future Perry Schmiedeler will put on a specialists camp at WU on June 10, along with Ichabods special teams coordinator Zach Watkins. [Photo courtesy of Washburn Athletics}.

Perry Schmiedeler has long had a passion for special teams, parlaying that dedication into outstanding punting and place-kicking careers at both Washburn Rural and Washburn University.

On June 10 the WU record-setter, along with Washburn special teams coordinator Zach Wakins, will try to lay the groundwork for the success of future specialists in a one-day camp at Yager Stadium and the Washburn Indoor Athletic Facility.

"I've kind of been doing private lessons the last several years, since I graduated, and I thought it would just be really cool to get a bunch of kids and work with all of them together at the same time,'' said Schmiedeler, who completed his college career in 2018 as the Ichabods' all-time leading kick scorer and No. 2 all-time for punting average.

Schmiedeler said he wants to emphasize the importance of the kicking game to athletes at the middle school and high school level as well as those who aspire to compete at the college level.

"To my knowledge Topeka hasn't really had a kicking camp like this,'' Schmiedeler said. "I do know other universities and colleges around Kansas have them, but never something this local, so I think this will be really cool to get a bunch of local kids together to kick together, but also kids from around the region. We've already had kids from Nebraska and Missouri sign up, so we're looking forward to having a bunch of different kids from around the Midwest really.

"The camp is over for seventh through 12th graders and we've had some middle-schoolers sign up already but we've also have kids in high school going to their junior and senior year who are looking at Division II and Division I colleges.''

Schmiedeler said he thinks it will be an advantage to have athletes at different stages in their careers involved.