It was something Brittany Force had long thought about, but she thought the possbility of sharing the winner's circle with her father, John, might have been an impossible dream.

Sunday at Heartland Motorsports Park the impossible came true, with John winning the Funny Car championship and Brittany the Top Fuel crown in the Menards NHRA Nationals presented by PetArmor. John Force out-ran No. 1 qualifier J.R. Todd to notch the 154th national event win of his legendary career with his 10th Topeka victory while No. 1 qualifier Brittany knocked off Clay Millican to post her first win of the season and her first at HMP.

It was the first time in Camping World Drag Racing Series history that a father and child duo shared the winner's circle.

“This will be one I'll never forget.'' said Brittany Force, who moved to second in Top Fuel points. "This has been on my bucket list for as long as I can remember. I remember there have been so many close calls where we thought, 'Hey, this could be our day that we're gonna double up.' To win a race is hard enough and then to do it with your teammates, it’s almost impossible. So it's like you almost put it on the backburner.

John Force, who took over the Funny Car points lead for the first time since 2014, agreed.

“I had a good day,” Force said. “Robert (Hight) was probably my toughest race because it’s hard to beat Robert. I just had a car that was pretty fast, wasn’t the quickest, but I got the win. What was special was to do it with Brittany. With Courtney and Ashley (his daughters), I never got the chance because they were always Funny Car, and usually beat me, but with Brittany I finally got that double up. It means a lot. We’re a family of racers.''

Rookie Dallas Glenn won in Pro Stock, using a perfect .000 reaction time in the final round to top Kyle Koretsky.

It was only the sixth perfect reaction time in a final round in Pro Stock as Glenn earned his second victory.

“It's hard to put this win into words,” Glenn said. "But it's just like this is like a dream come true. This season, it's taught me a lot. I've had a lot of highs and I've had some lows where I've been struggling and we've gotten a little taste of everything this year.

“I felt like I did my job really well and the car is just working really good right now. I'm really excited for the Countdown (to the Championship) coming up here and Indy next because we’ve got a really fast car for it.” 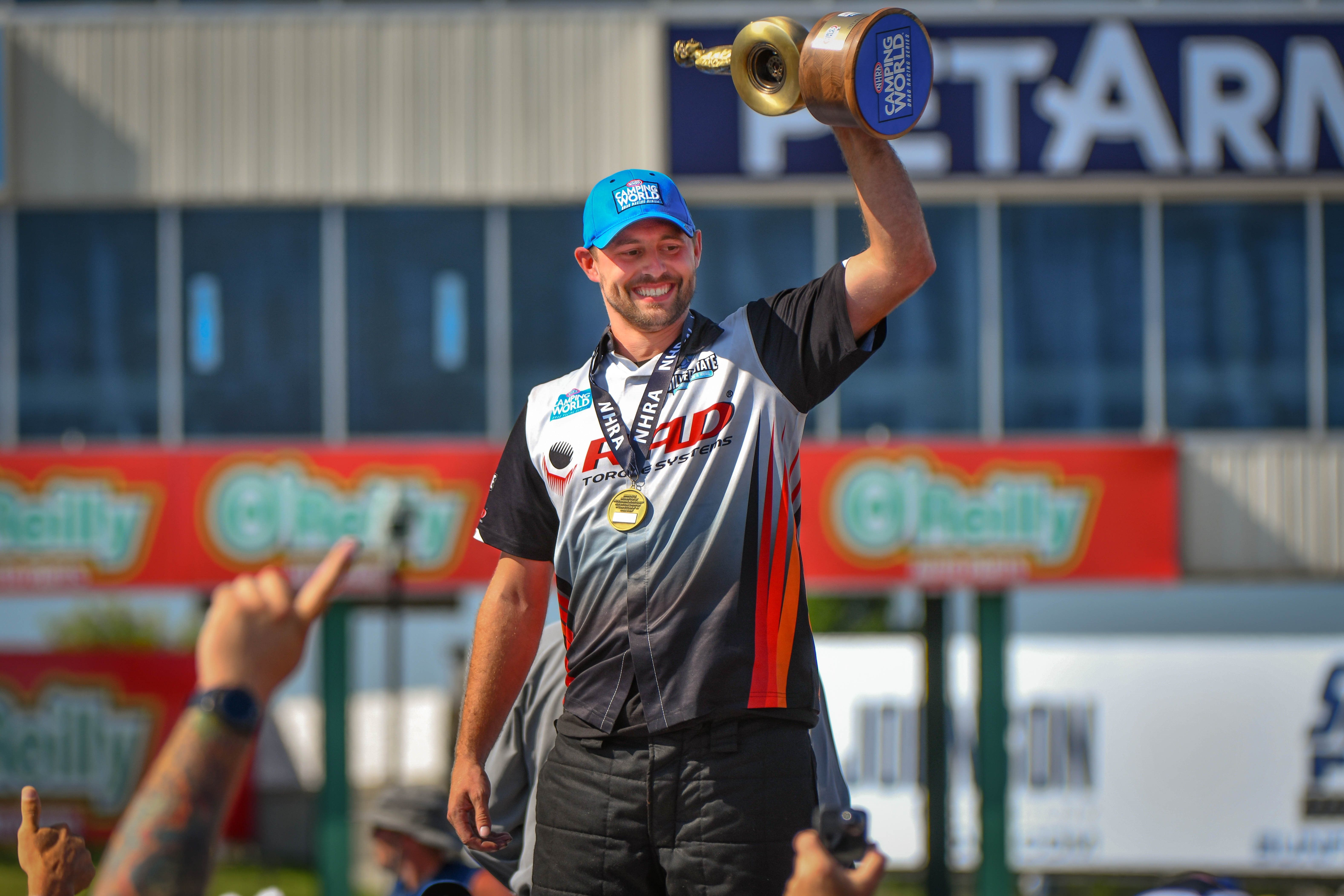 EDITOR'S NOTE: Drag racing legend John Force sat down with TopSports.news for an extended interview Saturday before going on to win the Funny Car title Sunday in the Menards NHRA Summer Nationals at Heartland Motorsports Park. Force notched the 154th national event win of his career en route to taking over the Funny Car points lead.

Even though he knows it was the right decision, drag racing's GOAT, John Force, said that sitting out all but two races of the 2020 NHRA season due to COVID-19 was one of the toughest things he's ever done.

But the 16-time Funny Car world champion and 21-time championship owner, is back in his happy place, racing and winning in the Camping World Drag Racing Series.

"I had to park it for a number of reasons and it hurt me more or as much as anybody not being able to race, because that's what makes me go,'' Force told TopSports.news. "I'm so happy just to come in to Topeka and people go, "Wow, your personality changes.' ''

Force's return to Topeka for the first time since 2019 was delayed by inclement weather that forced him to spend a nearly-sleepless Thursday night in Tulsa, Okla., but compared to what the world has gone through while fighting through the COVID-19 pandemic, Force said that was just a minor inconvenience.

"I spent the night in Tulsa, we all got stuck there, but that's where my mom was born so I got to see a little bit of the town,'' said Force, who arrived at HMP  Friday in plenty of time for the first round of qualifying. "As tired as I was Friday night, two hours sleep, when I got in that car I was young again. I came alive.''

The 72-year-old Force admits that part of his life was missing when he was out of racing a year ago.

"I do it because I love it and it was gut-wrenching,'' Force said. "There were nights I stayed up and I sat in front of the TV and I cried. I just sat there and said, "They're out there and doing it. How can they do it and I can't?' Now they only ran 10 races, but if I would have kept all my people on I would have went under.

"At the end of the day it was hard on me and I don't want to get in to being corny, but I had to sit down and have mental talks. I had to go to the church. I had to go sit down and say, 'This ain't working here, somebody talk to me.' It's just a matter of you've got to find yourself in any kind of a crisis and that's what I had to do.''

Normally Force is wrapped up in racing 24/7, but took advantage of the time off to spend more time with his family, including his four grandchildren.