On Tuesday night, the Seaman and Shawnee Heights boys and girls wrestling teams split a dual meet at Seaman.

The Shawnee Heights girls' pulled away with a convincing 60-24 win, while the Seaman boys' won on a victory in the last match, 40-39. 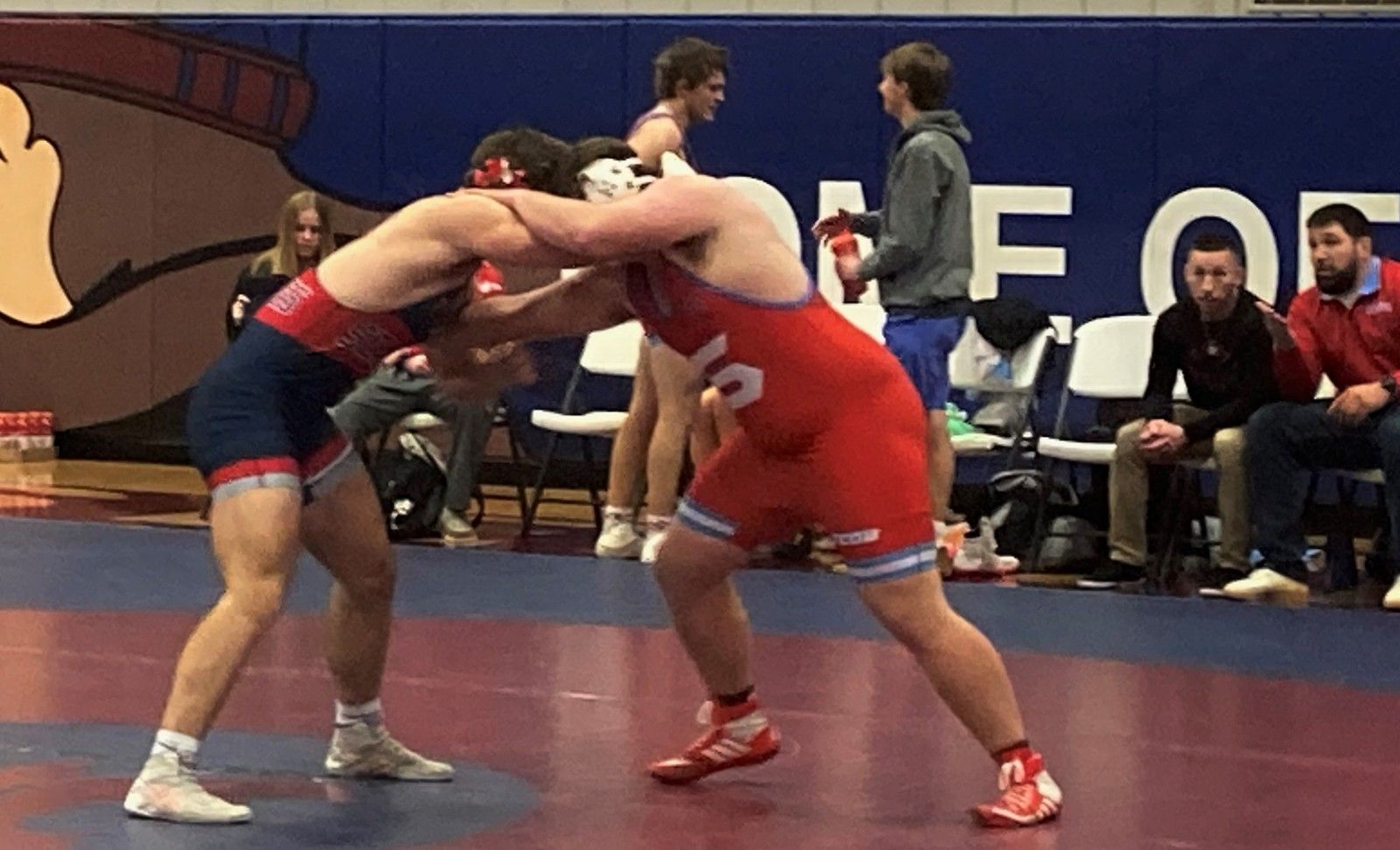 Seaman senior 285-pounder Jaxson Thomas (left) battles with Shawnee Heights junior Rykan Carver in the 285-pound match Tuesday at Seaman. Thomas won with a pin to give the Vikings a 40-39 win over the T-Birds. [Photo by Isaac Deer/TSN] 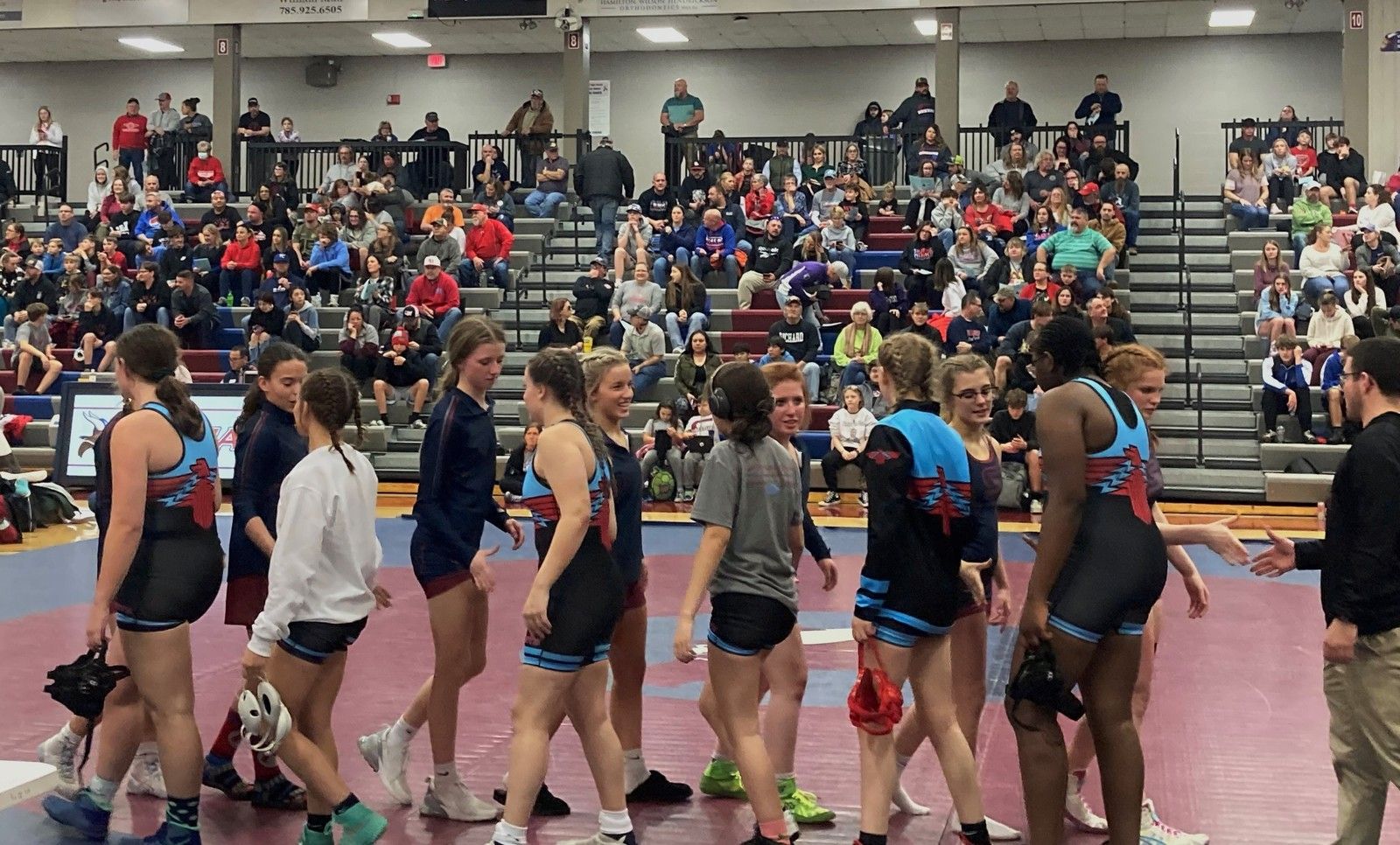 The Seaman and Shawnee Heights girls wrestling teams congratulate each other after Heights' 60-24 victory at Seaman. [Photo by Isaac Deer/TSN]

Even though Shawnee Heights scored 36 points off of Seaman forfeits, the Thunderbirds wrestled terrifically.

The most eye-opening victory of the night for the Thunderbirds was 130-pound Isabel Reyes pinning 130-pound No. 2-ranked Koti Best in 33 seconds. That was a memorable defeat that Shawnee Heights won't forget anytime soon.

"We knew there were going to be some big-time matchups for the girls, and there were," Shawnee Heights coach Chad Parks said. "Some matches went our way, and some didn't. Overall, having our full team helped us out tonight. Izzy Reyes got a big upset on paper. Izzy is always going to wrestle hard. Koti Best is really good. They will see each other again, but it was fun to see. Izzy really stood out today.''

"Obviously, when you have so many open (matches), you're going to give up some points," Seaman coach Jordan Best said. "When I went back after the matches were over and looked at each match-to-match, we take four out of eight matches; I can't be upset. We had a couple of losses I wasn't expecting, but that's part of the sport.''

Seaman boys get a "buzzer beater"

A highly anticipated matchup between Seaman 285-pound No. 4-ranked Jaxson Thomas and No. 6-ranked Shawnee Heights standout Rykan Carver would determine who came away with the boys team victory Tuesday night.

With Shawnee Heights holding a 39-34 advantage before the match, Thomas would need to shine and the senior did just that in front of the Seaman crowd on Senior Night.

Thomas pinned Carver in 30 seconds to secure the win for Seaman.

"Jaxson is an integral part of this team," Seaman coach Tony Pena said. "We are lucky to have him in his senior year. We expect big things for him at the state tournament this year."

Pena wasn't pleased with the team's overall performance but was glad the boys could come away with the win.

"Honestly, it was some of the sloppiest wrestling that we've done all year," Pena said. "That should have never been that close. I'm just glad we were able to pull out the win in the end. It's been a while since we beat (Shawnee Heights).

"Honestly, on paper (Seaman) was supposed to beat us by a lot," Parks said. "We have a super young team, and our kids really battled tonight. It came down to the end, which I love, it's good for wrestling, and it's good for the crosstown rivalry. We constantly talk to the kids about it's not about outcomes; it's about how we perform. If your definition of success is going out there and battling hard, win or lose, at least you hit your definition."