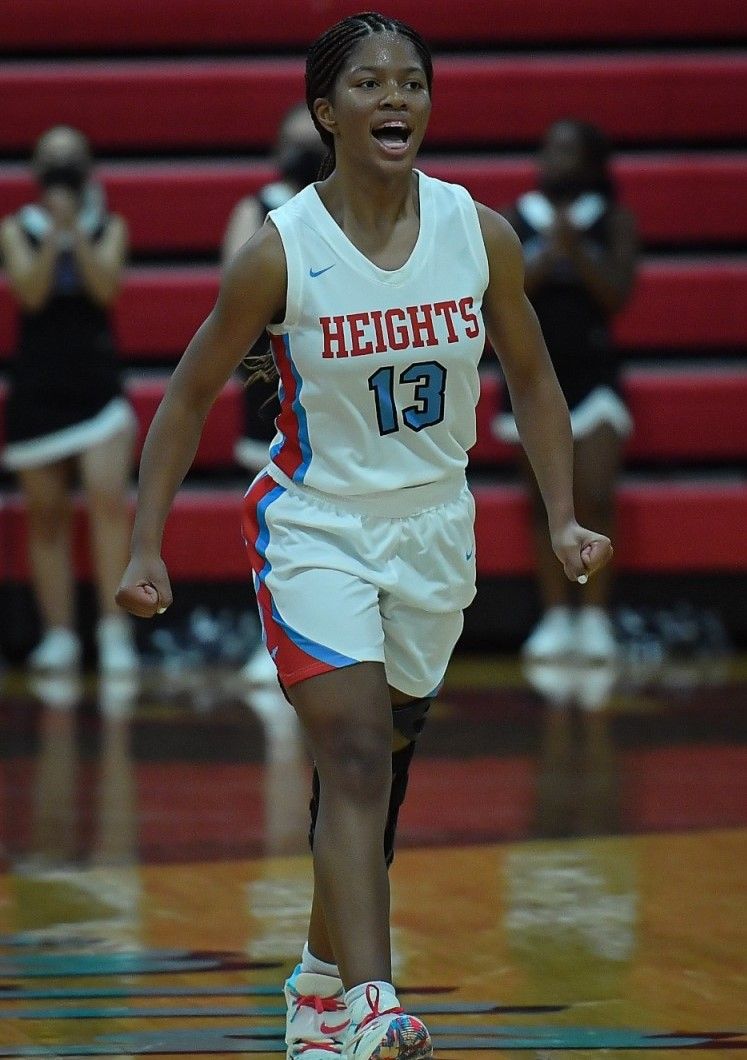 Seaman, which is top-ranked in Class 5A by the Kansas Basketball Coaches Association, is coming off its first loss of the season, a 74-71 double-overtime United Kansas Conference decision at Basehor-Linwood Tuesday night, while No. 9-ranked Shawnee Heights will be playing its third game of the week after taking a 43-7 UKC home win over Kansas City-Turner on Tuesday and a 41-32 win at No. 8-ranked De Soto Thursday night. Shawnee Heights has now won seven straight games dating back to a four-point loss to De Soto in the T-Birds' season-opener. Seniors Emari Doby and Taylor Rottinghaus led the T-Birds with 13 and 12 points, repectively.

No. 8-ranked (Class 6A) Topeka High is coming off its second straight Centennial League loss, a 47-46 home loss to No. 5-ranked Washburn Rural Tuesday night, while Hayden snapped a two-game losing streak with a 37-27 league win at Junction City. Senior Kiki Smith led Topeka High with 16 points against Washburn Rural while junior Lauren Sandstrom and sophomore Brylee Meier scored 13 points apiece for Hayden in the win over Junction City.

Senior Brooklyn DeLeye had game-high totals of 17 points and 11 rebounds as Washburn Rural ended its seven-game losing streak against the Trojans with a 47-46 win Tuesday night at Topeka High. [Photo by Rex Wolf/TSN]

No. 5-ranked (Class 6A) Washburn Rural held on for a 47-46 Centennial League victory over No. 8-ranked Topeka High Tuesday night, with the Junior Blues snapping a seven-game losing streak against the Trojans with their fourth straight win. Senior Brooklyn DeLeye led the Junior Blues with 17 points and 11 rebounds while senior MaRyah Lutz added 11 points and seven rebounds. Manhattan was off Tuesday after a 47-25 Centennial League win over Junction City last Friday.

Piper is coming off a 60-38 United Kansas Conference loss to No. 8-ranked De Soto on Tuesday while Topeka West was off Tuesday after a 58-38 loss at De Soto last Friday. Topeka West's lone win was a home 49-11 UKC victory over KC-Turner.

Highland Park posted its fourth straight victory on Tuesday while remaining unbeaten in the Meadowlark Conference, rolling to a 64-20 road league win at Kansas City-Sumner, ranked No. 7 in Class 5A by the KBCA. Sophomore De'asia Sanders led Highland Park with 20 points while hitting eight of 12 shots from the floor. Sophomore Amelia Ramsey added 14 points for the Scots. Kansas City-Harmon lost its first four games of the season and was scheduled to play KC-Schlagle on Tuesday. 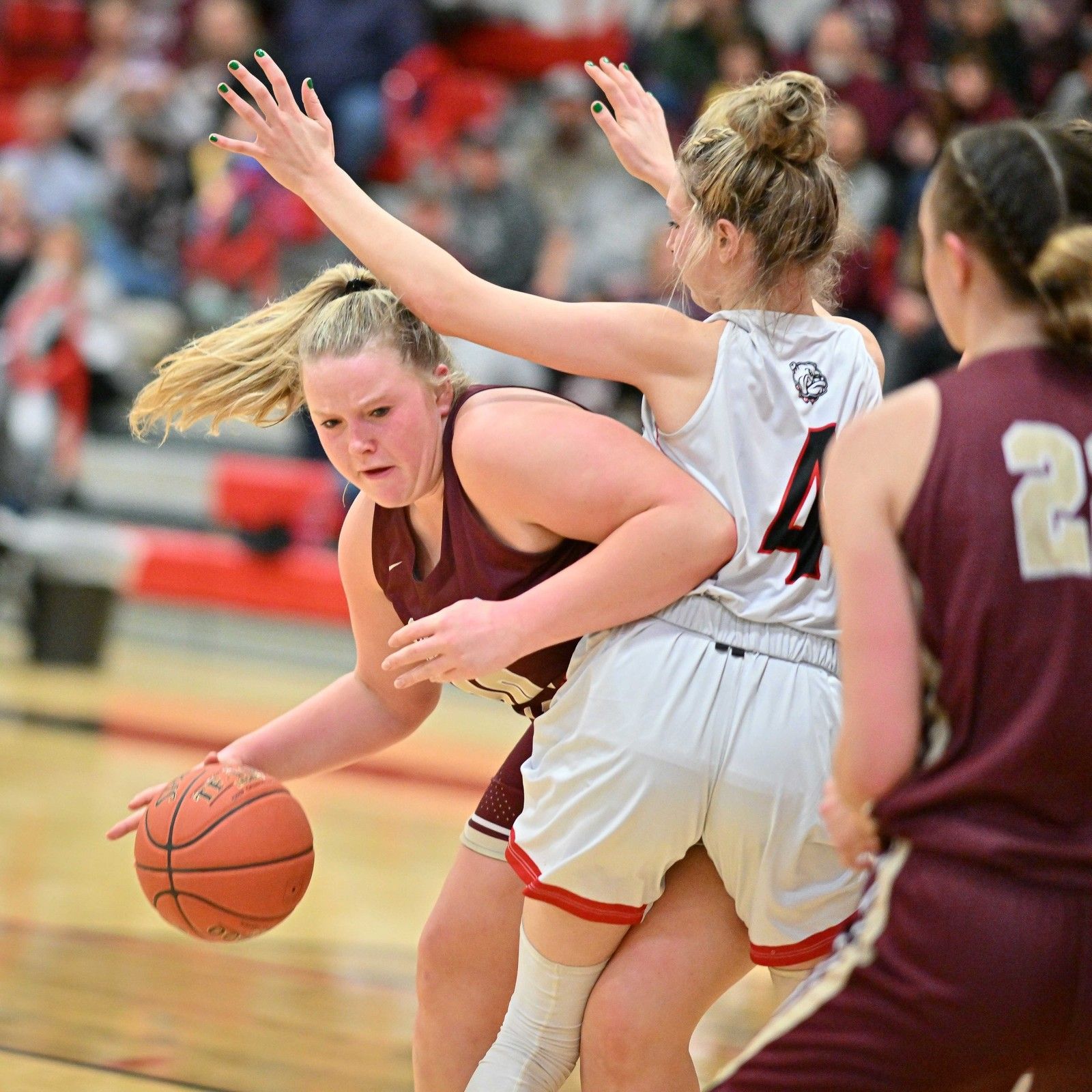 Silver Lake junior Makenzie McDaniel and the 7-0 second-ranked Eagles will be at home Friday to host Riley County. [File photo/TSN]

Silver Lake, No. 2-ranked in Class 3A by the KBCA, continues to roll, remaining unbeaten with an 82-13 Mid-East League romp past Wabaunsee on Tuesday. Silver Lake will be playing Riley County for the second time this season, taking a 45-38 decision over the Falcons back on Dec. 9, the Eagles' closest game of the season. Riley County is coming off a 45-40 overtime win over St. Marys on Tuesday. 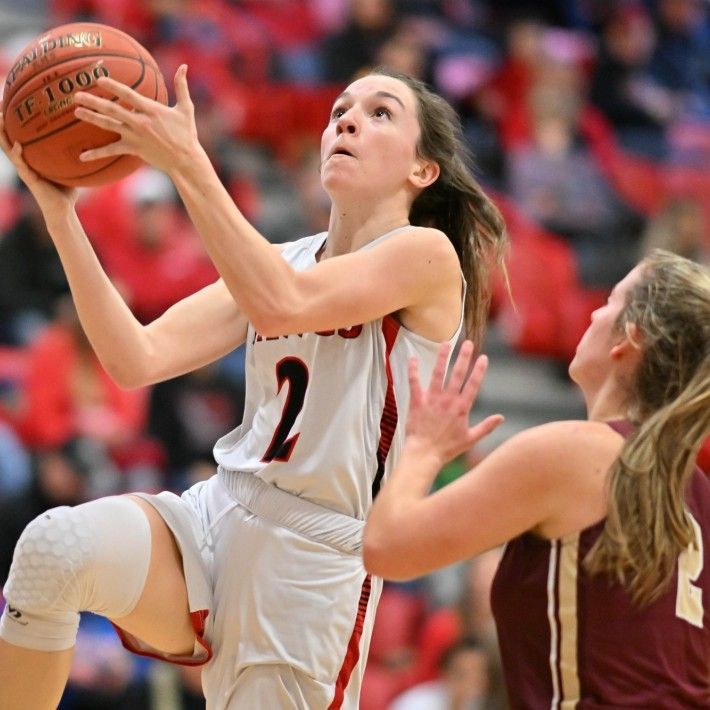 Rossville, No. 10-ranked in Class 3A, bounced back from a 55-53 Mid-East League loss to No. 5-ranked (4A) Rock Creek on Tuesday with a 63-49 non-league win over Valley Heights Thursday night. Sophomore Shyanne Haehn led four players in double figures for the Bulldawgs with 18 points. Rylee Dick and Katie Spielman added 12 points each while Kinsey Perine filled up the stat sheet with 11 points, 12 rebounds, 11 steals and nine assists for Rossville.

Cair Paravel picked up its third victory of the season on Tuesday, posting a 42-16 non-league victory over Kansas School for the Deaf, and will be at home for a Kaw Valley Conference matchup with Olathe Heritage Christian. Heritage Christian is coming off a 57-17 conference win over Bishop Seabury on Tuesday.