Washburn freshmen Gabi Artis, Natalia Figueroa and Yibari Nwidadah combined 44 points as the Ichabod women led from start to finish in a 73-59 MIAA win over Lincoln on Saturday afternoon at Lee Arena. 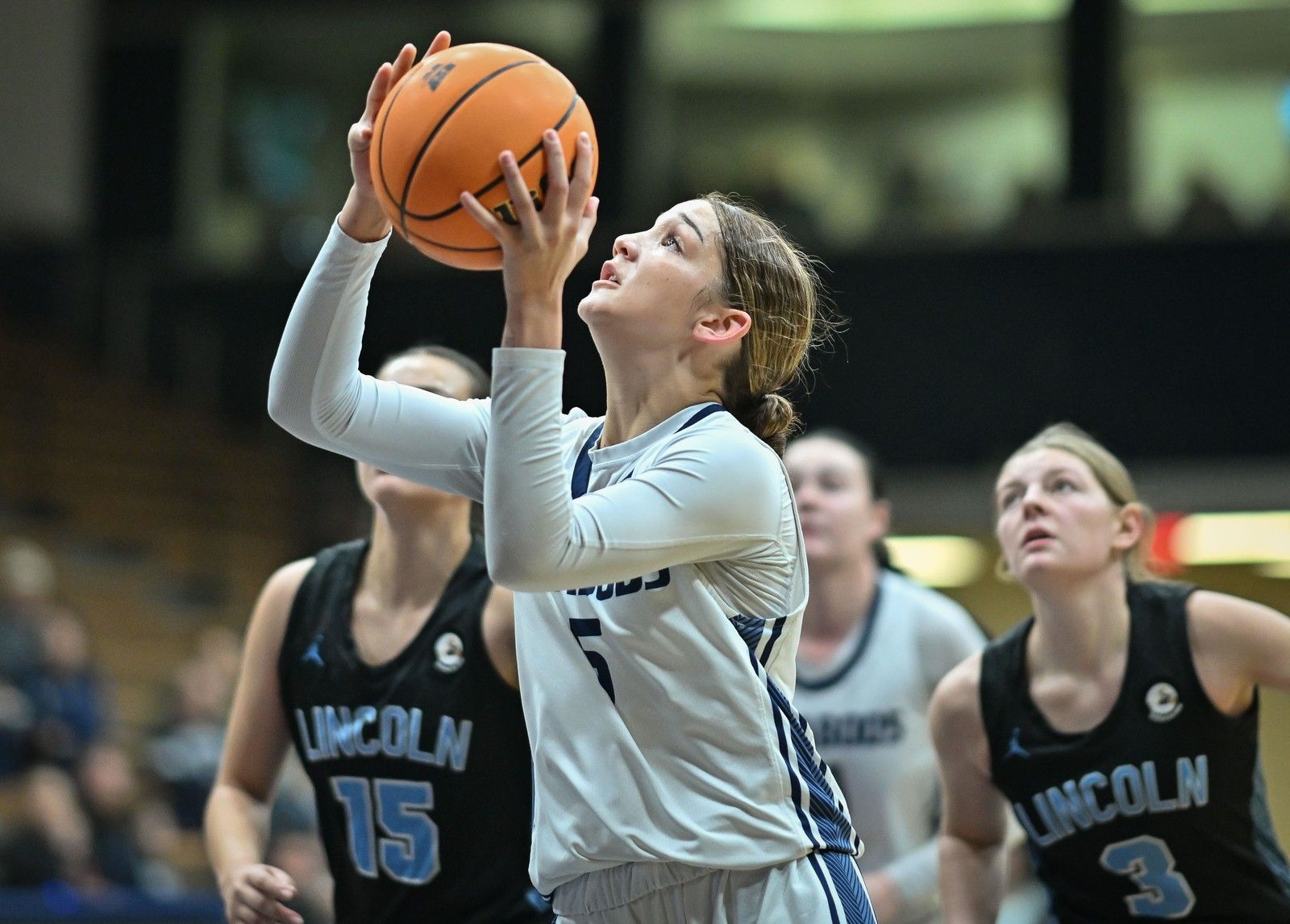 Washburn freshman Gabi Artis had 16 points, 7 rebounds, 5 assists and 2 steals in the Ichabods' 73-59 MIAA win over Lincoln on Saturday. [Photo by Rex Wolf/TSN]

Artis made six of 10 shots from the field to score a career-high 16 points while adding a team-best seven rebounds, five assists and two steals. Figueroa also had a career-best 16 points and made four of seven attempts from 3-point range while Nwidadah totaled a career-high 12 points and five rebounds in just 15 minutes of play.

"I'm just really proud of them,'' Washburn coach Lora Westling said. "They started well and I thought on both ends of the floor they had much better focus. We've got good players, we know we do, and when they work hard and they're focused and they have intention then we see the outcome that we did today so it was a good day for our freshmen.''

Saturday was especially sweet for Artis, who bounced back with a vengeance after going 0 of 11 from the field in Thursday's 67-53 loss to No. 7-ranked Central Missouri.

Artis, the former Bishop Miege standout, got off to a hot start against the Blue Tigers, which she said really helped her confidence.

"It was very important,'' Artis said. "I felt like I knew what was wrong so today I decided to try something new and drive in and see it go in the bucket and then try and shoot it again.

"(Coach) told me to forget about (Thursday) and we're on to the next game. We had a great practice (Friday) so I just repped it out in practice and got more shots up and tried different things.''

The Ichabods, who improved to 7-6 overall and 3-4 in the MIAA, scored on each of their first three possessions to take an early 6-0 lead.

Washburn created a little space again with a 4-0 run to end the opening quarter with a 14-9 advantage. Washburn increased its lead to double-digits in the second quarter as the Ichabods hit seven of 12 from the field and five of seven attempts from 3-point range.

Washburn held a 17-13 advantage when Artis sparked a 13-0 burst, scoring the first seven of those points herself before Figueroa capped off that run with back-to-back 3-pointers.

At the halftime break the Ichabods led 35-24 with the Washburn freshmen trio of Artis, Figueroa and Nwidadah combined for 31 of Washburn's first-half points.

The Ichabod offense continued to roll at the start of the second half and shot 53.9 percent from the field in the third quarter, increasing WU's lead to 18 points, 55-37, heading into the final quarter. A made jumper by junior point guard Aubree Dewey pushed Washburn's lead to a game-high 20 points early in the fourth.

The Blue Tigers slowly cut away at the deficit and made eight of 17 attempts (47 percent) from the floor to pull within nine points with just under a minute left in regulation, but Lincoln would get no closer as the Ichabods scored seven of the final nine points of the game to close out the double-digit win. Washburn finished the afternoon shooting a season-high 50 percent from the field while Lincoln shot 40 percent. The Ichabods were six of 14 from 3-point range and the Blue Tigers four of seven. Washburn outrebounded Lincoln, 35-30.  Macy Doebele rounded out Washburn's four double-figure scorers with 11 points, making all four of her shot attempts and all three of her free throws.  Four players from Lincoln finished in double-figure scoring, led by Le'Yanna McGinnis' 15 points. She also led the team with eight rebounds, three steals, and two blocks.

Washburn will play road games next Thursday at Missouri Southern and Saturday at Pittsburg State.