The 2020-21 high school sports year began last fall with a great deal of uncertainty due to COVID-19 and ended late last month with general optimism about the future.

In between there were a lot of frustrating times as administrators, coaches, athletes and fans were forced to deal with a school year like none other, but '20-'21 also produced moments that all 10 Shawnee County high schools can be proud of, particularly in light of the circumstances.

And while a case could be made for any number of stories to sit at the top of the list, here's one opinion on the Top 10 Shawnee County stories of '20-'21: 1. RURAL RULES -- Washburn Rural became the first school in Kansas to win girls and boys state wrestling championships in the same season while producing five state individual champs. The Junior Blue girls won their second straight Division I championship by a 100-74 margin over Wichita North while Rural win its first-ever Class 6A boys title in a 159.5-112 margin over Olathe North after finishing second two of the previous three seasons. 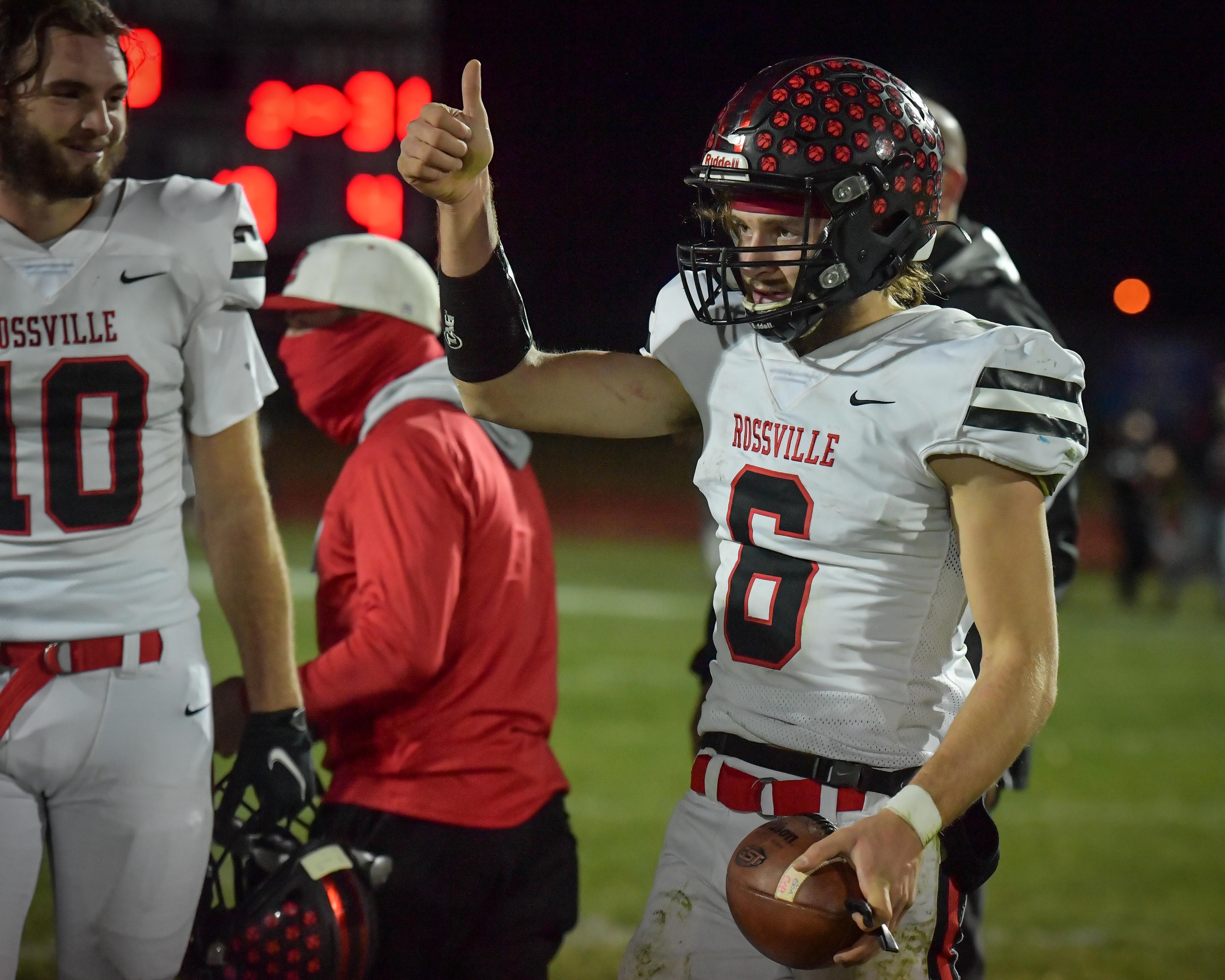 2. DAWG DOMINANCE -- Derick Hammes’ Rossville Bulldawgs captured their fourth state football title since 2014, capping a perfect 13-0 season with a 27-20 win over previously-unbeaten Hoisington in the Class 2A state championship game. Rossville had earlier won three straight state championships in '14, '15 and '16. 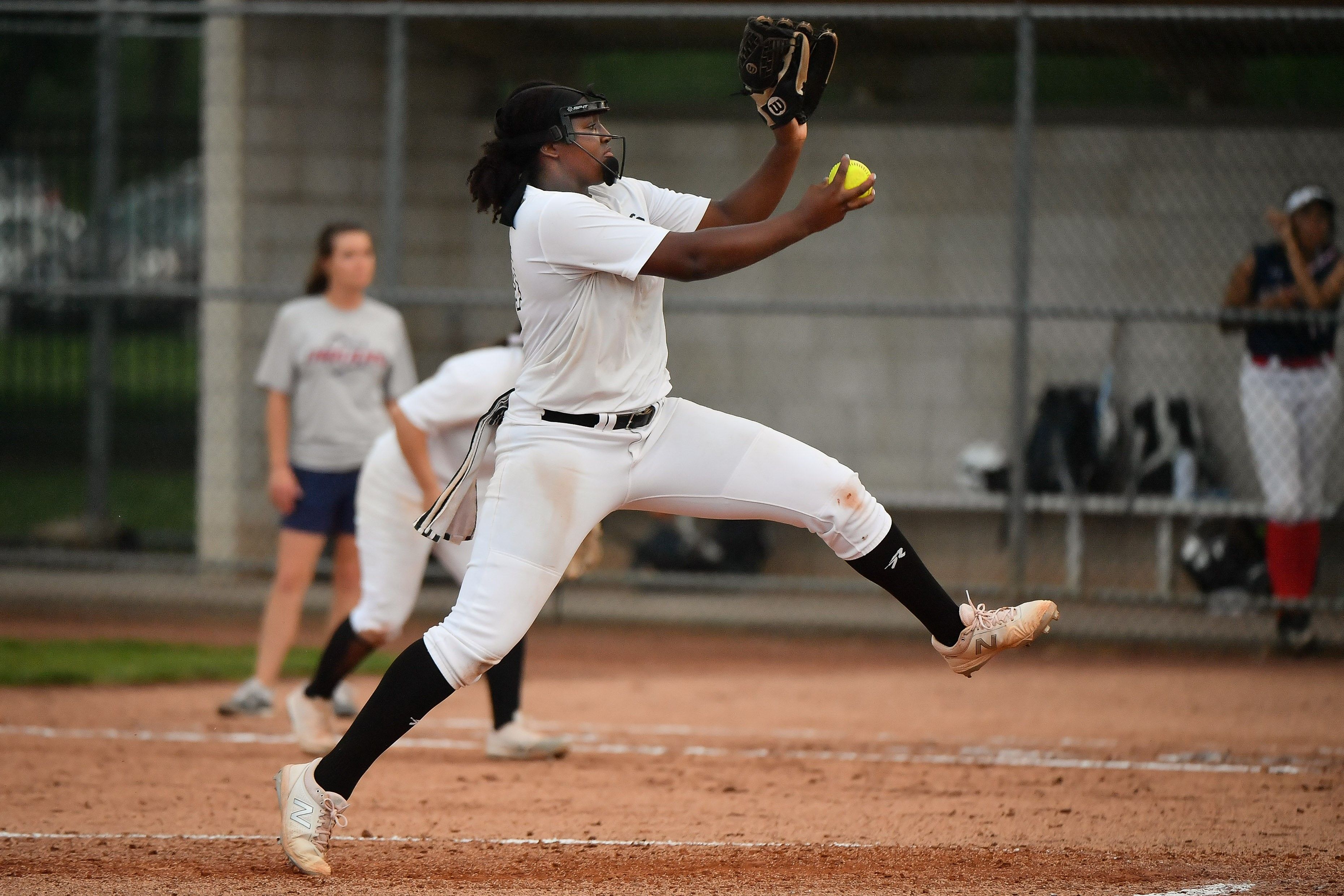 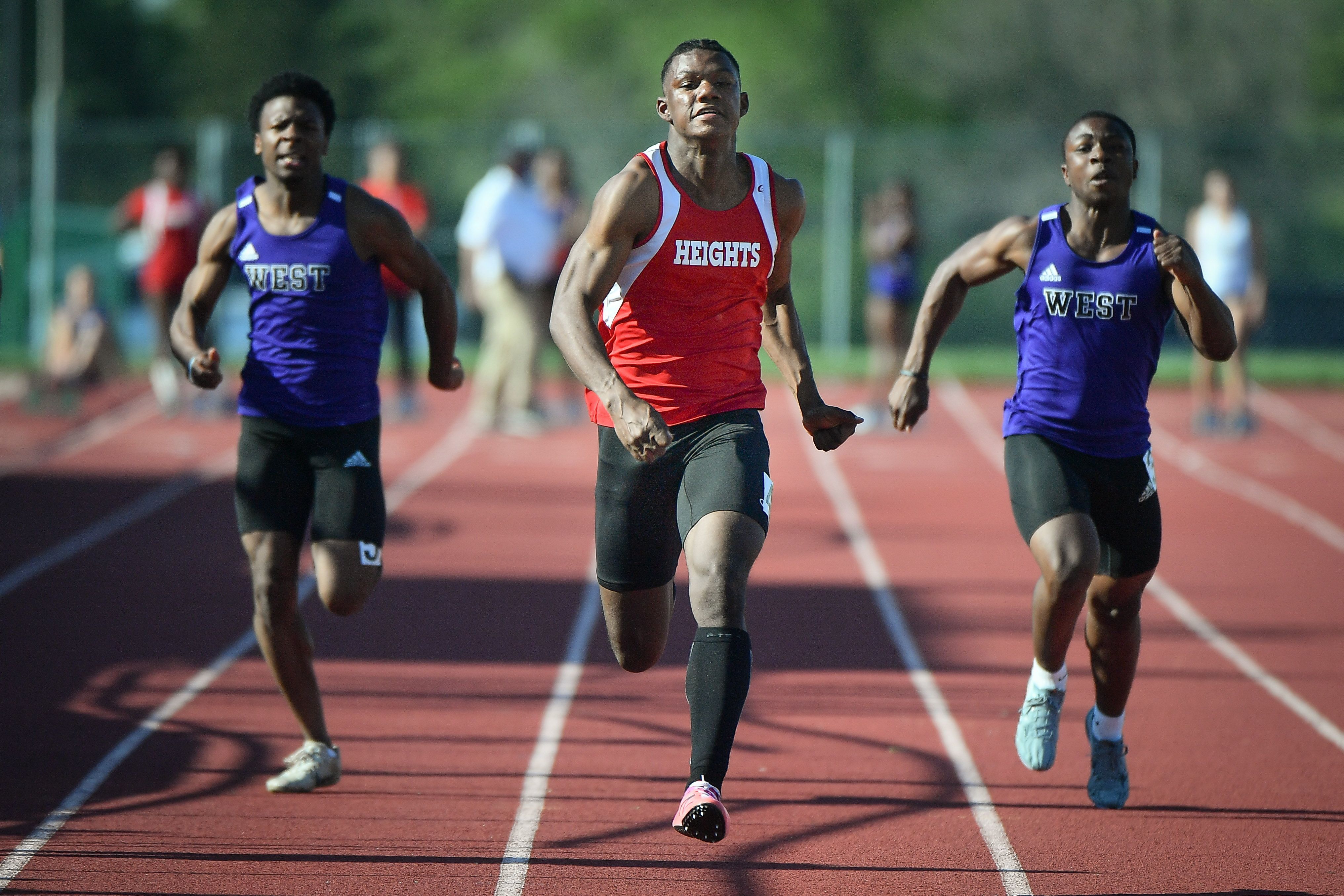 4. SUPER SOPH -- Shawnee Heights sophomore star sprinter/hurdler Jeremiah Smith began his first high school track season with a school-record performance in the 100-meter dash and ended it with a three-gold-medal performance in the State Track and Field Championships at Wichita State's Cessna Stadium, sweeping Class 5A titles in the 100, 200 and the 110-meter high hurdles. 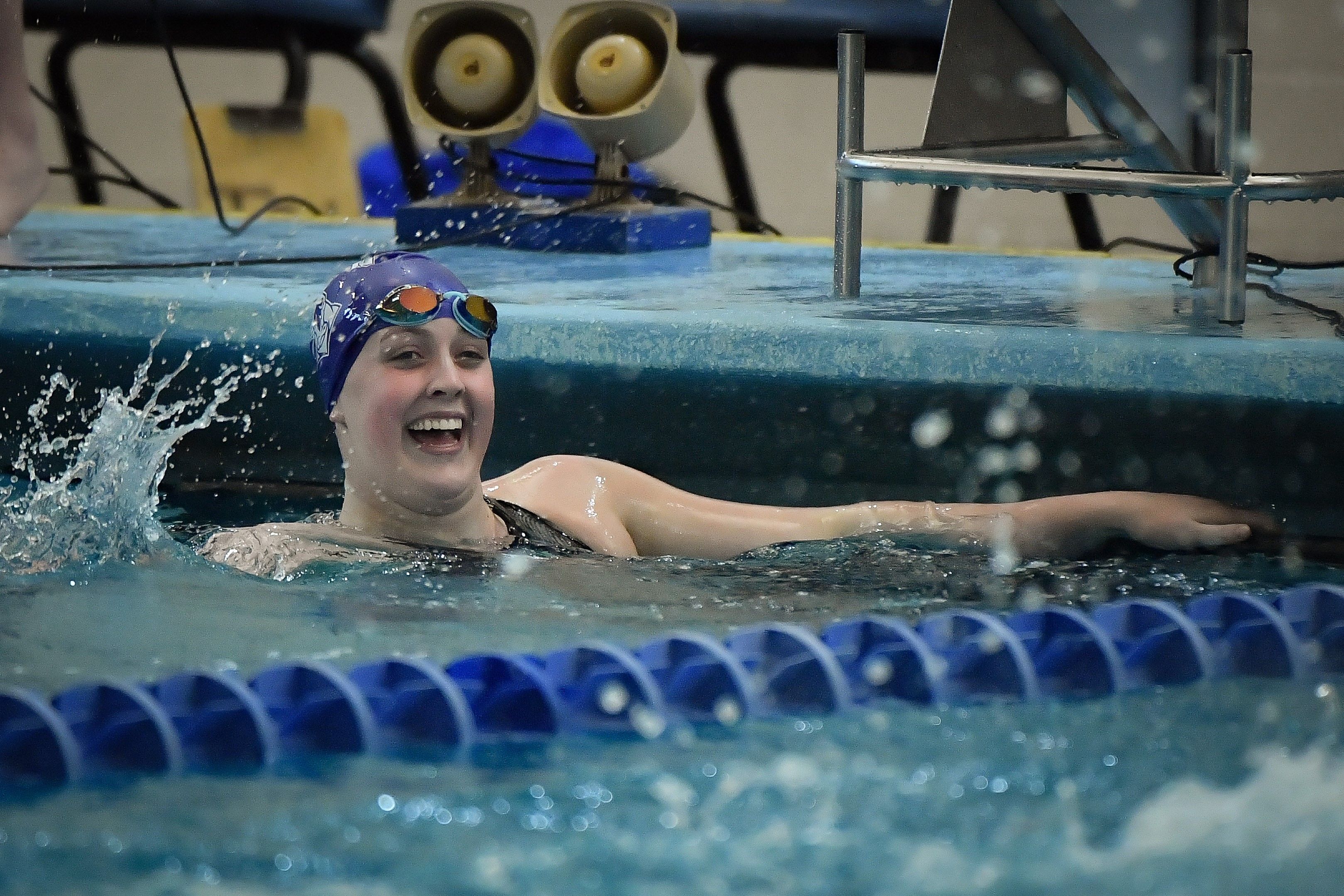 Topeka West junior Kadence Jeffries reacted after winning the Class 5A-1A state title in the 200 freestyle. Jeffries is a four-time state champ, sweeping the 200 and 500 free events as a freshman and junior. [File photo/TSN]

6. BACK WITH A SPLASH -- After posting a pair of dominating state championships as a freshman, Topeka West swimming star Kadence Jeffries had her sophomore season wiped out by COVID-19. Getting a chance to compete again this spring, Jeffries picked up where she left off, dominating the 200-yard freestyle and 500 free events for the second time in the Class 5A-1A state meet. Jeffries, a two-time All-State first-teamer, won the 200 free by three and a half seconds and the 500 by 20 seconds. 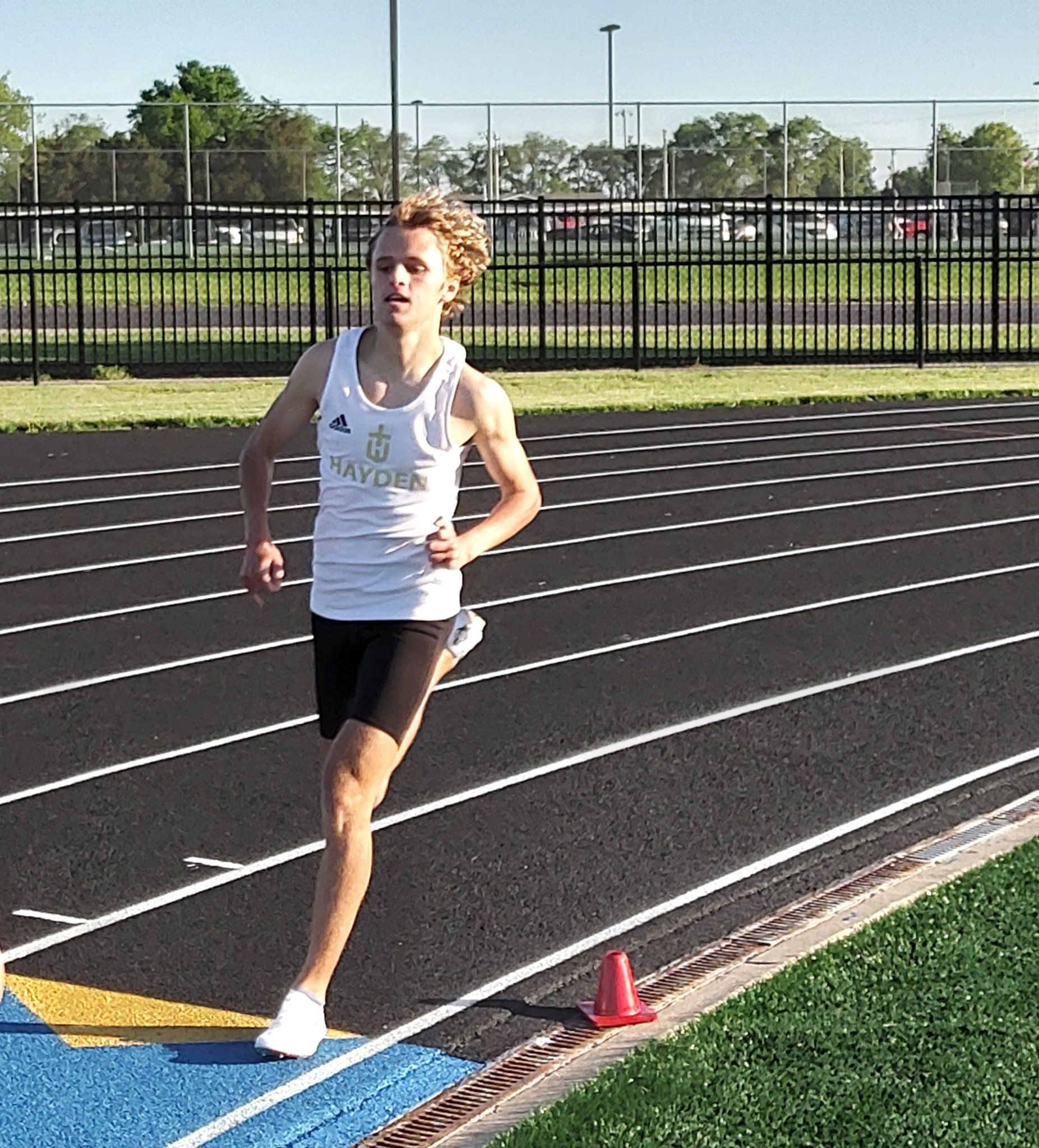 7. TANNER TERRIFIC -- Hayden junior cross country star Tanner Newkirk, who had finished second in the 4A state meet as a sophomore, captured his first state championship and his third straight state medal last fall, clocking a 5-kilometer time of 15 minutes, 53.32 seconds to win by more than three seconds. Newkirk was also the Shawnee County leader in the 800, 1,600 and 3,200-meter runs in track this spring before an injury kept him out of the state meet. 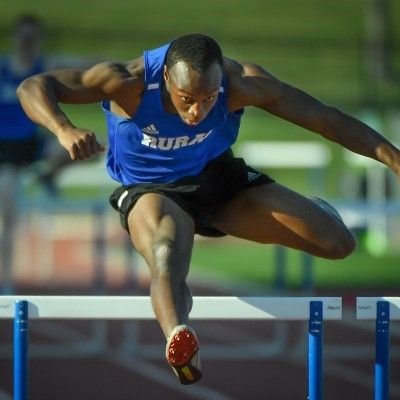 Washburn Rural senior Marquel Russell won the Class 6A state title in the 110-meter high hurdles, following a second-place state finish as a freshman and a fourth-place showing as a sophomore. [File photo/TSN]

8. A STORYBOOK ENDING -- Washburn Rural senior Marquel Russell has faced and overcome challenge after challenge after being born with a severe brain condition and ended his high school career in true storybook fashion, winning the Class 6A state championship in the 110-meter hurdles in the fastest time of his career (14.79 seconds) and earning his third state medal in as many as state-meet appearances.

Russell was one of three Shawnee County athletes to claim state hurdles titles, with Smith winning the 110 highs in 5A and Hayden sophomore Jake Muller winning the 300-meter title in 4A. Also earning boys state titles in a strong performance by county athletes were Rural junior Zsamar Sipper in the 6A boys triple jump, Seaman senior JahnAsia Anderson in the 5A girls shot put and Rossville senior Woodrow Rezac in the 3A boys 200-meter dash. 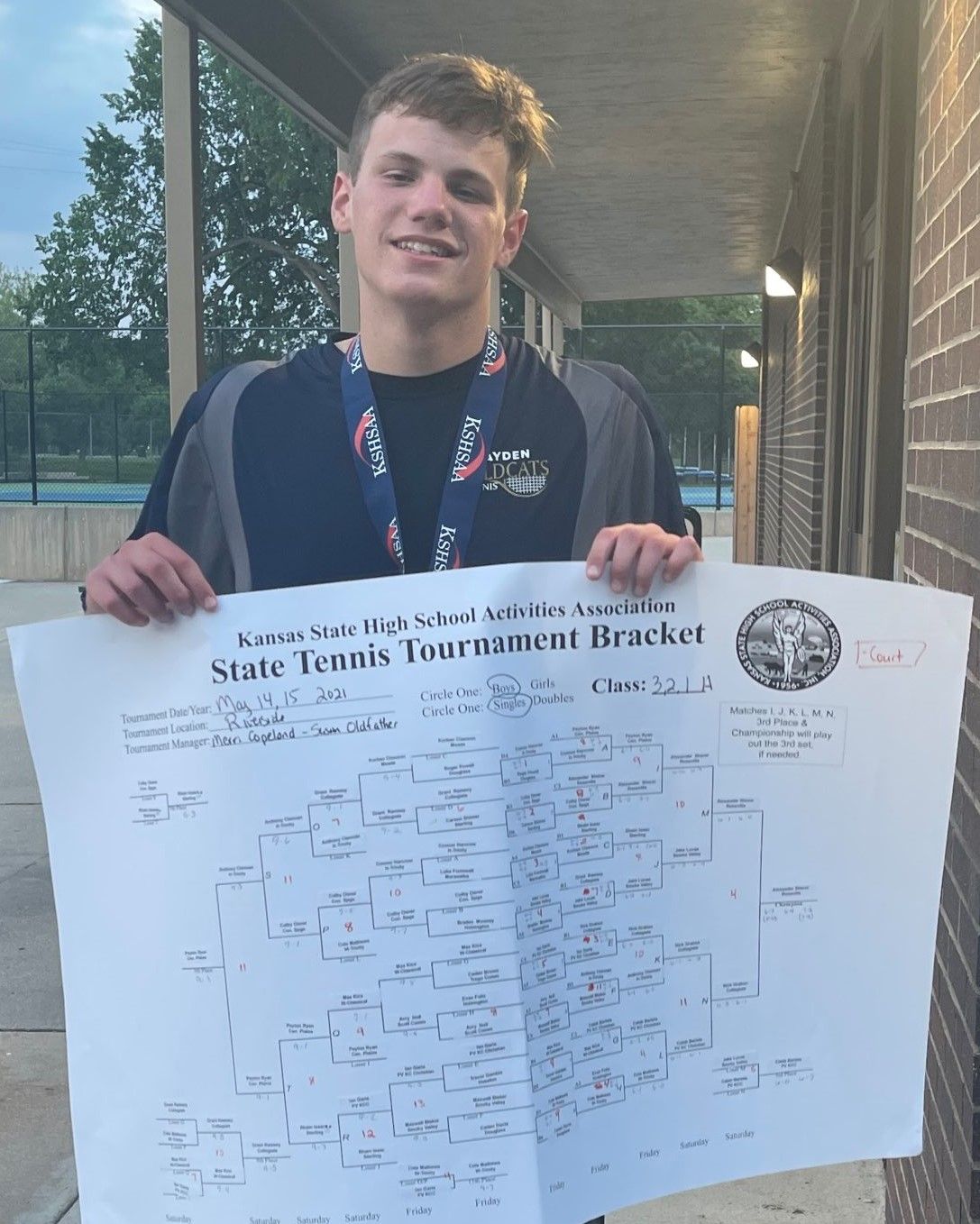 9. PUTTING THE DAWGS ON THE MAP -- Technically, Rossville does not have a boys tennis program, but thanks to senior Alex Sherer, the Bulldawgs do have a state champion. After competing as a co-op player for Hayden in the regular season, Sherer represented Rossville in the Class 3A-1A postseason, ending his only high school season with a state singles title. 10. STATEMENT SEASON(S) -- For only the third time in school history, Topeka West's boys basketball team advanced to the state championship game, dropping a 55-43 decision in the Class 5A final at Emporia's historic White Auditorium. And although Rick Bloomquist's team came up short of claiming what would have been West's first state boys title, the Chargers went 20-3 on the season, establishing themselves as one of the state's premier teams. Topeka High's girls basketball team, meanwhile, continued its dominating stretch, losing to Shawnee Mission Northwest 61-54 in the 6A final. Hannah Alexander's Trojans also played in the championship game in 2019, finishing second to city rival Washburn Rural, and had their quest for a perfect season in 2019-20 stopped by COVID-19 when the state tournament was cancelled after the first round.

Perennial state power Silver Lake also advanced to the 3A state championship game in softball, dropping a 1-0 decision to Cheney in the title game. 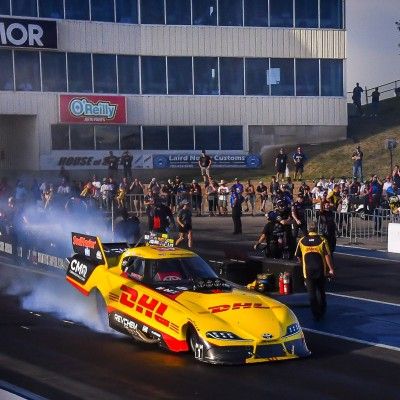