Washburn volleyball team will host the Spring MIAA Volleyball Tournament Friday and Saturday at Lee Arena, with the Ichabods opening their tournament bid with a 1 p.m. Friday match against Northwest Missouri State.

Washburn will take a 13-4 overall record and 5-3 MIAA mark into its opening match while Northwest Missouri is 12-2, 6-2.

Top North Division seed Nebraska-Kearney (13-3, 7-1) will face the Newman-Pittsburg State winner at 3 o'clock on Court 1 while Missouri Southern (6-11, 5-3) will take on the Central Oklahoma-Fort Hays State winner on Court 2.

No. 1 South Division seed Central Missouri (10-3, 8-0) will close out Friday's schedule at 5 o'clock on Court 1 against the winner of the Emporia State-Missouri Western match.

The tournament semifinals will be played at 11 a.m. and 1 p.m. on Saturday, followed by the championship match at 4 o'clock.

Coming off a team championship in last week's Mules Invitational, Washburn University's No. 15-ranked Ichabods golf team is closing out its regular season in the NSU Classic at the Muskogee (Okla.) Country Club.

Washburn golf team was tied for sixth place as a team after a shortened first day of the tournament on Monday due to lightning in the area.

The tournament is scheduled to resume at 9 a.m. on Tuesday morning, with competitors finishing up their last few holes in the second round, before beginning the third and final round.

Jackson Wexler currently sits at 19th place with a first round score of 69 and a 2-over-par score in the second round.

Washburn junior Raul-Alin Dicu was named the MIAA Men's Tennis Athlete of the Week of the North Division, the conference office announced this afternoon. This is the second time Dicu earned the accolade this season and the third time in his career.

The No. 17-ranked Ichabods took a 6-1 win over Bethel College Sunday, bouncing back from a 4-0 loss to Southern Arkansas in their first watch of the weekend.

With the win over the Threshers Washburn improved to 10-3 on the season.

Washburn will host an exhibition match against Cowley County Community College on Thursday at 1 p.m. at Washburn Tennis Complex before closing out the season against MIAA foe Northwest Missouri on April 24 at 1 p.m. 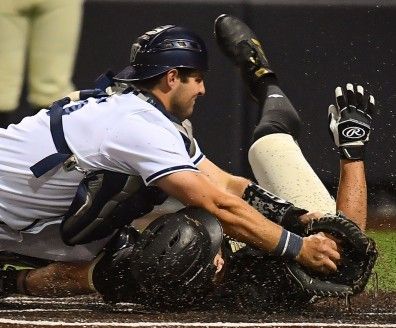 Coming off a 2-1 series win over Emporia State, Washburn's baseball team will take on MIAA foe Rogers State for the first time in program history Friday and Saturday at Falley Field.

The Ichabods (10-17 overall, 9-12 in the MIAA) split last Saturday's doubleheader against Emporia State, bouncing back from a 13-10 first-game loss before closing out the series victory with a 5-4 come-from-behind win.

Peter Shearer had a pair of homers on the day for WU.

For the second week in a row Washburn's Peyton Lane set the school record in the men's pole vault, posting a second-place finish in the Wichita State open while recording an NCAA provisional mark of 4.87 meters (15 feet, 11.75 inches), topping his previous mark of 4.80 meters.

The Ichabods will be back in action next week at the KT Woodman Combined on Wednesday and Thursday in Wichita and the UCM Relays on Friday.