Hayden, which advanced to the Class 3A sub-state round, and 6A sectional partcipant Washburn Rural combined for 11 Top 22 spots on TopSports.news'  All-Shawnee County football team while Highland Park's Tre Richardson and Rural's Ty Weber garnered the top individual honors. 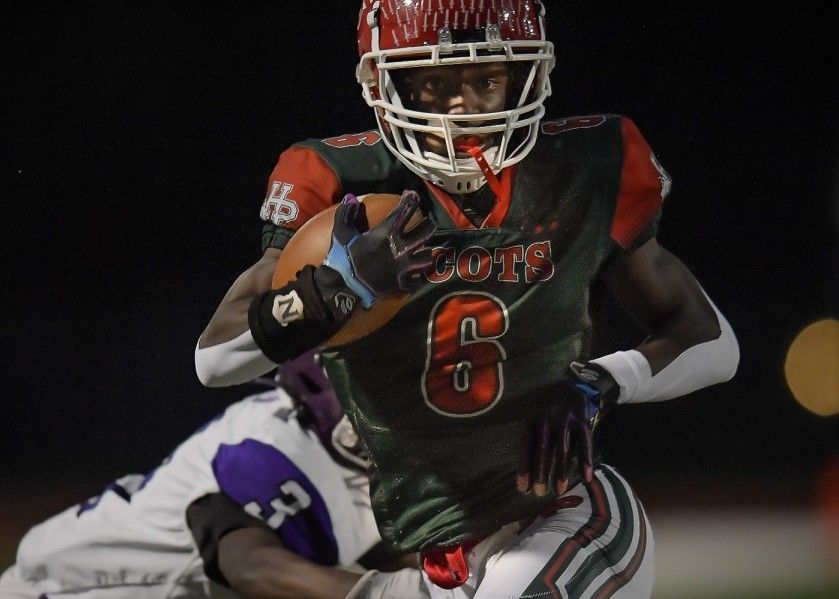 Senior Tre Richardson has been named the TopSports.news Shawnee County offensive player of the year after keying a dramatic Highland Park turnaround in the 2022 season. [File photo/TSN] 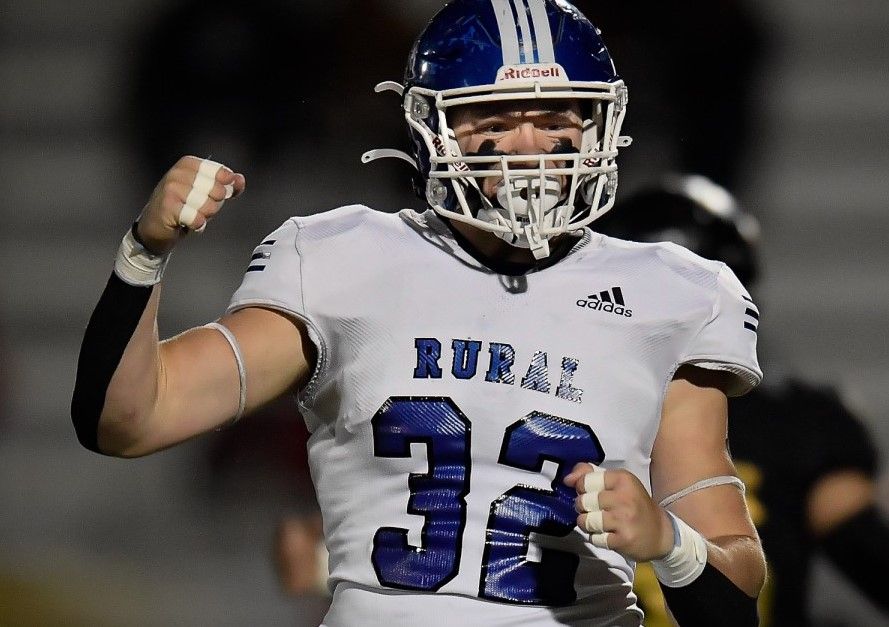 Hayden, which posted a 10-2 record this fall, is represented on the Top 22 by seniors JC Cummings, Ben Evans and Joe Otting, junior Finn Dunshee and sophomore Jensen Schrickel while Washburn Rural, 8-3 on the year, put seniors Weber and Ma'kenttis Adams and juniors Packson Bettis, Branton DeWeese, JC Heim and Titan Osburn on the Top 22.

Richardson, a 5-foot-11, 175-pound senior, rushed for 1,964 yards and 27 touchdowns on 96 attempts and caught 40 passes for 1,079 yards and 15 TDs as the Scots snapped a 65-game losing streak in the season-opener and went on to record one of Highland Park's best seasons in school history.

Hayden's Bill Arnold has been named the Shawnee County co-coach of the year after a 10-2 2022 season. [File photo/TSN] 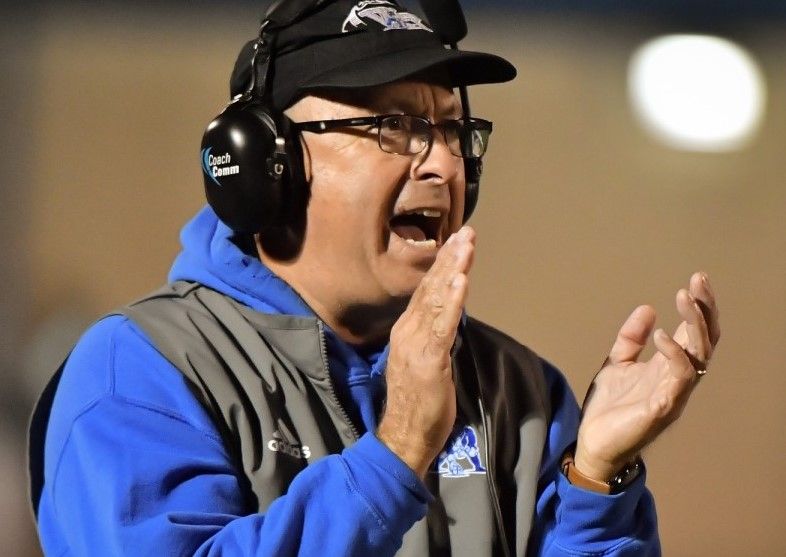 Washburn Rural's Steve Buhler has been named the Shawnee County co-coach of the year after leading the Rural to the Class 6A sectional round. [File photo/TSN] 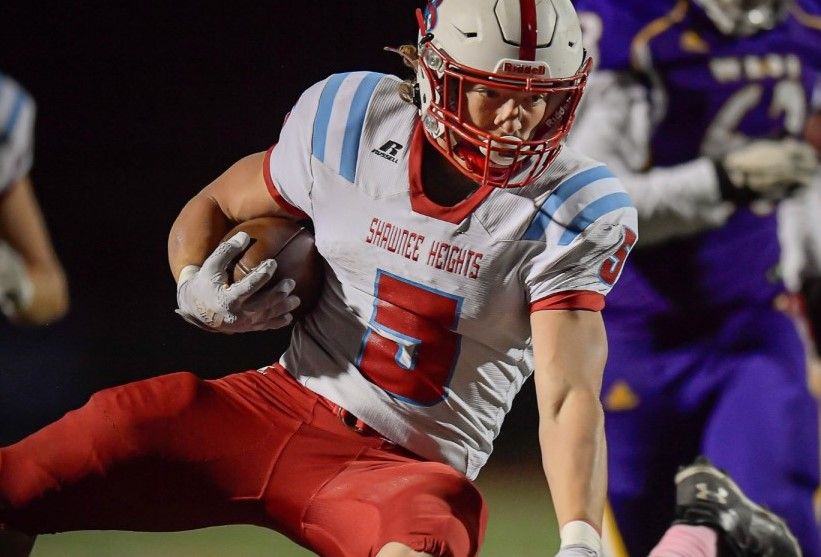 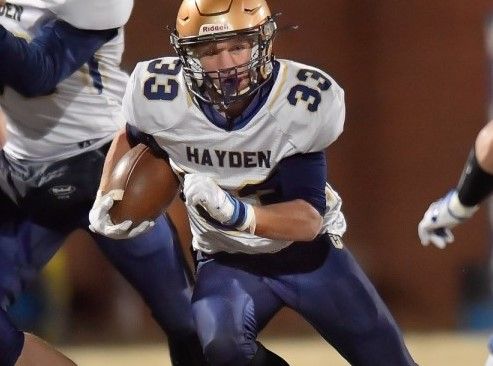 Hayden junior Finn Dunshee has been named the Shawnee County offensive co-newcomer of the year after rushing for 1,150 yards and scoring 17 touchdowns. [File photo/TSN] 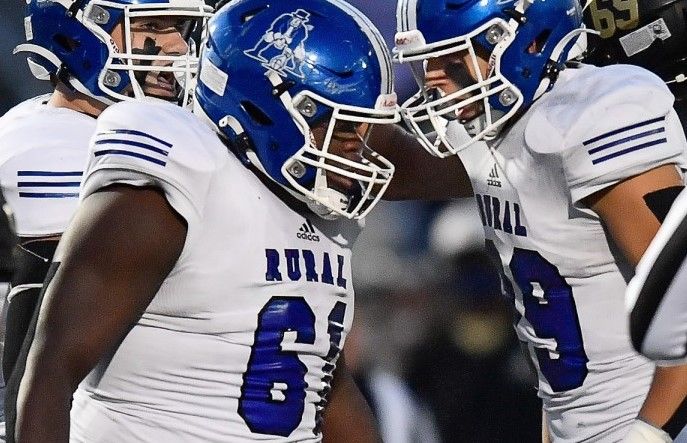 Lane, 6-0, 280, was in on 44 tackles (23 solos) with six sacks, six tackles for loss, five forced fumbles, two fumble recoveries and an interception return for a touchdown.

Seaman is represented on the Top 22 by seniors Kasen Hasenkamp, Sean Miller and Bryson Vawter, while Shawnee Heights put Baughman and senior Gavin Zuperku on the Top 22, Silver Lake is represented by juniors Eli Barnes and Tanner Martin, Rossville by Carver and junior Barrett Lietz and Topeka West by senior Malachi Berg.

All 10 Shawnee County high schools have representatives on either the Top 22 or Second 22 teams.

A 5-8, 180 junior running back, Baughman was named the TopSports.news co-offensive newcomer of the year after rushing for 1,496 yards and 20 touchowns on 225 carries for the 5-5 T-Birds. Baughman, a first-team All-United Kansas Conference pick, rushed for more than 100 yards in seven games, including 284-yard and 222-yard performances.

A four-year starter at quarterback for the Chargers the 6-2, 190 senior passed for 1,413 yards and five touchdowns while completing 53 percent of his passes. Berg, who is also a basketball standout for West, rushed for 845 yards and nine TDs and also contributed a receiving touchdown and a kickoff return for a TD.

Bettis, a 6-3, 235 junior defensive end, recorded 61 tackles (38 solos) with 10 sacks, 13 tackles for loss, 12 quarterback pressures and a forced fumble to play a key role for a Washburn Rural team that posted an 8-3 record and advanced to the third round (sectional) of the 6A playofffs.

A 6-2, 300 offensive tackle, Carver is a four-year starter for Rossville, helping the Bulldawgs win two 2A state championships, and is a repeat selection on the TopSports.news All-Shawnee County Top 22. Carver is also a star wrestler for Rossville, advancing to the 3A-1A state championship match last season and finishing second. Carver was also All-County in wrestling.

Cummings, a 5-10, 189 senior running back/linebacker, was a leader for Hayden's defensive unit while also rushing for 652 yards on 75 carries, catching six passes for 123 yards and scoring nine touchdowns. Cummings helped the Wildcats post a 10-2 record and reach the 3A sub-state round in the 2022 season.

Dunshee, 5-8, 160 running back/linebacker, rushed for 1,150 yards on 96 attempts and scored 17 total touchdowns for the 10-2 Wildcats, who advanced to the sub-state round of the 3A playoffs. The all-county co-offensive newcomer of the year, Dunshee caught 10 passes for 207 yards and had five kickoff returns for 231 yards. Dunshee scored on offensive, defense and special teams for Hayden.

A 6-2, 275 offensive and defensive lineman, Evans was a multi-year starter for the Wildcats, who went 10-2 this past season and advanced to the sub-state round in the 3A playoffs. Evans helped pave the way for a Hayden offensive unit that rushed for 3,032 yards and finished the year with 4,465 yards of total offense.

A 6-0, 205 senior defensive lineman, Hasenkamp was a leader in the trenches for the 4-4 Vikings, recording 45 tackles with 11 tackles for loss, six sacks and a forced fumble. Hasenkamp received second-team All-United Kansas Conference recognition on defense as a senior.

Heim, a 6-3, 215 junior outside linebacker, was in on 73 tackles (48 solos) with 15 tackles for loss, five sacks, seven quarterback pressures, five forced fumbles, three recovered fumbles (one for a touchdown) and three blocked punts to help lead Washburn Rural to an 8-3 record and the sectional round of the 6A playoffs.

A 6-0, 235 junior, Lietz was a standout on both sides of the ball for the 5-5 Bulldawgs at offensive guard and defensive end this fall after playing a key role for Rossville's 2A state championship team in 2021. Lietz was in on 35 tackles this past season with six sacks and six tackles for loss.

Miller, a 6-2, 230 senior offensive/defensive lineman for the 4-4 Vikings, served as team captain for Seaman and was a first-team All-United Kansas Conference selection on offense as a center. As a junior, Miller earned All-Centennial League second-team recognition before the Vikings moved to the UKC this fall.

A 6-2, 175 junior wide receiver, Osburn had a breakout season for the 8-3 Junior Blues, catching 32 passes for 668 yards and 12 touchdowns while averaging 21.1 yards per catch. Osburn helped Washburn Rural win a pair of playoff games to reach the sectional round of the 6A playoffs.

Otting, a 6-5, 281 offensive and defensive lineman, is a three-sport standout for the Wildcats who has made an oral commitment to play football at Notre Dame. Otting is an TSN All-Shawnee County Top 22 repeat pick and was also an all-county basketball selection last season and qualified for the state track meet. Otting helped lead the Wildcats to a 10-2 record and a 3A sub-state berth this fall.

Also a standout in basketball and a state champion in track and field, Richardson, a 5-11, 175 senior, is a repeat TSN All-Shawnee County Top 22 selection and earned first-team All-Meadowlark Conferenc recognition at receiver and was named conference offensive player of the year. Richardson rushed for 1,964 yards and 27 touchdowns on 96 attempts and caught 40 passes for 1,079 yards and 15 TDs. Richardson also had 868 return yards and passed for 144 yards and three TDs.

Schrickel, a 5-9, 145 sophomore, was a standout on offense, defense and special teams for the 10-2 Wildcats, who made it to the 3A sub-state round. Schrickel caught 35 passes for 686 yards, carried the ball 10 times for 182 yards, kicked two field goals and 31 of 33 extra points, had three punt returns for 124 yards four kickoff returns for 126 yards. Schrickel scored 18 total touchdowns

A 6-1, 210 senior running back/linebacker, Vawter rushed for 626 yards and eight touchdowns for the 4-4 Vikings and also registered 62 tackles with six tackles for loss and a fumble recovery. Also an All-Stater in baseball, Vawter was an All-United Kansas Conference first-team selection at running back and received honorable mention at linebacker. Vawter received second-team All-Centennial League honors as a junior.

Weber, a 6-3, 230 senior inside linebacker, was named the TopSports.news Shawnee County defensive player of the year for the second straight seaon after helping lead the Junior Blues to an 8-3 record and the third round of the 6A playoffs. Weber recorded 134 total tackles (82 solos) with 19 tackles for loss, three forced fumbles, three recovered fumbles, two sacks and an interception.

A 6-1, 240 senior offensive lineman, Zuperku was a three-year starter for the T-Birds, who posted a 5-5 record in the 2022 season. Zuperku earned first-team All-United Kansas Conference honors as a senior after helping pave the way for Shawnee Heights to gain 2,014 rushing yards and 2,644 total yards this fall. 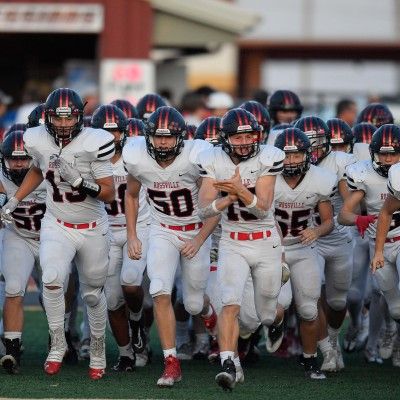