The Washburn Ichabods closed the first half on a 27-6 run, rolling to a 75-46 win over No. 18-ranked Augustana in Saturday's final game of the Central Region Challenge in Municipal Auditorium with WU leveling its record at 1-1 on the season. Washburn will have its home opener on Wednesday at 7 p.m. against William Jewell. 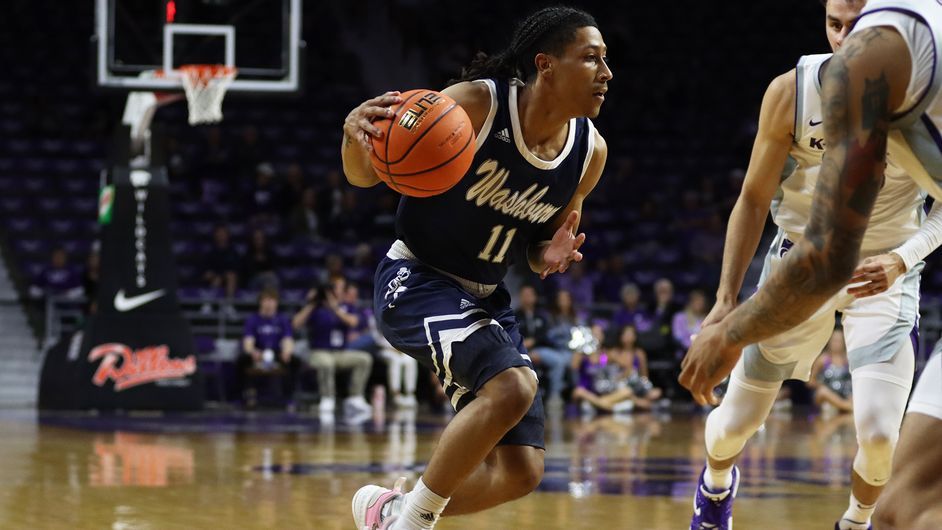 Sophomore Jaden Monday scored a career-high 22 points with six 3-pointers as Washburn rolled to a 75-46 win over No. 18-ranked Augustana Saturday in Kansas City, Mo. [Photo courtesy of Washburn Athletics]With the Ichabods trailing 13-7 with 14:39 to play in the opening half after starting the game 2 of 8 from the field, Washburn scored the next 12 points of the game, hitting 4 of 6 shots while holding Augustana (1-1) to an 0 of 7 spurt to go up 19-13 with 6:59 to play in the half.

After a free throw by the Vikings, Washburn finished the half on a 12-2 run to take a 34-19 lead into the break.

Washburn held Augustana to 5 of 24 shooting in the first half while the Ichabods were 11 of 27.

Sophomore Jaden Monday led the Ichabods with a career-high 22 points, going 6 of 12 from 3-point range.

Freshman Jarmell Johnson scored 13 off the bench and Connor Deffebaugh scored 10 with a career-high seven assists.

Sophomore Andrew Orr had a career-high nine rebounds adding eight points and sophomore Michael Keeganhad nine boards and two blocks with two steals.Washburn finished 28 of 58 from the field going, 11 of 25 from 3-point range and hitting 8 of 11 free throws. Augustana was 14 of 47 (29 percent) and 4 of 23 from 3-point range.Washburn held a 40 to 27 advantage on the glass and turned 22 Viking turnovers into 25 points.

Washburn will have its home opener on Wednesday at 7 p.m. against William Jewell.