Washburn Rural, which won its eighth Class 6A state championship and its first in 10 seasons, put four players on the TopSports.news All-Shawnee County volleyball team, led by two-time player of the year Brooklyn DeLeye.

DeLeye, a senior, is joined on the all-county first team by senior Taylor Russell and juniors Zoe Canfield and Jada Ingram while veteran Junior Blues coach Kevin Bordewick, who went over the 1,000-win mark for his career in 2022, was named the coach of the year after Rural went 45-1 on the season with 44 straight wins to end the year.

State placers Rural and Seaman, fourth in 5A, combined to earn seven of 13 first-team berths.

The Vikings, who posted a 32-11 record and won the United Kansas Conference title, are represented on the first team by senior Laynee Brown, junior Brooklyn Gormley and sophomore Maegan Mills.

Brown, DeLeye, Ingram, Jones, Loy, Perine and Russell are all repeat first-team selections while Canfield, Dyche, Gormley and Mills were second-team picks a year ago and Ross and Rottinghauls received honorable mention.

Hayden freshman Reese Huscher was named the county newcomer of the year after compiling 148 kills, 254 digs and serving at 97 percent.

LAYNEE BROWN, Seaman -- A senior, Brown was an All-United Kansas Conference first-team pick after the Vikings posted a 30-11 record and finished fourth in the 5A state tournament for the second straight season.

"Laynee has been a core part of our team for the last three years as the starting libero and a DS the year before that,'' Seaman coach Tatiana Dowling said. "She is constantly communicating and stepped up as the main leader this year. I’m so proud of her for shouldering that weight, because it was not an easy position to be in. She is loved by her teammates and coaches and I have no doubt she’ll be successful at Butler because of the teammate, athlete, student and person that she is.''

ZOE CANFIELD, Washburn Rural -- Canfield, a junior, moves up to the All-Shawnee County first team after being a second-team pick as a sophomore. Canfield has competed in three straight state tournaments for the Junior Blues.

"She had a great year, running a 5-1 offense for the first time in her high school career and made great strides and improvements over the summer and all through the season,'' Washburn Rural coach Kevin Bordewick said. "Zoe is a competitor and has a great work ethic, and she was a huge part of our phenomenal year, running our offense so efficiently. She is a great teammate and takes a lot of pride in how well her team does.''

BROOKLYN DeLEYE, Washburn Rural -- DeLeye, a senior who is headed to Kentucky, received All-Class 6A State Tournament recognition for the fourth straight season after leading the Junior Blues to a 45-1 record and the eighth 6A title in school history. DeLeye played on Rural teams that finished first, second, third and fourth at state.

"Brooklyn is arguably the best player to ever come out of Topeka at her position, and she reached rare territory in becoming what is believed to be the third player to ever get 2,000 kills in a career in Kansas,'' Bordewick said. "She is a solid six-rotation player, she competes, has a drive to succeed, and yet is humble about what she does and who she is. She has set a high standard for all volleyball players at Washburn Rural.''

BRINLEY DYCHE, Rossville -- Dyche, a senior libero, moves up to the All-Shawnee County first team this season after being a second-team pick a year ago and is a two-time unanimous All-Mid-East lead choice.

A four-year starter for the Bulldawgs, Dyche recorded 439 digs for the 34-6 Mid-East League champs while registering 37 service aces and serving at 96.7 percent. Dyche has 183 career aces and 1,575 career digs.

"Brin has been a huge asset for us since her freshman year,'' Rossville coach Thomas Colwell III said. "Brinley impresses me every day in practice and in games, putting up perfect passes to the setter more often than not. She's the most consistent player I've ever had the opportunity to coach.''

BROOKLYN GORMLEY, Seaman -- Gormley, a junior, moves up to the All-Shawnee County first team this season after being a second-team pick as a sophomore and was also an All-United Kansas Conference first-team pick and All-Class 5A State Tournament selection.

Gormley registered 275 kills for the 32-11 Vikings this fall while hitting at a .257 clip and had 70 total blocks. Gormley also recorded 65 digs and 57 service aces, helping Seaman post a fourth-place finish in 5A.

"Brooklyn has been a huge force for us offensively this year,'' Dowling said. "She truly understands what hard work is and she is willing to put in that work to accomplish her goals. I couldn’t be more proud of the player and teammate she has become this year. She’s definitely someone we depended on and will depend on in the future.''

JADA INGRAM, Washburn Rural -- Ingram, a junior, was an All-Class 6A State Tournament selection after helping the Junior Blues go 45-1 on the season with 44 straight victories, capped by a state championship.

"An incredible athlete, Jada improved her hitting tremendously this year, especially in running slides and running faster tempo sets from the middle,'' Bordewick said. "She led us in block kills with 55, and was much more aggressive with her serving that led to aces or getting free balls from the opponent. She brings a lot of energy to the court and is one of our inspirational leaders. Jada was a huge part of our success this year.''

Jones had 260 kills on the season for Topeka West while also finishing with 51 solo blocks as the Chargers posted a 24-12 record.

EMILY LOY, Shawnee Heights -- A senior, Loy is a two-time All-Shawnee County selection and was a second-team All-United Kansas Conference pick as a senior after helping Shawnee Heights post a 20-14 record on the season.

Loy, who is headed to Missouri Western, registered 285 kills with a .238 hitting percentage and had a total of 35 blocks. Loy also contributed 225 digs with 31 assists and 19 service aces on 97.1-percent serve efficiency.

"She's a great player who can dominate a game when needed,'' Shawnee Heights coach Sami Kearney said. "She played all-around for us this year and was great in the back row for us as well. She is a great teammate and a great competitor.''

MAEGAN MILLS, Seaman -- A sophomore, Mills was the Shawnee County newcomer of the year and a second-team all-county pick as a freshman before earning a first-team spot this fall. Mills was a first-team All-United Kansas Conference selection, was named the offensive player of the year in the conference and earned All-Class 5A state tournament recognition.

Mills was credited with 401 kills on .264 hitting efficiency while compiling a total of 40 blocks. Mills had 148 digs and 48 service aces.

"Maegan is an absolute stud!'' Dowling said. "She can do it all: swing, pass, defense, serve, and block. She has great ball control, court awareness, and a heavy armswing. She was unstoppable this year and we love that she is a part of our team. I’m excited to coach her the next two years because her ceiling is so high! She is going to be a tremendous athlete for our program and has already proven that this season.''

KINSEY PERINE, Rossville -- A junior, Perine was a unanimous All-Mid-East League first-team selection for the third straight year and is an All-Shawnee County repeater after helping lead the Bulldawgs to a 34-6 record this season.

"Kinsey is an outstanding all-around volleyball player,'' Colwell said. "She plays with confidence and aggression in all aspects of the game. Her mentality and confidence rubs off on the rest of the team.''

Ross was a unanimous All-Mid-East League selection after helping the Eagles post a 25-12 record on the season.

“Taylor came to us four years ago as an overall great athlete with a lot of natural talent,'' Silver Lake coach Sarah Johnson said. "It has been fun to work with her over the years and to see her become a phenomenal athlete on the volleyball court. Taylor was huge for our offense and defense this year as we counted on her for every play.”

TAYLOR ROTTINGHAUS, Shawnee Heights -- Rottinghaus, who has signed a letter of intent with Washburn University, was a first-team All-United Kansas Conference selection this fall and was named the UKC defensive player of the year.

Rottinghaus recorded 376 digs as a senior while adding 75 assists and 22 service aces on 94.5-percent serve efficiency.

"Taylor is a player who never wants to let a ball drop,'' Shawnee Heights coach Sami Kearney said. "You will always see her flying all over the court to play a ball up. She is a great competitor and a great leader on the court.''

TAYLOR RUSSELL, Washburn Rural -- A senior All-Shawnee County repeat pick, Russell was an All-Class 6A State Tournament selection after helping lead Washburn Rural to a 45-1 record and the 6A state championship.

Russell had 183 kills with .317 kill efficiency on the season and also contributed 42 block kills and had a 2.3 serve reception rating. Russell served 93.5 percent with 44 aces.

"Taylor had a great season, shifting to the right side to help spread our offense out and to add needed blocking,'' Bordewick said. "She was also one of our best point scorers as a server, consistently keeping teams out of system with her float serve. She has battled different nagging injuries, but this year was able to manage them to the point she was at her best for the postseason run. A huge part of why we were so successful this season.'' 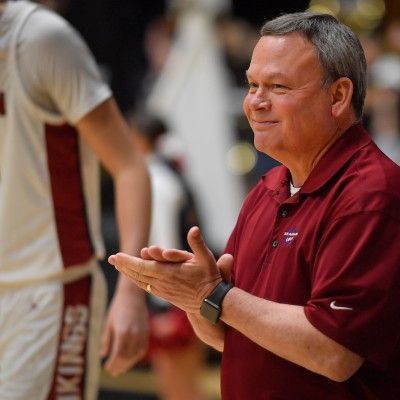