The guy that didn't know anything about volleyball when he was nudged into the sport more than three decades ago is on the verge of reaching one of Kansas' greatest milestones in Saturday's Centennial League tournament at Junction City. 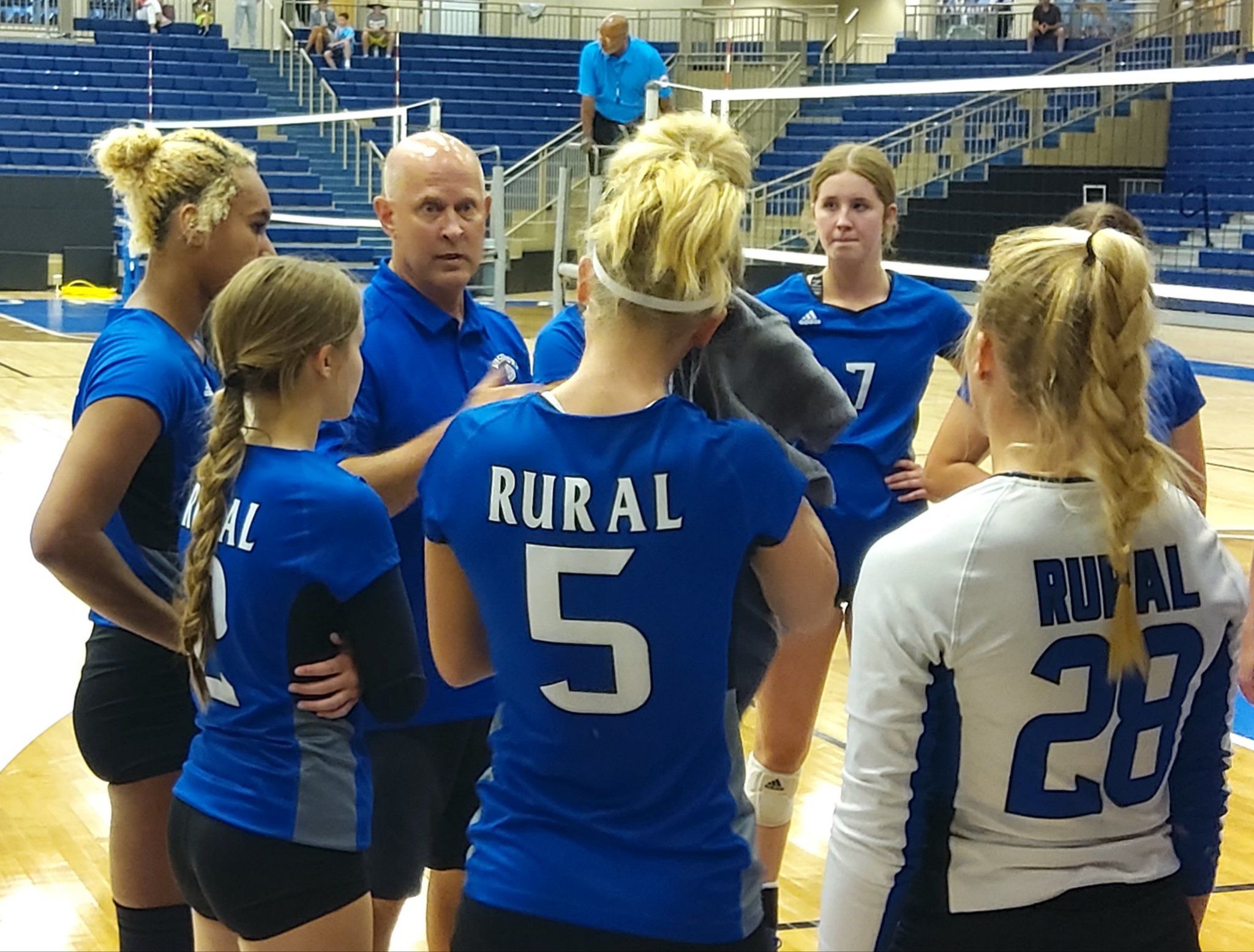 Veteran Washburn Rural volleyball coach Kevin Bordewick is one win away from reaching the 1,000th-win milestone in his career. [Photo by Rick Peterson/TSN]

Washburn Rural coaching legend Kevin Bordewick, who has led the Junior Blues to nine Class 6A state championships in two sports, will enter Saturday's six-school round-robin volleyball event with an overall career record of 999-261 and needs just one win to become just the third coach in Kansas high school volleyball history to join the 1,000 victory club.

And Bordewick, who got his start at Class 1A Randolph-Blue Valley in the late 1980s, might have never been a volleyball coach at all if it hadn't come as part of a package deal that also allowed him to fulfill his goal of becoming a head basketball coach.

"They decided to make a change with the girls position in basketball and asked me if I wanted to do that,'' Bordewick said. "I said, 'Sure,' and they said, 'Alright, it's yours, but you've got to do volleyball and you've got to be the head girls track coach as well.' ''

By his own admission, Bordewick's volleyball knowledge at that point was restricted to watching his sister play the sport.

"My sister played it in high school (at Macksville) and I know she was pretty good at it, but that's all I knew,'' Bordewick said. "I didn't know anything about it.''

Bordewick, a Kansas State graduate, went to work trying to change that and after back-to-back sub-.500 records his first two seasons, he had a breakthough year with the Rams and has never experienced another losing season.

"Two out of the three were losing seasons but the last year we won 20 matches or so,'' Bordewick said. "That first year, I'll never forget. I bet I spent three or four hours just on a practice plan because I needed to make sure that they knew I knew what I was talking about and trying to do, even though I didn't.

"I at least kind of faked my way through the knowledge part, but it's like anything, you're constantly learning.''

"I'll never forget Scott Nelson, who was the head volleyball coach at K-State, and then Frankie Albitz at KU, I called them up and they were so helpful and invited me to their camps over the summer,'' Bordewick said. "I got to be on the floor and they said, 'You want to know anyhing, you just let us know.' Their players helped at both places and I'm going, "Here's D-I college coaches helping a first-year 1A coach,' and I was like, 'How cool is that?' ''

From Randolph-Blue Valley Bordewick moved on to a two-year stint as boys basketball coach at Oskaloosa before then-Washburn Rural girls basketball coach Bill Annan, Bordewick's longtime fast-pitch softball buddy, talked him into applying for a job at Rural.

Bordewick served as the Junior Blues' volleyball assistant to Penny Lane for two seasons before taking over as Rural's head coach in 1995 when Lane became the school's athletic director.

The Junior Blues posted a 22-10 record in Bordewick's first season as head coach at the school and Rural has gone on to post a 952-221 record with 23 state tournament appearances, 20 final-four finishes and seven Class 6A state championships.

Amanda Vanderbogart, who is her eighth year as Bordewick's assistant, said "Bordy'' doesn't bring up any of his milestones, including the impending 1,000-win accomplishment.

"Never,'' Vanderbogart said. "He doesn't want anybody to know because it's all about the girls. Even with this one he's going to say it's only because of the athletes that we've had and not anything about him.''

But Vanderbogart said her time with Bordewick has convinced her that he is of the best ever.

"There's just a lot to him,'' she said. "He's honestly one of the greatest coaches and he can have fun with the girls but he also has the respect from all the girls at all levels. It's not just the high school level, he cares about them once they're in elementary school. He does stuff throughout the summer to help with the elementary kids and all the way through middle school and high school so it's not just his varsity group he cares about, it's all of the kids in the district.''

Bordewick was also Annan's top girls basketball assistant during a dominating 16-year run, which included three 6A state championships, and took over as Washburn Rural's head coach in that sport in 2009-2010 after Annan accepted an assistant coach's position at Oklahoma State. "He is so organized and prepared,'' said Annan, a Washburn Rural Hall of Famer who is now an assistant at Oral Roberts University. "Practices, scouts, I don't know if there's a more prepared coach than him. Kevin takes his teaching and his coaching very seriously and I don't think Kevin ever wants to hear anybody say that his teams weren't prepared. You win some and you lose some, but it's not from lack of preparation.

"This just didn't happen overnight. It takes a lot of time and he's still teaching upper level science. If you win that many games you've got to be competitive and Kevin's competitive, but I tell you what, the one thing about him is he's absolutely loyal to those kids that work hard. If you show up every day and you work hard for him, Kevin is very loyal to those kids, always has been, always will be.''

Bordewick gives Annan a lot of credit for helping shape his career.

"Bill was huge and I think he and I really had a great relationship,'' Bordewick said. "We just were good for each other at that point in time. When I came here I think his first year he won four and the second year we won six and then I think he and I just kind of fed off of each other.

"This was before cell phones and we're on our house phones and we'd spend hours on the phone after practice talking. I really credit him with forming a really solid philosophy on how to conduct practice, how to be organized, how to take care of all the little things.''

Bordewick said that in addition to Annan, he's also learned a lot from various other Washburn Rural coaching greats.

"(Bill) was huge and then we had Ron Bowen here and he was a (football) legend and I just looked at how his program was viewed and I thought, 'Man, that would be pretty cool,' '' Bordewick said. "We had Scott Shufelberger, who ran a great cross country program. We've had so many legendary coaches here and you just kind of look at them and go, 'I want that part of your program with us.' ''

Brooklyn DeLeye, who is headed to Kentucky next season to play volleyball, has played for Bordewick in both volleyball and basketball since her freshman year and said he is the toughest coach she's played for, but that she and her teammates appreciate the high bar that Bordewick sets for his players.

"I would say he's definitely pushed our limits,'' DeLeye said. "But if he wasn't as hard as he is we wouldn't have gone anywhere, we wouldn't be where we are today. He may be hard, but also when you do something great he'll be right there to back you up and make sure that you know that you did something good.''

Added Vanderbogart: "He's hard on them, but they also respect him more than anything because of that. They know that he loves them and cares about them more than anything, too, no matter how hard he is on them in practice and the games.''

Washburn Rural, 15-1 on the season, will get its first opportunity to give Bordewick his 1,000th career win at 9 a.m. Saturday against Junction City and DeLeye said the Junior Blues are proud to be a part of their coach's milestone.

"I think it's something special,'' DeLeye said. "Our sophomore year was his 900th and I think just being along for two of those accomplishments for him really just shows how special our group is.''

"There's no way any of this ever comes about unless you have kids who work hard, believe in each other and are great teammates and I can't say enough about the kids we've had out here,'' Bordewick said.  "They've just been outstanding.''

Bordewick ranks No. 3 on Kansas' all-time volleyball win list behind former Bishop Miege coach Gwen Pike (1,224) and former Lansing and current Pleasant Ridge coach Julie Slater (1,043) but said moving up on that list is not a priority.

"I'm not a goal-setter and I think goals kind of limit you to be honest,'' said Bordewick, who has 1,263 combined wins in volleyball and basketball.

But making sure Washburn Rural continues to be successful remains at the top of his to-do list.

"I've never ever felt comfortable with what we've done,'' Bordewick said. "No matter if it's good or bad, I'm never comfortable. There's just something in my DNA that I love to compete and I can't do it physically anymore but I can kind of manifest myself in coaching. I just want to see them compete and I want to let them know that hard work will pay off way more often than it won't.

"One of the signs we had in our weight room years ago was, 'When you start thinking you are a success, that's when you're not,' and I believe that.'' 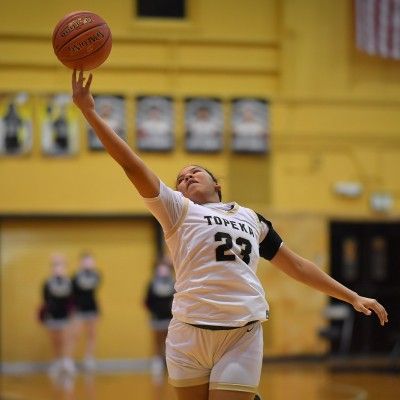