As the son of longtime Washburn University football coach Craig Schurig, Mitch Schurig has spent most of his life around the WU program, including the last five years as a quarterback for the Ichabods. 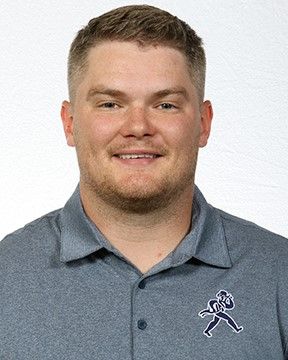 So it probably wasn't a big shock that once Mitch decided to pursue a coaching career, he ended up at Washburn.

The fact that Schurig got the opportunity to join the Ichabod staff as a full-time assistant just a year after completing his playing career was probably a little bit of a surprise, and the the fact that the former All-MIAA QB will be coaching the Ichabod defensive line may be an even bigger surprise.

But when Washburn opens fall camp on Monday Schurig will be on board and ready to go.

"You're a good coach if you've got good players, and I'm biased obviously, but I think we've got a good group of players on defense, especially at defensive line, that will make me look better than I might be,'' Schurig said with a big smile.

Schurig helped lead the Ichabods to a 9-3 record and an NCAA playoff berth last fall as a senior and passed for 6,825 yards and 63 touchdowns in his career, which are the third and second-best marks in program history. Schurig also ranks first at Washburn in career completion percentage (63.8 percent), first in passing efficiency, second in passing yards per game (220.2), second in touchdowns and second in passing completions.

Schurig spent the spring working with the Ichabod defensive backs as a graduate assistant and became the cornerbacks coach at Minnesota State earlier this summer before taking over as Washburn's D-line coach for LaRon Moore, who informed Craig Schurig last month that he is leaving the coaching field.

"I moved up (to Minnesota) late May, early June and then this happened in mid-July,'' Schurig said of the WU opening. "I worked for Minnesota State and I recruited and went to a lot of prospect camps and then I got a call and was told the Washburn job was open and to apply. I went through that process and it became official on Thursday.''

Schurig said the Minnesota State staff supported his decision to move back to Washburn.

"Talking to the staff at Minnesota State they told me, 'You'd be a fool to pass it up,' ''  Schurig said during Sunday's Washburn Media Day. "I valued their opinion a lot and I valued a lot of the coach's opinions here and felt like, 'So what if I have to move twice in a one-month span?' It is what it is. You get it done and you get it settled and then it's back to football.''

Obviously, being on the defensive side of the football is something new for Schurig, but he got a jump start on the transition during the spring as well as his short time at Minnesota State.

"I'm super fortunate to have the defensive coaching that we do with coach (Zach) Watkins, coach Brock Luke and coach Malen Luke,'' Schurig said. "They've been teaching me a lot and I've been learning a lot and I think the defensive line will learn something from me and I'll learn a lot from them.''

Schurig, who earned bachelor's and master's degrees at Washburn, said that if he ever wants to be a head coach it's important to get experience in all areas of football.

"That was part of the reason I wanted to switch sides of the ball, being that I hadn't been involved with defense since high school,'' said Schurig, a Washburn Rural product. "I wanted to learn the other side of the game and I got to work with coach Watkins in the spring with defensive backs and now it's a whole another game in the trenches, so I'm excited to learn as much as I can and also teach as much as I can.

"I'm excited to be in a different role this year with this team and I think we can do a lot of good things.''