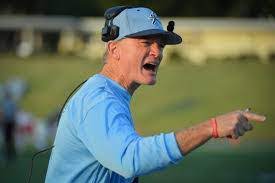 The Ichabods received 98 points in the coaches poll, two points behind No. 3 pick Pittsburg State, which received one first-place vote, and 22 points ahead of No. 5 Fort Hays State.

Washburn received 226 points and one first-place vote in the media poll, 11 points behind Pittsburg State amd 46 points ahead of Fort Hays State.

The Ichabods posted a 9-3 record and advanced to the NCAA Division II playoffs last season.

Defending MIAA champion Northwest Missouri was tabbed No. 1 in both the coaches and media preseason polls.

Washburn will open the 2022 season at Yager Stadium against Lincoln.

In the coaches poll, Northwest Missouri earned 119 total votes and the majority of first-place votes with 10 for the top spot in the poll.

Emporia State was slated No. 6 in the coaches poll while Central Missouri and Missouri Western finished in a tie for seventh. Central Oklahoma was selected ninth, Missouri Southern 10th, Northeastern State 11th and Lincoln 12th.

Nebraska Kearney was ranked second by the media with 263 points and one first-place vote.