Seaman's baseball team needed a doubleheader sweep in its regular-season finale against Hayden for the Vikings to assure themselves of a share of the Centennial League championship.

But that wasn't a topic of conversation before or during Tuesday's Senior Day twinbill at Optimist Field.

"I haven't spoken one word about league to be honest with you,'' said Seaman coach Trent Oliva after the Vikings finished off an 18-2 regular season with 10-0 and 6-5 victories over Hayden. "It's a cliche, but we take every game one game at a time.

"Like I've told these guys, they all weigh the same and they're all important and we just kind of keep rolling. We just want to go out there and compete and try to win each game.'' 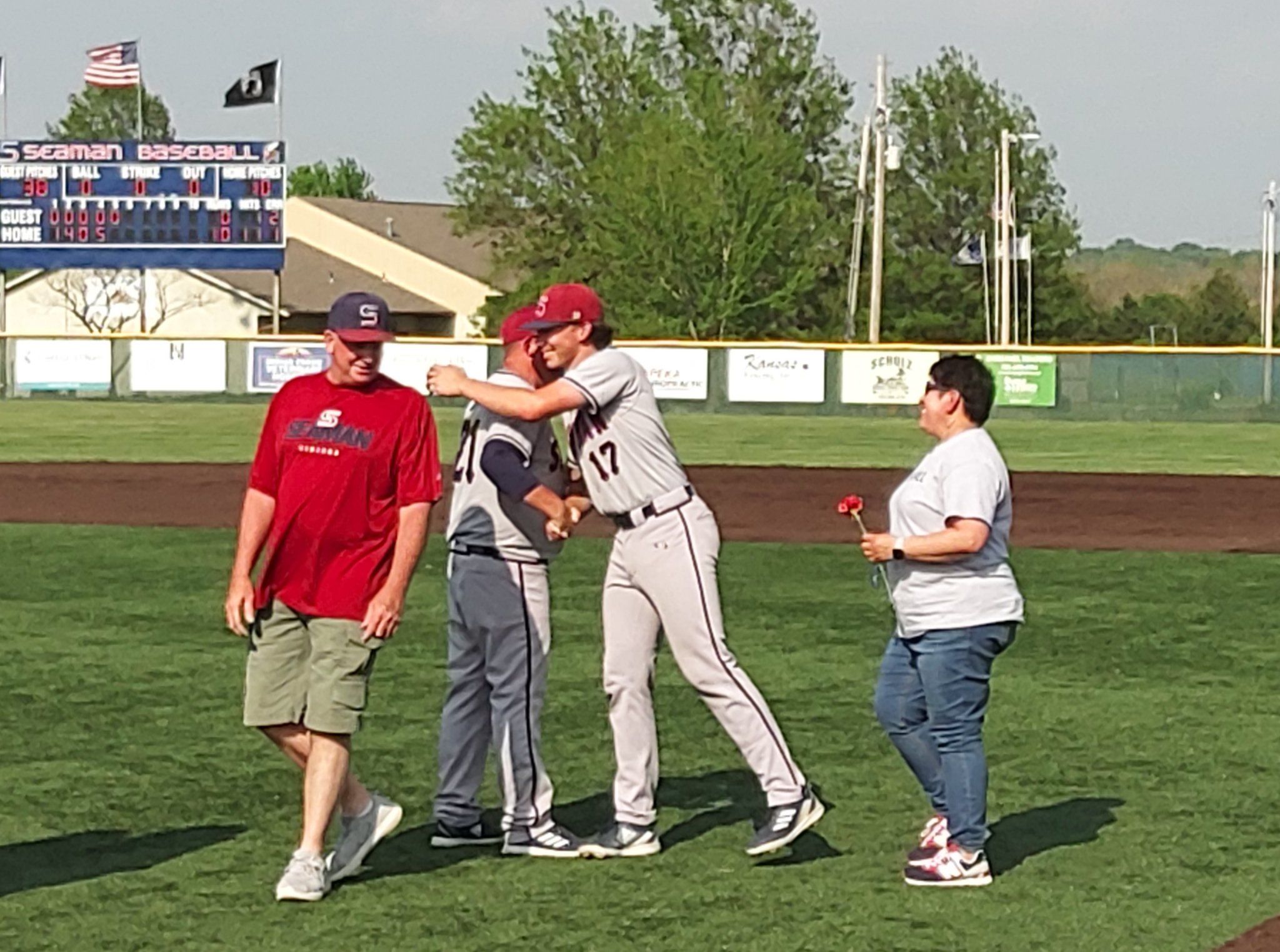 Seaman pitcher Mason McConnaughey (17) receives a hug from coach Trent Oliva during the Vikings' Senior Day festivities Tuesday. McConnaughey was the winning pitcher in the second game as Seaman earned a share of the Centennial League title with a sweep over Hayden. [Photo by Rick Peterson/TSN]

Seaman, which has won eight straight games, finished 14-2 in the league along with Washburn Rural while Manhattan can also earn a share of the title with a sweep over Junction City on Thursday.

Seaman, which will move to the United Kansas Conference next season, cruised through the first game, winning by way of the 10-run spread rule in four and a half innings.

Viking pitchers Bryson Vawter and Ben Laird combined for a 1-hit shutout while senior Dagen Brewer put Seaman ahead to stay with a first-inning solo homer and Vawter gave the Vikings their 10-run spread with a three-run home run in a five-run fifth.

The second game, meanwhile, went down to the wire after Hayden (8-12) jumped out to a 2-0 lead against Seaman starter Maclane Finley in the top of the first, getting a two-run double from freshman Cooper Grace, who got the Game 2 start on the mound.

Seaman answered with a three-spot in the bottom of the second to take a 3-2 lead but Hayden tied the game when junior Dylan Foster walked and scored on a Grace sacrifice fly.

The Vikings broke the tie with a run in the fifth and two in the sixth but Hayden scored twice in the top of the seventh to get within a run before senior pitcher Mason McConnaughey, who picked up the win in relief, got a big double play from his defense and ended the game with a strikeout.

McConnaughey came on in relief in the fourth and gave up four hits (three in the seventh) while striking out six.

Pitching on the hottest day of the spring, McConnaughey admitted he was getting a little winded in the late going, but was happy he was able to finish out the game.

"Towards the seventh inning my command started to wither away but luckily we got the good double play right to Maclane at second,'' McConnaughey said. "That helped us out a lot and also credit to our batters for getting the two-spot in the bottom of the sixth. It ended up showing that that mattered.''

Oliva said being able to pull out the second-game win was big for his team.

"That was actually our postgame message, that these games are the games we're going to have to win going down the stretch in the future if we want to go do something special,'' Oliva said. 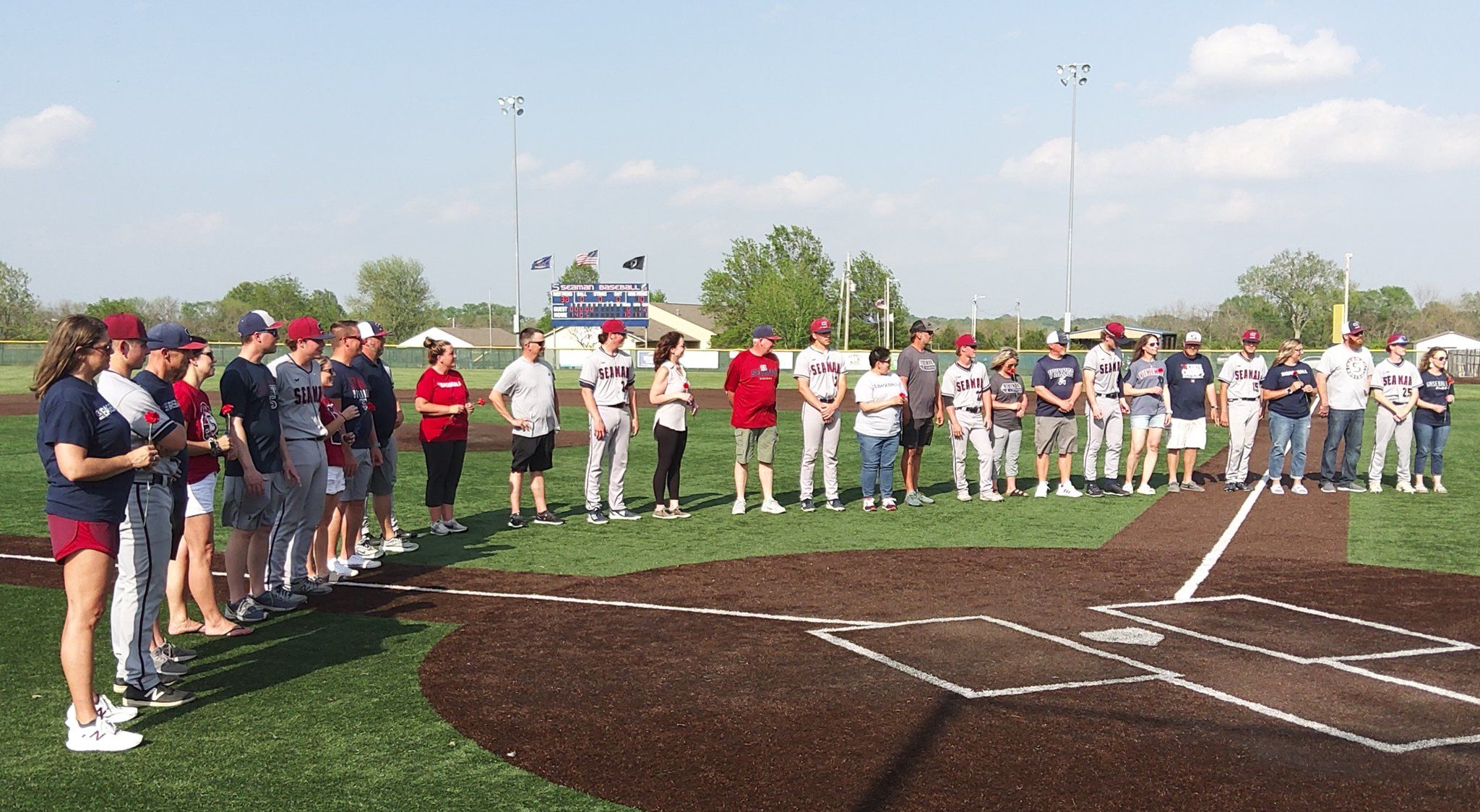 Seaman's nine seniors gather with their parents during Tuesday's Senior Day festivities between games of a Centennial League twinbill against Hayden. [Photo by Rick Peterson/TSN]

Seaman has clinched the No. 1 West seed for the Class 5A playoffs and will be at home next Tuesday for regionals. Official pairings will be released on Saturday.