Former Shawnee Heights star point guard Trey Brown, who helped lead the T-Birds to the Class 5A state championship in 2017, had his heart set on becoming a basketball coach.

But even Brown is surprised that things have happened this quickly, with Cair Paravel Latin announcing the 23-year-old Brown as the Lions' new head boys coach Wednesday night.

"It was actually pretty crazy,'' said Brown, who recently wrapped up his college career at MidAmerica Nazarene University. "Coaching is something I always really wanted to do and I was looking around and really didn't have any plans of being a head coach right away, but I saw the (Cair Paravel) opening on a website. It was where my mom (Kim) had gotten her first coaching job and I saw it and it was kind of a shot in the dark, but I thought I might as well try.

"I ended up meeting with Gary (Cleverdon, CPLS athletic director) and had a good meeting with him and then he offered me the job. Honestly it's just been a blessing. It's something I never expected to happen, and shocked me as well, but I'm happy it did. It's been pretty wild.''

Brown, who averaged 13.4 points as a senior and surpassed more than 1,000 career points for MidAmerica Nazarene, said landing the Cair Paravel job is a dream come true.

"As bad as a lot of people want to play a college sport, I've kind of had the same passion about being a head coach,'' Brown said. "It's something that I've always dreamed about. Since I was about 10 years old I always wanted to be a head coach and I was always drawing up plays and stuff like that, messing around in my free time. It's something that's always interested me and I've been able to learn from some of the best coaches in the game of basketball.

"Coach (Rocky) Lamar has been a huge role model for me and and we've had two great assistants at MNU, Nate Launius and this year, Adam Hepker, and they've been a huge inspiration for me and really made me realize that this is definitely something that I wanted to do. Hopefully one day I can be half the coach that those guys are.''

Brown, who will graduate from MNU with a degree in criminal justice next month, takes over a Cair Paravel Latin program that is coming off a 14-5 season.

Brown takes over for Mike Malloy, who along with assistant Steven Hastert, retired at the end of the season. 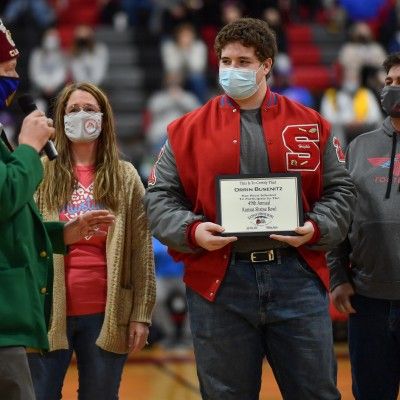