Washburn men’s basketball faced off with Emporia State for the 215th time in program history on Saturday in a game that made every 10th of a second count.

After scoring eight points in the first 39 minutes, 59 seconds of the game, junior Jalen Lewis came through for the Ichabods with a buzzer-beating 3-pointer to give the Ichabods a 68-65 MIAA victory at Lee Arena.

“(I) just trust in the work that I put in, and trust that my teammates are going to find me,” Lewis said. “Just to see their reaction, we try to play hard for the fans and all the city of Topeka so to do that at home against a rival is huge.” 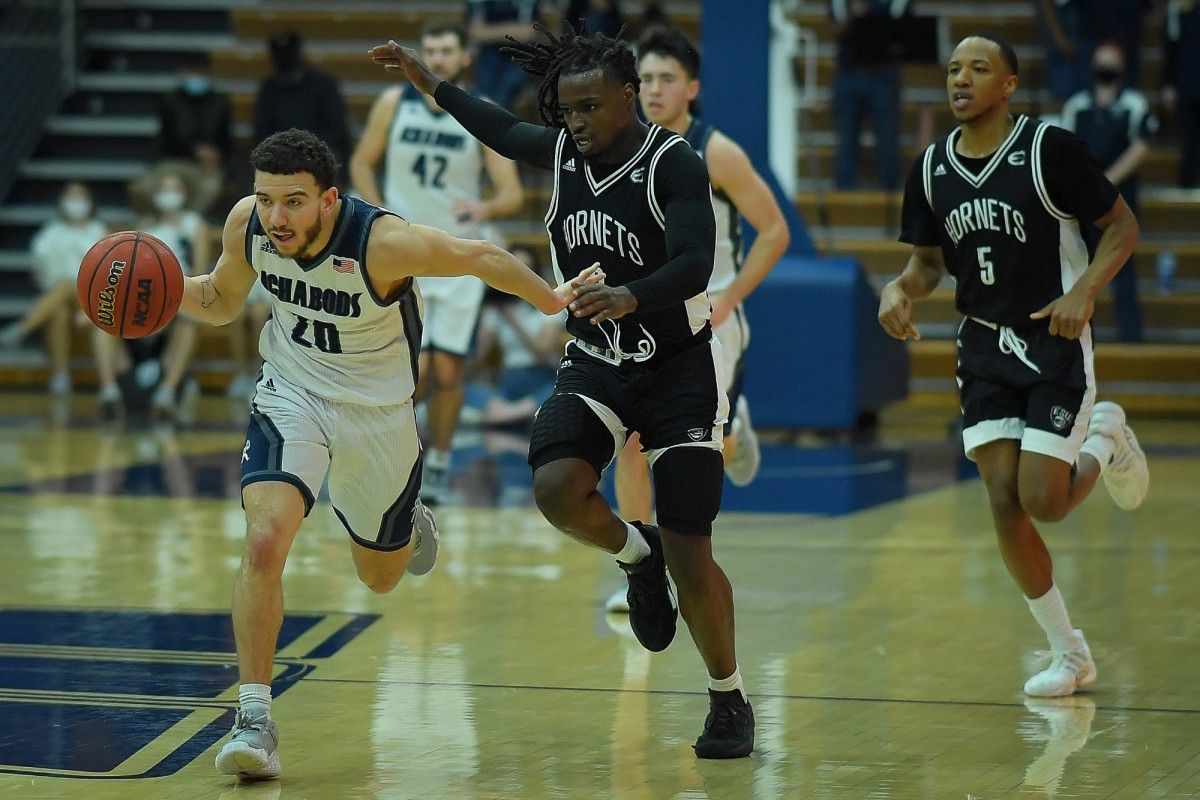 Jalen Lewis (20) hit a game-winning 3-pointer at the buzzer to give Washburn a 68-65 MIAA win over rival Emporia State Saturday at Lee Arena. [Photo by Rex Wolf/TSN]

The rivalry win gave Washburn five wins in its last six games and moved the Ichabods to 11-7 on the year and 8-4 in conference play.

“I think we have grown. We went through a lot of adversity earlier, and this last month these guys have been terrific,” said Washburn coach Brett Ballard. “They got a really good team, so it was a good win for us, a rivalry win, so those are always a little bit sweeter.”

The beginning of the game was evenly matched, with the two teams trading the lead five times in the first seven minutes. The Ichabods were sharp from outside early on, hitting four of seven 3-pointers in the first 10 minutes, including back-to-back treys from senior Tyler Geiman.

Inside of nine minutes Washburn’s defense tightened, allowing only two points from 9:24 to 4:23. In that time the lead grew to double-digits after a third 3-pointer from Geiman.

“I thought our defense was as good as it has been all year, we were really locked in, challenged everything and competed. They got a really tough offensive team, they are tough to guard and I thought our guys were just relentless with our effort,” Ballard said.

The lead remained at or above 10 and grew to as many as 12 after two free throws by sophomore guard Connor Deffebaugh who had seven first half points. Just before the halftime buzzer Emporia State cut the lead to single-digits after senior Jumah’Ri Turner hit a 3-pointer for three of his 16 first-half points to make it a 35-28 game at the break.

“Defensively we definitely locked in … having to guard two really good players especially offensively, two guys who can go out and score 20 each night, we knew that would be big challenge but we came and locked in defensively,” Lewis said of Washburn holding Emporia State to 32-percent shooting in the first half and 35 percent in the game.

The first-half lead slowly went away as the Ichabods started the second half scoring only four points in the first six minutes of the half.

The Hornets would come all the way back to tie the game after a 3-pointer by senior Brendan Van Dyke with 12:52 to go.

Inside of 10 minutes Washburn had some success going inside to junior Jonny Clausing who scored two baskets over a two-minute stretch and went to the line twice. The lead was erased just as quickly after seven straight points from Turner, part of his game-high 29, gave the Hornets the lead.

Just like the first half, the Ichabods quickly battled back to retake the lead as the game moved into the final five minutes, which featured tough shot-making on both sides.

Just in the last five minutes the lead changed hands eight times. For Washburn, freshman Michael Keegan knocked down a 3-pointer and converted an up and under layup that retook the lead each time.

Under two minutes it was Geiman who took over for the Ichabods, hitting a jump shot to give them a 64-63 lead. After a stop on the next possession Geiman ran the clock down before getting fouled, knocking down one to make it a two-point game with 26 seconds left.

Emporia State capitalized with senior Tray Buchanan able to get inside and score a layup to tie the game with 13 seconds left.

With no timeouts available Geiman brough the ball down into the lane before getting stuck and kicking it out to Lewis who took one dribble left and released the ball with .01 left on the clock and sunk the shot and the Hornets and gave Washburn the 68-65 victory.

“I trust our guys and you know Geiman was trying to make a play and the kid played good defense on him and luckially last second was kind of forced to kick it out and he found his guy, and those two guys have made some big plays over the course of their time here so its great to see J-Lew make that shot,” Ballard said.

Geiman led the way scoring with 18 points to go along with eight assists and nine rebounds. Clausing and Keegan were in double figures with 12 and 10, respectively, while Lewis had 11 including the biggest shot of the night.

Washburn will stay at home next week when they welcome Newman University to Lee Arena Jan. 26.

Hi-lights from the Hays Indians vs the Seaman Vikings