SEARCY, Ark. -- Ball control for Harding and a slow start for Washburn were the keys to Saturday's NCAA Division II first-round playoff game, with the Bisons opening up a 27-7 lead early in the second half on the way to a 30-14 victory at First Security Stadium.

Harding, which improved to 11-1 with its 10th straight victory, ran 93 offensive plays to 36 by Washburn and had the ball for 47 minutes, 24 seconds, compared to 12:09 possession time for the Ichabods, who fnished the season 9-3.

"I'm just proud of our team,'' Washburn coach Craig Schurig said. "It's a great challenge to make it to the NCAA playoffs and we did it. We're obviously disappointed, but hats off to Harding. They played a great game and took control of the game and we couldn't quite get back in it.''

Harding dominated the first half, outgaining Washburn by a 279-34 margin in total yards and running 46 plays to just 16 for the Ichabods en route to a 20-7 advantage at the break.

"It was definitely frustrating, but we knew coming into the game they were going to have the ball a lot with their style of play,'' Washburn standout James Letcher Jr. said. "We just had to try to capitalize whenever we got the ball and we didn't do what we wanted to do today but you best believe we'll be back.'' The first-half highlight for Washburn was a 97-yard kickoff return from Letcher (Trenton Brehm kick), but the Ichabods struggled mightily on offense, gaining just 3 yards on six rushing attempts in the opening half and going 4 of 10 passing for 31 yards.

Harding set the tone for the half on its opening possession of the game, going 79 yards in 12 plays for a 1-yard touchdown by senior quarterback Preston Paden with 6:41 left in the opening quarter (Grant Ennis kick).

"I think that first drive, it's hard to get the speed of the game with the work team and that first drive that dive hits real fast and we coudn't quite slow it down,'' Schurig said. "Then I thought our defense kind of got their legs under them and started slowing it down some.

"Offensively we had real trouble getting on track and they did a nice job defensively, and our third-down conversions we weren't short, we were third and long a lot and that kind of hurt us.''

After forcing two straight Washburn punts, the Bisons put together another long drive, pushing their lead to 10-0 on a 29-yard Ennis field goal with 8:58 left in the first half.

Washburn got back in the game on Letcher's return, but Harding, which rarely passes the ball, caught the Ichabods off guard for a 54-yard touchdown pass from Paden to sophomore Roland Wallace on its ensuing possession (Ennis kick) to give the Bisons a 17-7 lead with 5:00 left in the half.

After forcing Washburn's fourth punt of the first half, Harding added a 45-yard Ennis field goal on the final play of the half to put the Bisons in front, 20-7.

The Bisons then made it a three-score game on their first drive of the second half, moving 74 yards in 15 plays and holding the ball for 8:13 before Harding star running back Cole Chancey scored on a 12-yard run with 6:39 left in the third quarter.

After the Ichabods' defense came up with a big stop, Washburn finally got its offense untracked, with Mitch Schurig completing a 30-yard pass to Jace Williams and a 34-yard pass to Peter Afful before hitting Letcher for a 15-yard touchdown with 12:37 remaining.

The Ichabods then pulled off what appeared to be a successful onside kick, but Washburn was penalized for being offsides on the play and forced to kick again.

Harding then responded with yet another lengthy possession, taking a 30-14 lead lead with 7:13 remaining on a 32-yard Ennis field goal with 7:11 remaining.

Washburn threatened again on its next two drives, but Harding came up with a pair of 4th-down stops deep in Bison territory.

"I was proud of our team fighting in the fourth quarter, we had a little spark there and maybe a couple of more plays and we make it a close game, but it was tough,'' Craig Schurig said.

Harding, the nation's rushing leader, picked up 419 yards on 90 carries, with Chancey carrying the ball a whopping 41 times for 176 yards.

Schurig completed 12 of 28 passes for 214 yards, but the Ichabods were unable to get anything going on the ground, with eight attemputs for minus-2 yards. 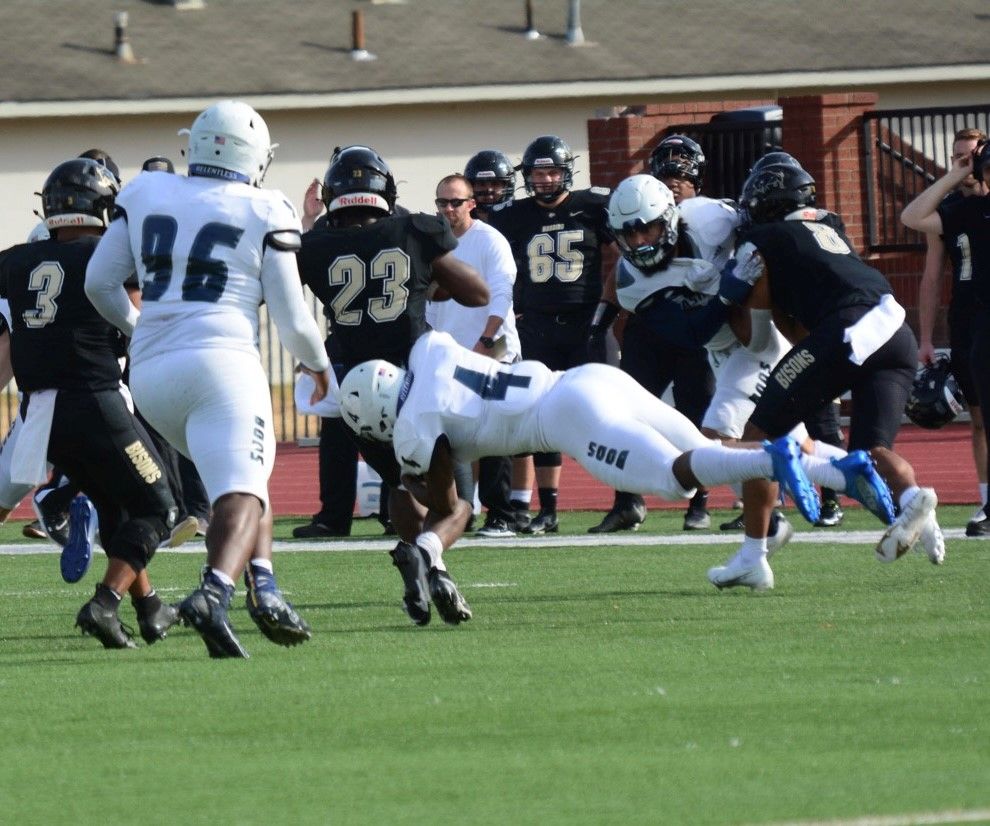 Washburn defensive back Kevin Neal Jr. leaves his feet to make a tackle Saturday at Harding. [Photo by Phil Anderson/Special to TSN]

Kevin Neal Jr. had a game-high 16 tackles for Washburn while Grant Bruner had 15 stops and Brooks Peavler 12.

"It's a tough offense to go against,'' Neal said. "We usually don't see that type of offense throughout the year. They do a great job of executing, hats off to them.''

Harding will host Northwest Missouri next Saturday in a regional semifinal.