Wrestling background still a benefit for Ichabod standout back Peters

There was a time that former Salina Central football and wrestling standout Taylon Peters thought his future woud be on the mat.

After all, Peters was a three-time Class 5A state wrestling medalist and a two-state runner-up, but both Peters and the Washburn Ichabods are happy the 5-foot-10, 200-pound sophomore running back chose the gridiron instead.

"Early on in high school I always thought I was going to be a wrestler,'' Peters said. "But my freshman year I had to cut 27 pounds and that kind of ruined it for me in a sense. I still loved to wrestle, but I knew if I went to college to wrestle I was just going to have to cut weight and I was going to be miserable. I was having a lot of fun playing football anyway so I just decided to go that way.'' 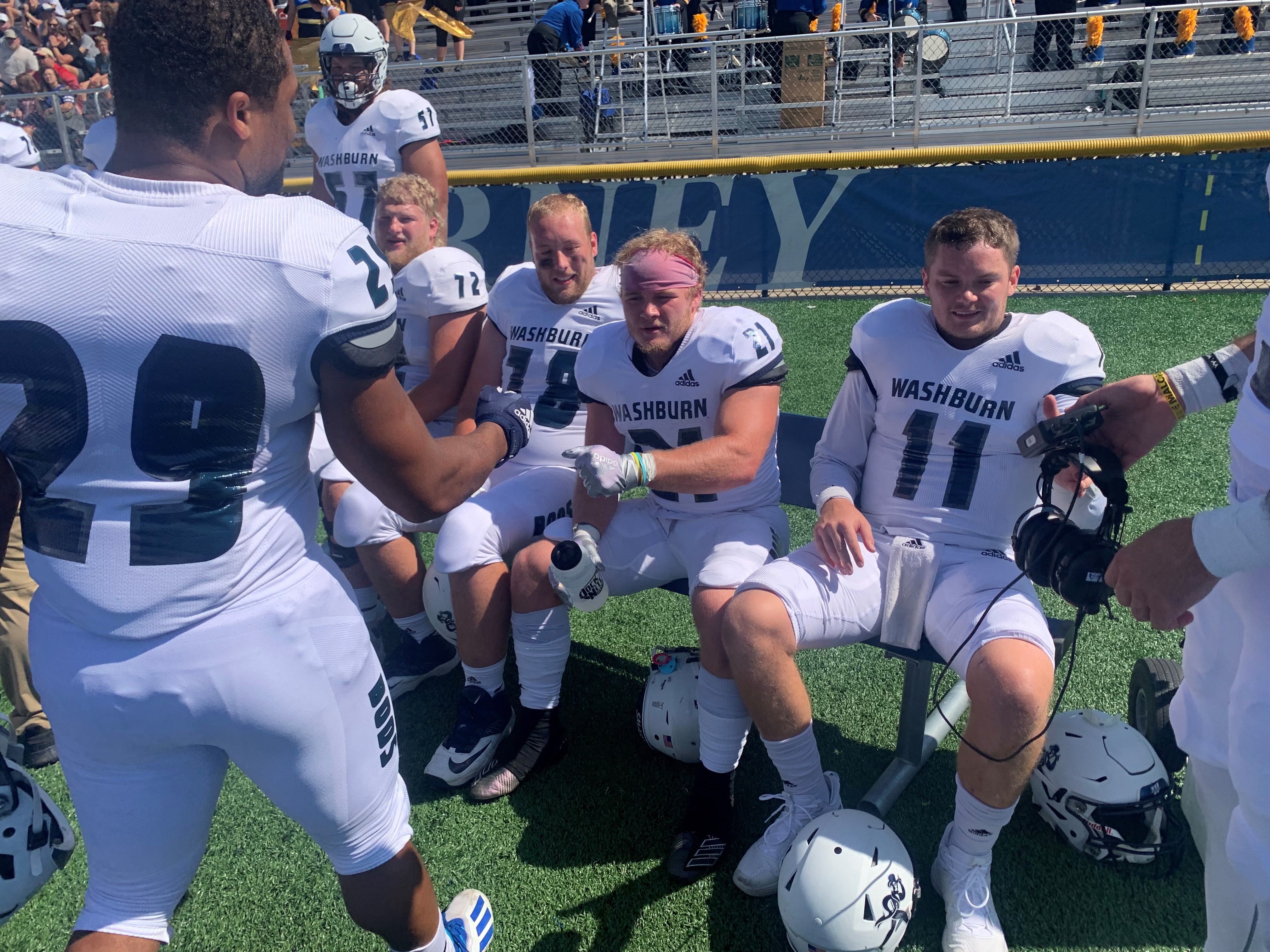 Washburn running back Taylon Peters (21) is congratulated by teammates after scoring a touchdown earlier this season. Peters is the Ichabods' leading rusher with 703 yards on 134 attempts. [Photo by Phil Anderson/Special to TSN]

And Peters, who received All-MIAA honorable mention earlier this week, has no doubt that his wrestling background is still paying dividends for him.

"Most definitely,'' Peters said. "It helps in every aspect of football, really -- balance, knowing how much your body can take, just recovering after a play, getting yourself under control, breathing. It all helps.''

Peters, who rushed for 1,719 yards and 20 touchdown as a senior at Central, earned playing time right off the bat as a true freshman for Washburn in 2019, rushing for 98 yards and two TDs in his college debut against Lincoln.

Peters went on to gain 544 yards and score seven touchdowns on 121 attempts as a freshman and has stepped up his game even more for the 9-2 playoff-bound Ichabods this fall after the 2020 season was canceled due to COVID-19.

"My coach my freshman year, Bryce Chavis, always told me to have confidence in myself and that he believed in me and supported me and told me I was a good back and I just needed to focus and keep becoming the best version of myself that I could be,'' Peters said.

Peters, who is coming off a career-high 123-yard performance in last Saturday's 38-28 win over Missouri Southern, is Washburn's leading rusher with 703 yards and four touchdowns on 134 attemps heading into Saturday's 1 p.m. NCAA Division II playoff game at Harding while teaming with senior Zach Willis to give the Ichabods a strong one-two punch.

As a tandem Peters and Willis have rushed for 1,276 yards and a combined 11 TDs while averaging right at 5 yards a carry.

"I've really enjoyed playing with Zach and me and him have a great relationship,'' Peters said. "He's a heck of a back and we have different styles but we both deliver a big punch. It's a lot of fun being that close with somebody and running the ball together.

With two seasons remaining, the goal for Peters now is to continue to improve.

"That's my goal every season I have, to just keep getting better,'' he said. "You can't become stagnant or you're just going to keep producing the same things, so I really try to get better every game and keep improving.''