On Sunday the Ichabods will find off if it was enough.

Washburn will learn its postseason fate with the NCAA selection show scheduled for 4 p.m. at ncaa.com. Only the top seven teams in the final regional rankings will advance to the playoffs and the Ichabods are among a group of 9-2 bubble teams. The Ichabods were No. 9 in the most recent regional rankings.

Washburn would also be in line for a possible bowl game berth and coach Craig Schurig said it would be unfortunate if the Ichabods don't get the chance to play another week.

"Hopefully we play on and I would be real disappointed if we don't get another game with these guys because they're just a great group,'' Schurig said. "They handle practice right, everything they do is right and it's nice to have a reward, so hopefully we do.

"Hopefully we have another set of practices and we're preparing to play a game.''

Missouri Southern (3-8) jumped out in front 7-0 on a 31-yard touchdown pass with 10:20 left in the first quarter, but the Ichabods responded with 38 straight points to take a 38-7 lead with 9:38 in the third quarter. Southern scored 21 straight points to end the game, but the Lions were never able to get any closer than the final margin.

Senior Zach Willis got the Ichabods on the board with a 2-yard run at the 5:38 mark of the first quarter and Washburn took the lead for good at 10-7 when freshm Trenton Brehm hit a 34-yard field goal.

Washburn pushed the lead to 17-7 when senior Mitch Schurig hit junior Peter Afful for a 60-yard touchdown strike with 11:28 to go in the first half and Schurig connected with senior Jace Williams with 33 seconds to play in the half on an 11-yard TD pass as Washburn took a 24-7 lead into the break.

Washburn had the opening possession of the second half and Schurig scored his second career rushing touchdown with a 1-yard sneak as the Ichabods went up 31-7.

"We stalled on our first possession, had it inside the 50 and we need to put up points, but then we got rolling with 38 unanswered and we played complimentary football,'' Mitch Schurig said. "You don't do that without the defense getting stops and special teams helping out with field position, so that's always fun.''

Washburn senior offensive lineman Colton Dunkle is congratulated after scoring the first touchdown of his career in Saturday's 38-28 win over Missouri Southern. [Photo by Phil Anderson/Special to TSN]

"We practiced it twice on Thursday,'' Dunkle said of his scoring play. "I've been lobbying for it for about six weeks now.

"I actually made a bet with my mom that I would score this season so I won that and now she has to buy me an iron set.''

Sophomore Taylon Peters had 123 rushing yards on just 11 attempts (11.2 yards per carry) and Willis finished with 74 yards on 20 carries.Schurig was 20 of 27 passing for 225 yards and two scores. James Letcher, jr. had eight catches for 73 yards.Defensively, the Ichabods were led by Peyton Lane with 10 tackles (eight solo) while Christian Clark and Grant Bruner both were in on six stops. Chase Ast had two sacks. 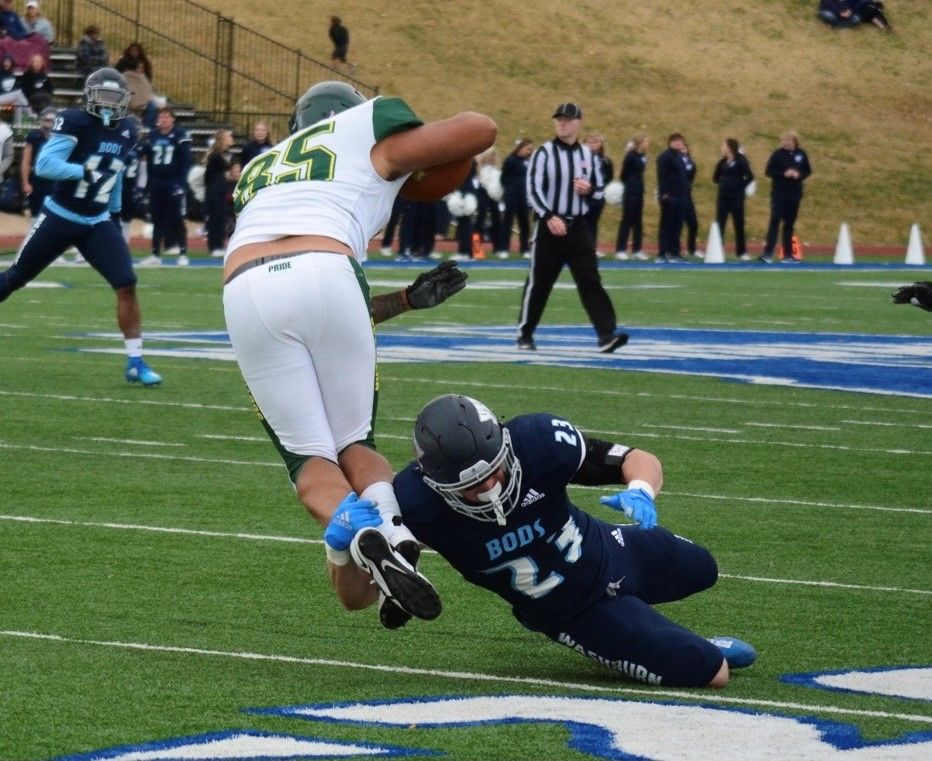 Washburn outgained the Lions 472 to 371 and recorded 247 yards on the ground.The nine wins for the Ichabods is the most since recording 11 during the 2011 season when the Ichabods reached the NCAA Playoffs in their last appearance in the NCAA Tournament.