Kennedy and McWilliams were both All-Shawnee County and All-Class 6A picks last season after helping lead the Junior Blues to a third-place finish in the Class 6A state tournament.

Shandon Carr, Lenexa, 5-6, Defender -- The St. Thomas Aquinas senior has lettered three times in high school heading into her senior season … she played at Olathe North High School her freshman year where she earned newcomer of the year … after a canceled sophomore year, Carr helped the Saint Thomas Aquinas win the 5A State Title her junior year … with the KC Fusion Club team, she won the NPL League in 2020 … daughter of Sheleah and John McPherson … has two sisters, Jaylyn and Jamya, and a brother, Jahron.  Brother Jahron plays football at K-State … plans to major in pre-dental.

Hunter McWilliams, Topeka, 5-7, Midfielder -- McWilliams has been a three-year letter-winner for Washburn Rural ... earned first-team All-City and first-team All-State while leading the Junior Blues to a Centennial League championship and state runner-up finish her freshman year … sophomore season canceled due to COVID-19 … she earned First Team All-City and All-State again while ranking second in assists and third in goals during her junior year … her team was once again were Centennial League Champions … daughter of Heather and Scott McWilliams … two sisters, Harley and Hayden McWilliams … plans to major in nursing

Lakin Rold, Lee's Summit, Mo., 5-5, Defender -- In her senior season at Lee's Summit West High School … played soccer throughout high school … she was a two-time all-conference honorable mention and earned first-eam all-district her junior year … in her two seasons, the Titans were first in the conference and district both times and were third and fourth in the state … daughter of Tami and Ben Rold … plans to major in nursing

Haley Rogers, Maize, Forward -- Currently a senior at Maize High School and has lettered in soccer three seasons heading into senior year … also played volleyball in 2020 when the soccer season was canceled due to COVID-19 … in her junior year she earned first-team all-league and second-team all-city and all-state … she finished with 16 goals and six assists, leading the Eagles to a 15-0-1 record … daughter of Jessica Rogers … her mother, Jessica, played softball at Newman University … one sister, Ryley Rogers … plans to major in biology or health science.

Brooke Powell, Spring Hill, 5-6, Defender -- In her senior season at Spring Hill High School and lettered in soccer her first three seasons … helped the Broncos win the Northeast 5A Regional championship her freshman year … her sophomore year was canceled due to COVID-19 … earned first-team All-Frontier League and second-team All-State in 5A while winning the Northeast 5A Regional again her junior season … she also lettered in basketball for three years … daughter of Krys and Keenan Powell … two brothers, KJ and Cody Powell … KJ played men's soccer at Baker University for one year … plans to major in biology or environmental sciences or kinesiology.

Belle Kennedy, Auburn, 5-3, Midfielder -- Currently in her senior year at Washburn Rural High School and lettered in soccer throughout high school…  she helped the Junior Blues to a state runner-up finish her freshman year … her sophomore campaign was canceled due to COVID-19 … in her junior year, she earned 6A midfielder of the year and first team All-State … daughter of Ashley Kennedy-Cooney and David Cooney … has one brother, Bradley Cooney … plans to major in biology or medicine. 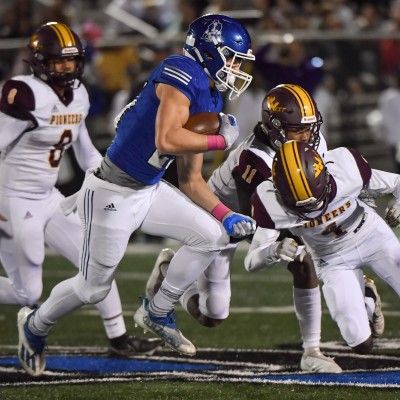