No. 3-ranked Ichabod volleyball improves to 24-3 with MIAA wins

The No. 3 -ranked Washburn University volleyball team finished with a .486 attacking percentage and landed 10 service aces as the Ichabods cruised to a three set win at Missouri Southern on Saturday evening. Washburn won by the set scores of 25-8, 25-8, and 25-10 for its 17th sweep victory of the season. The Ichabods now hold an overall record of 24-3 and are tied with Central Missouri for first in the MIAA standings with a conference mark of 16-2. 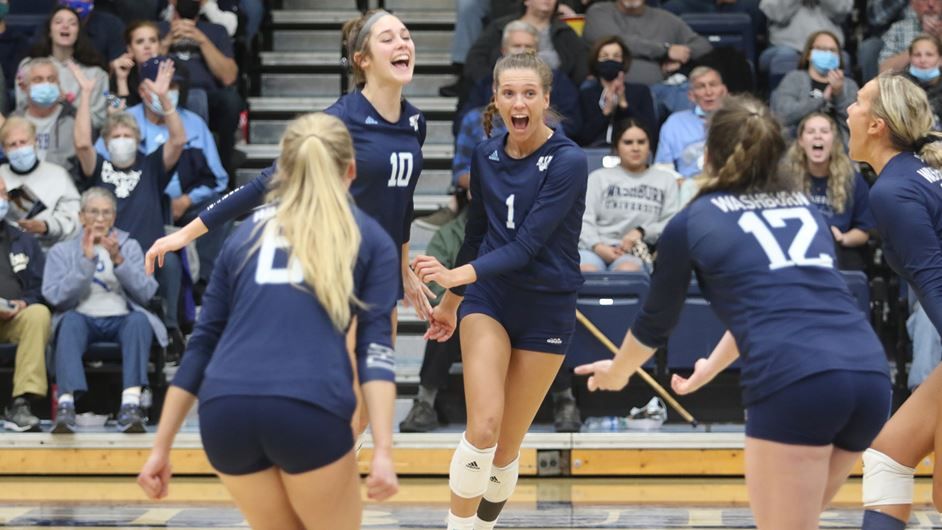 The Ichabods got going right away in Saturday's match against Southern as they jumped out to an 8-1 advantage with three service aces during that run. An 11-1 scoring burst pushed Washburn's lead to 19-4 and the Ichabods went on to claim six of the final eight points to win the first set. Washburn rattled off the first five points in the second set and put together a 10-1 run midway through the set to go up, 21-7. Allison Maxwell knocked down a kill to close out the 25-8 second-set victory. Missouri Southern (4-24, 1-17 MIAA) held its first lead of the match at 2-1 in the third after back-to-back kills. The Lions' lead was short-lived, though, as Genna Berg recorded a kill to start a 5-1 run to put Washburn back in front, 6-3. Washburn continued to add to its lead and capped off the sweep with kills from Kelsey Gorgon and Berg. The Ichabods recorded their second-highest hitting percentage of the season with .486 clip while the Lions hit .025. Washburn dominated offensively and led in kills, 41-16, and in aces, 10-2. The visiting Ichabods also led defensively in digs, 40-18, and in blocks, 4-3. It was a balanced attack for Washburn as four Ichabods finished with seven or more kills and hit above .400. Berg hammered down a team-best nine kills on 11 swings with zero errors for a scorching .818 hitting percentage. Maxwell hit .583 and Gordon had a .538 attacking percentage as both contributed eight kills with just one error apiece. Jalyn Stevenson recorded seven kills and 10 digs.

Three Ichabods finished in double-digit kills on Friday as WU defeated Pittsburg State. The match started with back-and-forth scoring and the Ichabods held a 9-7 advantage when their errors began to pile up and the Gorillas (13-12, 7-10 MIAA) took the lead with a 10-2 run.

Down 23-13, Washburn came alive and clawed its way back into the set by scoring nine out of the next 10 points and spoiled five game points for the Gorillas. The rally came up short, however, as Pittsburg State won 25-22 on a Washburn service error. The Ichabods rebounded in the second set and got out to a 6-2 lead. Washburn led 10-8 when a kill from Gordon started an 8-2 run to push its lead to 17-10. The Ichabods closed out the 25-12 victory with six consecutive points and hit .524 in the frame. Washburn continued its attack in the third set as it landed 19 kills and recorded a .485 hitting percentage. The Ichabods trailed 5-4 when they used a 5-1 run to take the lead. The Gorillas fought back and pulled within one point at 10-9 when a kill by Berg sparked an 8-2 spurt to create some space. Maxwell capped off a 5-0 run as she swatted down a kill to give the Ichabods a 2-1 advantage in the match with a 25-14 set win. Both teams jockeyed for the lead with scoring runs in the fourth set as there were six lead changes and nine ties. The Gorillas led 12-9 when the Ichabods went on a 6-1 run and benefited from three errors committed by Pittsburg State to move in front, 15-13. PSU reclaimed leads at 16-15 and 17-16 before dropping two points in a row and then evened the game at 18-all, but that was as close as it got. Washburn broke the 18-18 tie and won seven of the last nine points to close out the 25-20 triumph. Washburn finished the night with a .331 attacking percentage while Pittsburg State hit .137. The Ichabods led in kills, 61-43, and in digs, 56-47. Maxwell hit a sizzling .600 in the match and led the Ichabods with 14 kills on 20 attempts with just two errors. She also made five blocks, including one solo stop. Berg landed 13 kills and Gordon contributed 11 kills and hit .500. Sadler was one dig shy of a double-double as she finished with 49 assists and nine digs to go with four kills on five attempts. Rottinghaus recorded 19 digs and ChloePaschal had four of Washburn's six service aces. Janae Thurston had a team-high 14 kills for the Gorillas. Washburn wraps up the regular season this week at Lee Arena, hosting Missouri Western on Friday before taking on No. 5 Northwest Missouri on Saturday for Senior Day.