One play may not have beaten Washburn Rural in Friday's Class 6A state playoff game against Free State, but it certainly put the Junior Blues in a hole they never recovered from in a 42-10 loss at Bowen-Glaze Stadium.

Down 14-7 early in the second quarter, Rural's defense came up with its first stop of the night, pinning the Firebirds at their 16-yard-line and forcing a punt.

But that punt, as bad as it was, proved to be the play of the night, turning what would given the Junior Blues a golden opportunity to tie the game into a 21-7 deficit.

Free State's punt didn't make it past the line of scrimmage and by rule that allowed Free State senior Brian Lane to scoop up the ball and ramble 85 yards for a touchdown, helping the Firebirds open up a 14-point lead with 11:02 remaining in the half on the way to Friday's decisive win. 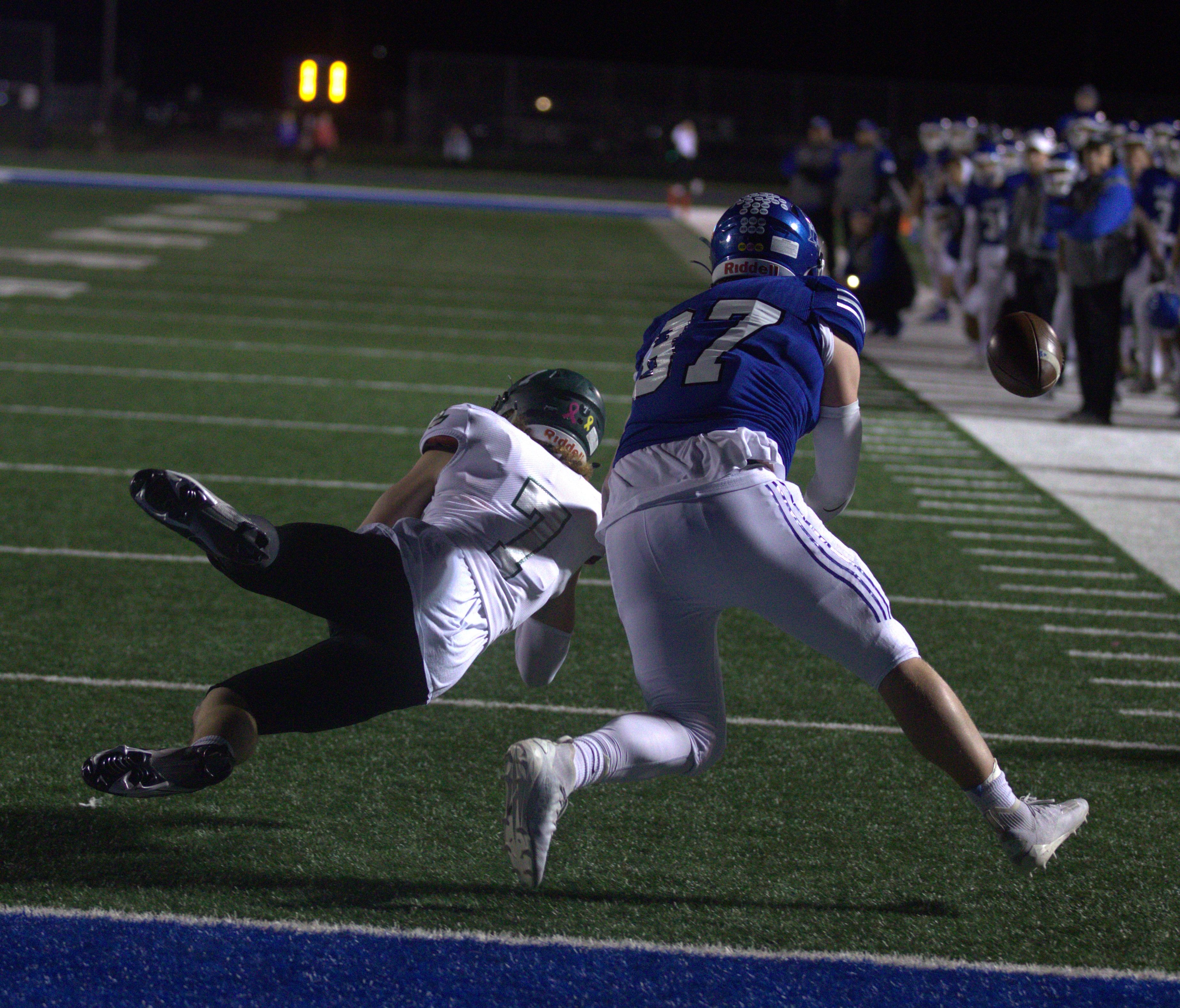 Lane said he didn't initially realize he could advance the ball.

""I actually did not,'' he said. "I picked the ball up because it started to roll backwards. I just heard coach saying, 'Run! run!' So I just started running."

It was the first touchdown of his career.

"I'll remember that forever -- through college, through my whole life,'' Lane said.

"I just noticed the ball didn't ever cross the line,'' Stewart said. "Behind the line of scrimmage, you can advance it. I was just yelling at (Lane), 'Run it, run it, run it! He didn't really know what I was talking about it, but thankfully he listened. Thankfully the officially didn't blow the play dead, they just let it go.

"I've only seen that play twice in football. One time it was a Chiefs-Chargers game. I was a fan and I'm watching the game and I'm just going nuts. Then one other time in high school football. I felt really bad for Washburn Rural on that play. I really do, because that's a tough break. Unlucky. Just total luck on our part. Terrible play by us turned into luck. But that's just part of the game. Sometimes it happens like that."

The play had Washburn Rural coach Steve Buhler and his staff trying to figure out exactly what transpired.

"You're trying to figure out what happened,'' Buhler said. "From the sideline you're sure the punt went past the line of scrimmage and to be honest with you I'd still have to go look that rule up because I've never seen it, as long as I've been around.

"We had to look at it on the sideline just to make sure and it was just a yard or two back. It was right up near the line of scrimmage. It was a good call. It never made it from what we saw. You teach the kids when it's a short punt to get away from it so they don't get hit so our kids just scattered and a couple of our guys assumed it was done and thought they heard a whistle and the next thing they knew (Free State) picks it up and runs it. So instead of being down 14-7 with the ball on their 13-yard-line, we're down 21-7.''

After getting a 3-yard touchdown run from senior quarterback Jet Dineen to cap Free State's first possession of the game, Washburn Rural senior Robby Bolin answered with a 93-yard kickoff return (Giles Frederickson kick) to tie the game at 7-7 with 8:02 left in the opening quarter.

But Free State broke the tie with a long scoring drive, capped by a 6-yard run from senior Dash Cleveland with 3:05 left in the first and then added to its lead with Long's TD.

The score remained 21-7 into the second half before the Firebirds scored three touchdowns in the third quarter to put the 8-2 Junior Blues away.

Free State went up 42-7 with 4:38 left in the third on Dineen's third touchdown of the night before Washburn Rural got its final points of the night on a 46-yard field goal from Frederickson, a senior.

Dineen finished with 167 rushing yards on 23 carries while Cleveland had 109 yards on 21 attempts. 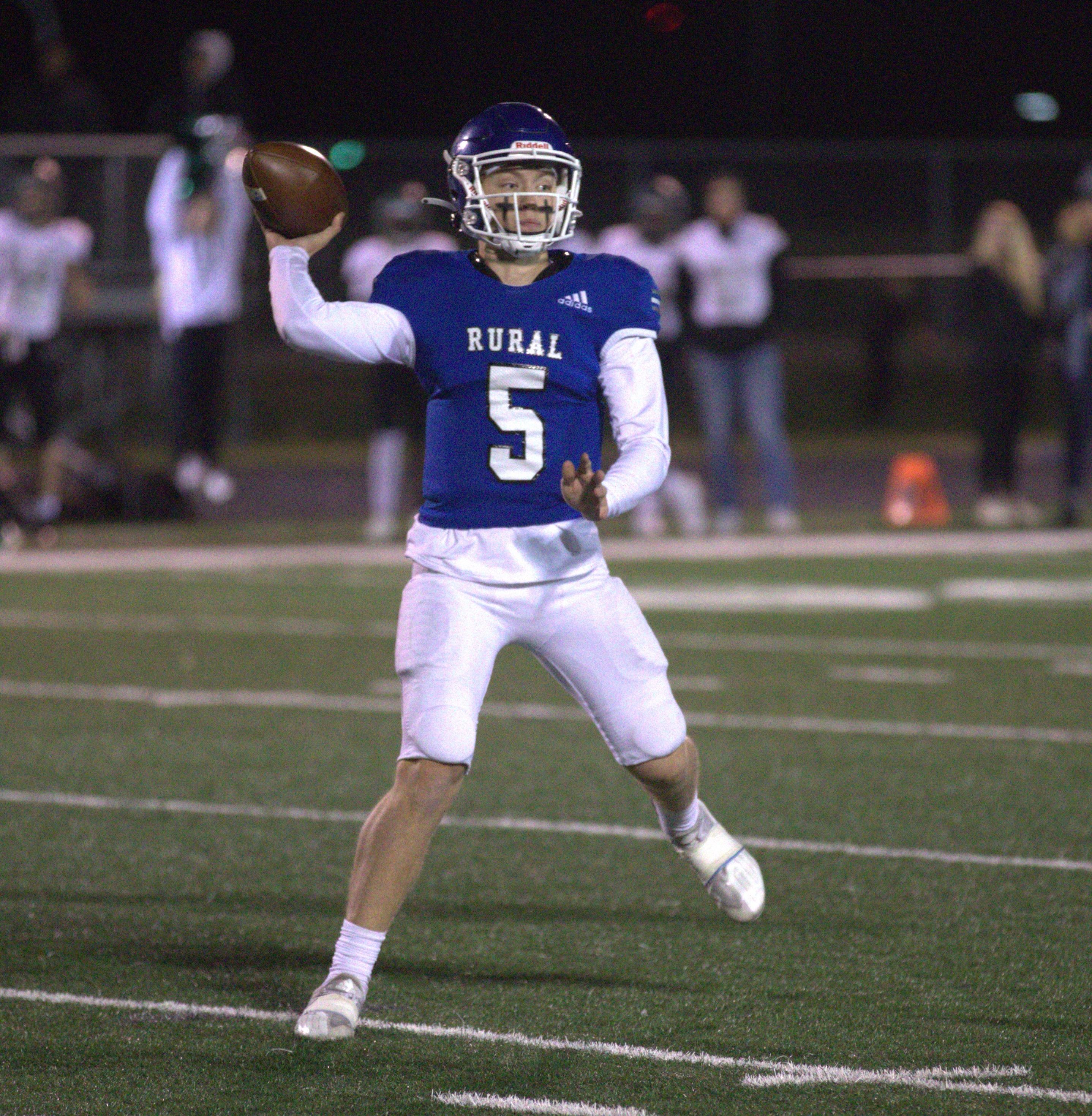 Washburn Rural had trouble moving the ball consistently against Free State's defense, with sophomore quarterback Branton DeWeese ending the night at Rural's leading rusher with 45 yards on seven carries and passing for 82 yards on an 11 of 26 night (one interception).

While Rural was obviously in pain after having its season ended, Buhler said he hopes the Junior Blues can someday soon appreciate what they accomplished this fall, including a share of the Centennial League title.

"I think they'll get to that point, especially the seniors when they get a chance to step away and look back,'' Buhler said. "I hope for the young guys it's two things. I hope they're motivated. We've gotten this far and we now have a gauge of where we need to take the next step.''

Free State, which improved to 8-2, will travel to Derby next week to face the defending state champs in a 6A quarterfinal.