There were some stops along the way, but junior receiver Peter Afful is thankful that he eventually found his way to Washburn University.

After playing for Dirk Wedd at Lawrence High, the 5-foot-10, 190-pound Afful had brief stops at Hutchinson Community College and Baker University and played a season for Coffeyville Community College before finding a home with the Ichabods.

After biding his time on the scout team in his first season at Washburn in 2019 and having the 2020 season canceled due to COVID-19, Afful has made up for lost time this season for the 7-2 Ichabods.

"It was a great decision,'' Afful said about coming to Washburn. "It was actually between Central Arkansas and here and Central Arkansas ended up keeping their walk-on receiver, so the decision was going to be of course Washburn after that.

"Coming in, Coach (Craig) Schurig gave me an opportunity to earn a spot and I earned it and I'm just running with it now.''

Peter Afful has become a big-play receiver for the 7-2 Ichabods, turning seven of his 21 receptions into touchdowns. [FIle photo by Rex Wolf/TSN]

Afful is part of a talent Ichabod receiving corps that includes standouts James Letcher Jr. and Jace Williams, but Afful has 21 catches for 426 yards and leads the team with a 20.3-yard average per catch and is tied with Letcher for the team lead with seven receiving touchdowns. He also has 82 yards on just four rushing attempts.

"When you're on a team filled with great receivers such as Jace (Williams) and JJ Letcher your opportunities are somewhat limited and when you get those opportunities you've got to be sure to make the most of them and that's what I try to do,'' Afful said.

Afful said that practicing but not seeing game action in '19 for the Ichabods primed him for the success he's had this fall.

Afful is also quick to credits his fellow Washburn receivers for creating opportunities for him.

"Coming in to Washburn I realized they had good receivers before me, so I told myself my goal was to make sure none of us are (double-covered) and that defenses have to respect the whole field,'' he said. "I feel like I've been doing a pretty good job of that.

"Teams aren't keying in on just JJ and Jace anymore because they have to respect No. 2 as well.'' 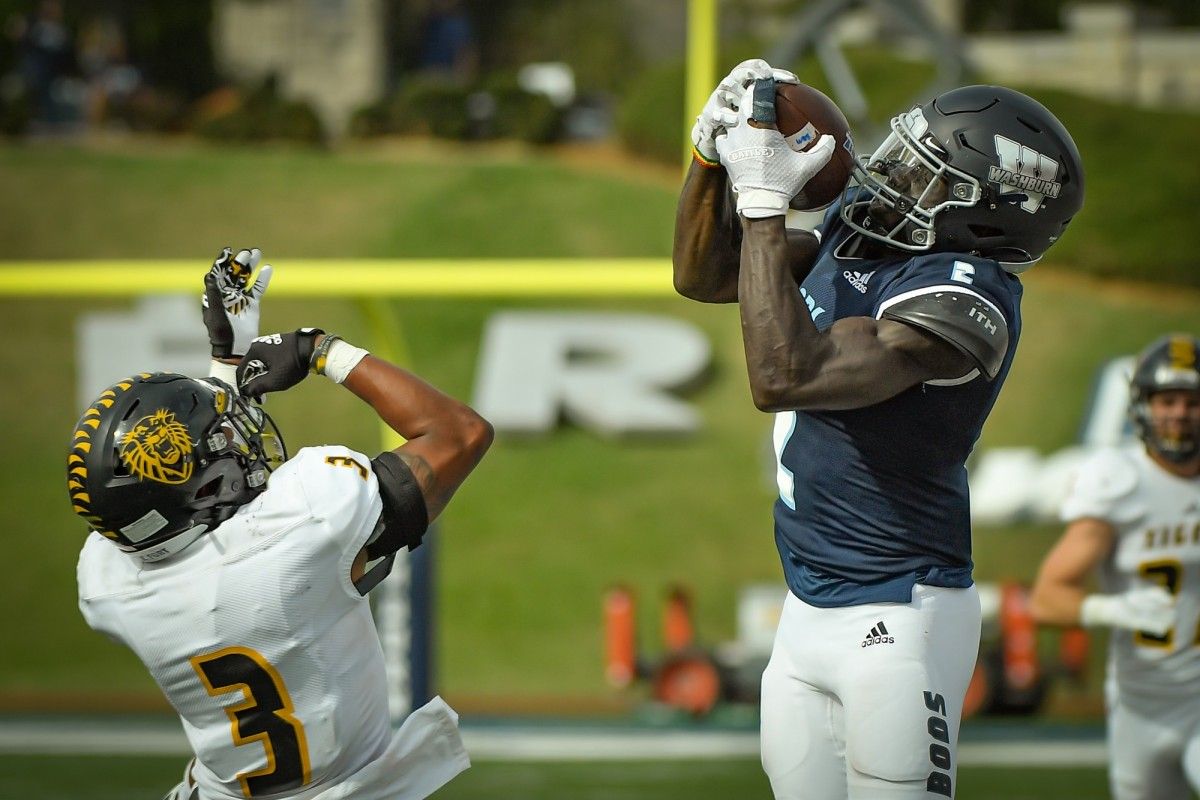 Washburn junior receiver Peter Afful is averaging a team-best 20.3 yards per catch and tied for the team-high with seven receiving touchdowns. [File photo by Rex Wolf/TSN]

Like all receivers Afful would love to see his workload increase as his career progresses, but for now he is just cherishing the chance to contribute to Washburn success this season.

"As time goes on I feel like I can definitely double my stats, but as of now I'm doing what I can to help the team out and it's working,'' Afful said. "Only two losses and we're looking to make a playoff run and as long as we can get some jewelry I'll be happy. I'm having a great time, honestly, with my teammates. I've made great friends throughout this process and you can feel the family vibe in the air around here for sure.

"All that matters at the end of the day is that success. It makes everybody happy regardless of how many catches you have. The campus, the school are happy and it's been awhile since we've had such a winning season so we're going to try to take it the distance and take it all.''