Barta, a senior quarterback, scored the game's first touchdown on a 77-yard run and went on to a huge night in Seaman's 57-6 Class 5A home playoff win over Emporia Friday night. Barta finished the game with 318 passing yards and four touchdown passes on an 18 of 22 performance and added 87 rushing yards on just four carries as Seaman improved to 6-3 on the season.

A senior quarterback, Brian completed 16 of 24 passes for 235 yards and six touchdowns as Cair Paravel moved to 9-0 on the season with Friday's 50-0 win over the Manhattan Eagles. Brian has now passed for 1,758 yards and 42 touchdowns on the season while completing 98 of 139 attempts without an interception.

Carter completed an outstanding junior season with a seventh-place individual finish in Saturday's Class 6A state cross country meet in a five-kilometer time of 18 minutes, 35.2 seconds. A two-time state medalist, Carter led the Junior Blues to a fourth-place team finish.

A two-time Class 5A state medalist, Druse completed her junior season with a sixth-place finish in the Class 5A state cross country meet in a time of 19:10.4. Druse, who led Seaman to a fourth-place team finish on Saturday, finished ninth at state as a sophomore.

A senior place-kicker, Frederickson went 7 of 7 on extra-point kicks in Rural's 52-7 Class 6A playoff victory over Wichita West Friday night. After suffering a bite from a copperhead snake four weeks ago, Frederickson has returned to kick 13 of 13 PATs the past two weeks and is 89 of 91 in his career.

Newkirk, a senior, earned his fourth Class 4A state medal with his third top-three finish in Saturday's state cross country meet, taking third place individually in 16:24.3. Newkirk, who captured city, Centennial League and regional titles this fall, previously posted state finishes of 12th as a freshman, second as a sophomore and first as a junior. 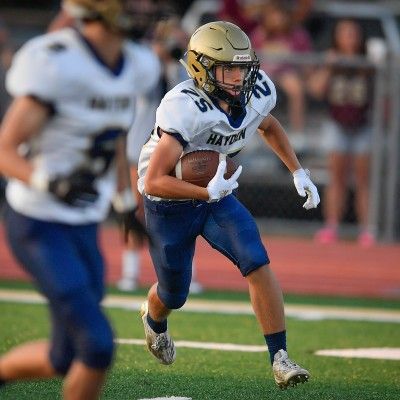