SALINA -- After advancing to the state quarterfinals in 2020, Seaman's volleyball team took another step forward with Saturday's fourth-place finish in the Class 5A state tournament at Tony's Pizza Events Center.

But coach Tatiana Dowling and her Vikings won't be completely satisfied until they get the chance to do what familiar foe Lansing got to do Saturday -- celebrate a state title.

"We took a step and we're proud of what we accomplished this season, but we're not satisfied,'' Dowling said. "We want to come back next year and we want to do better. We want to end the season on a win in the state championship match.''

Lansing, which handed the Vikings four of their 2021 losses, went on to claim the state championship with a 25-20, 25-22 win over St. James Academy in the final.

Lansing jumped out to a 7-2 first-set lead over the Vikings in the semis, but Seaman was still within two points (13-11) before the Lions ran off three straight points to take a 16-11 lead.

Seaman got back within 17-14 on a kill from senior Drew Baxter before Lansing outscored the Vikings 8-1 to close out the set.

The Vikings took an 8-7 lead in the second set on a kill from freshman Maegan Mills and the score was tied at 10-all before the Lions scored 10 of the next 11 points to take control.

"They're a great team because they push us to be better,'' Dowling said. "They make great plays which forces long rallies and forces us to execute.''

Seaman was within 10-8 of Aquinas to start the third-place match but the Saints rallied for a 21-10 lead before closing out the 12-point first-set win.

Seaman and Aquinas were tied at 16 and 17 in the second set before the Saints opened up 23-19 lead and scored the final two points of the match for the five-point victory. 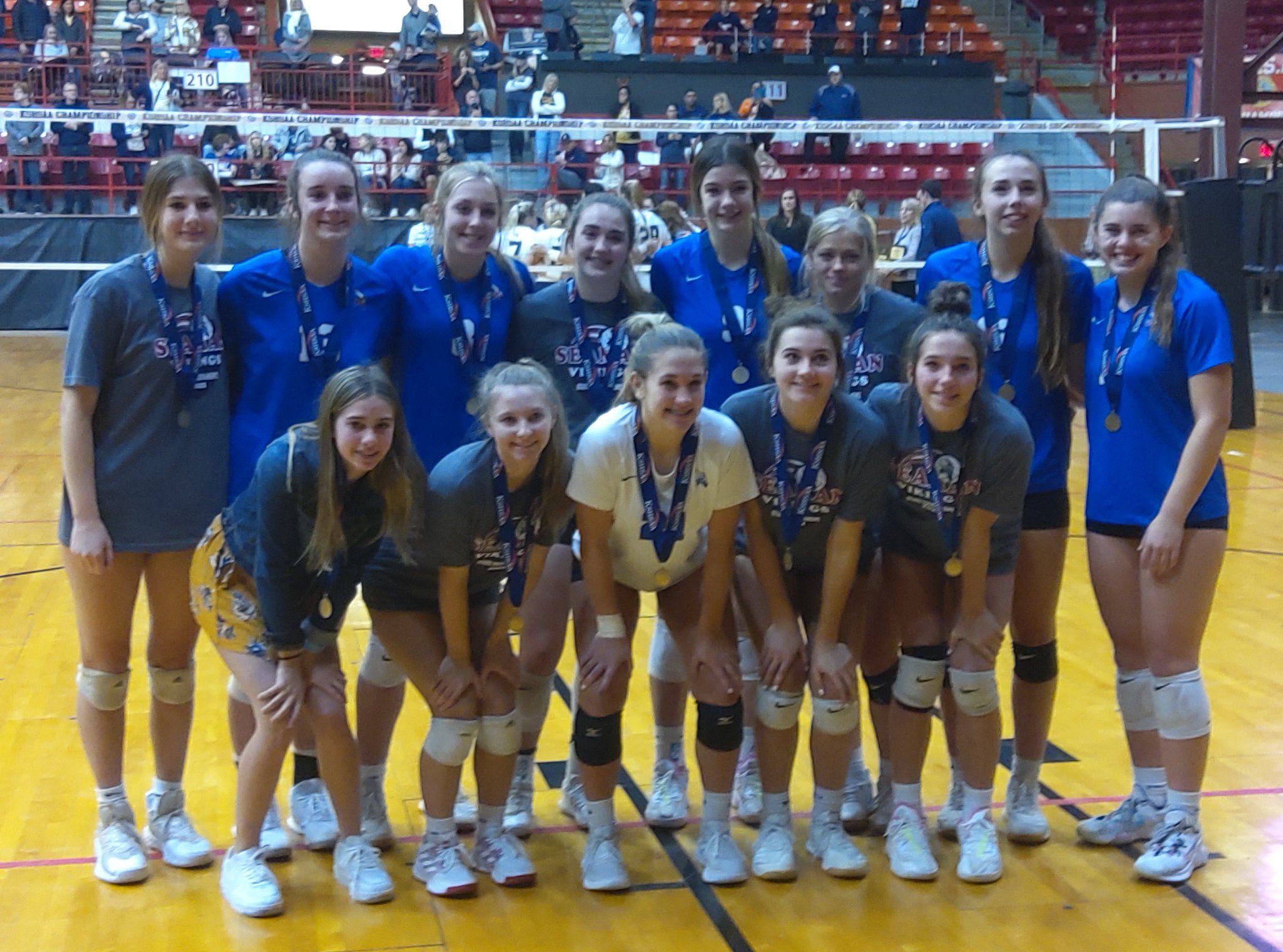 Seaman's volleyball team poses for a team picture after Saturday's fourth-place finish in the Class 4A state tournament. [Photo by Rick Peterson/TSN]

Saturday was the final high school matches for seniors Baxter, Elizabeth Stover and Elizabeth Meier, but the Vikings will return nine underclassmen off their state roster.

"We do have great young players and there's lots of talent coming back but it's hard when lose seniors, especially seniors like Drew who are great vocal leaders and who play all the way around for us and are leaders during the season and during the offseason,'' Dowling said.

"All of our seniors stepped up in different ways and became leaders for us throughout the season. It's always hard when you lose three people who were a big part of your team.''