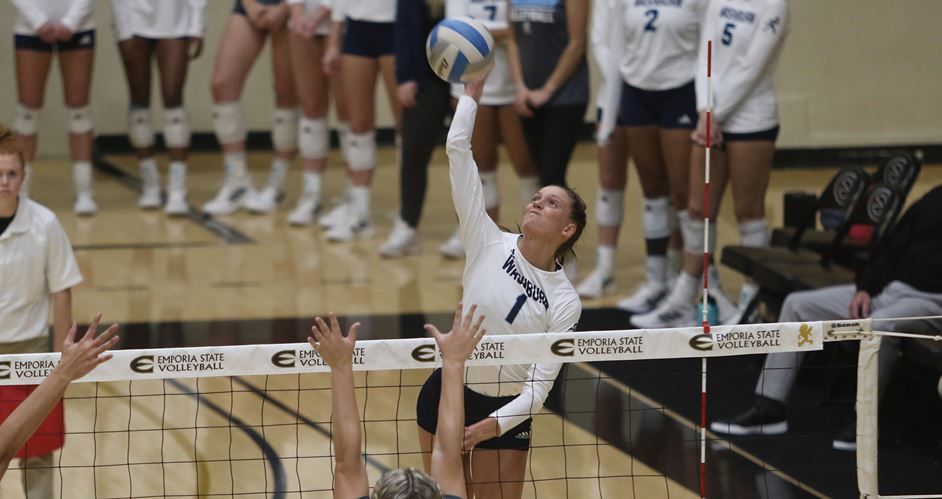 Washburn senior Genna Berg became the 10th player in school history to surpass 1,000 kills and 1,000 digs in her career Tuesday night at Emporia State. [Photo courtesy of Washburn Athletics] The Ichabods got off to a slow start and trailed 3-0 in the first set before responding with three consecutive points of their own to even the match.

The Hornets (4-17, 2-12 MIAA) knotted the score at four when a kill by Kelsey Gordon, a former Emporia High standout, ignited an 8-1 scoring run to give Washburn the lead for good. Emporia State pulled within five points at 20-15, but the Ichabods won five of the next six points to claim the opening set.

The Hornets captured the opening point of the second set, but their lead was short lived as the Ichabods quickly jumped out to a 12-4 advantage. A 4-0 run with kills by four different players pushed Washburn's lead to double-digits, 22-12. A block by Gordon and Jalyn Stevenson closed out the 25-16 win and put Washburn ahead in the match, 2-0.

Washburn led from start to finish in the final set. The Ichabods went in front 11-4 and benefited from eight Hornet errors during that time. Trailing 19-11, the Hornets fought back and got within three points at 24-21, but a kill from Allison Maxwell ended their late rally. The Ichabods finished the match with a .262 hitting percentage while holding the Hornets to an .043 mark. Washburn led in kills, 38-26, and in blocks, 9-3. Berg achieved her milestone with eight digs and added six kills. She now has 1,395 kills and 1,003 digs in her career as an Ichabod. The last Washburn player to accomplish the feat was Leanna Willer in 2015 during her junior season. Maxwell hit .412 in the match and led the Ichabods with eight kills. Stevenson contributed six digs, five kills and was a part of five blocks. Allison Sadler recorded 25 assists and eight digs. Shawnee Heights product Faith Rottinghaus led the team with 24 digs. Leah Mach had a match-high 12 kills for the Hornets to go with her 11 digs. Washburn will play a pair of matches this weekend, at Central Oklahoma on Friday and at Newman on Saturday.