Rural volleyball rolls to 6A sub-state crown; Seaman qualifies in 5A

OK, so Washburn Rural's volleyball team may not have been perfect in Saturday's Class 6A sub-state tournament at Rural, but the 38-0 and nationally-ranked Junior Blues were pretty darn good, earning their fifth straight state tournament berth and their 23rd in the past 25 seasons with a dominating sub-state run.

"When we're aggressive serving we're going to miss one or two but we didn't miss after the first one or the second one. We would have a run and then we would miss and that makes a big difference.'' 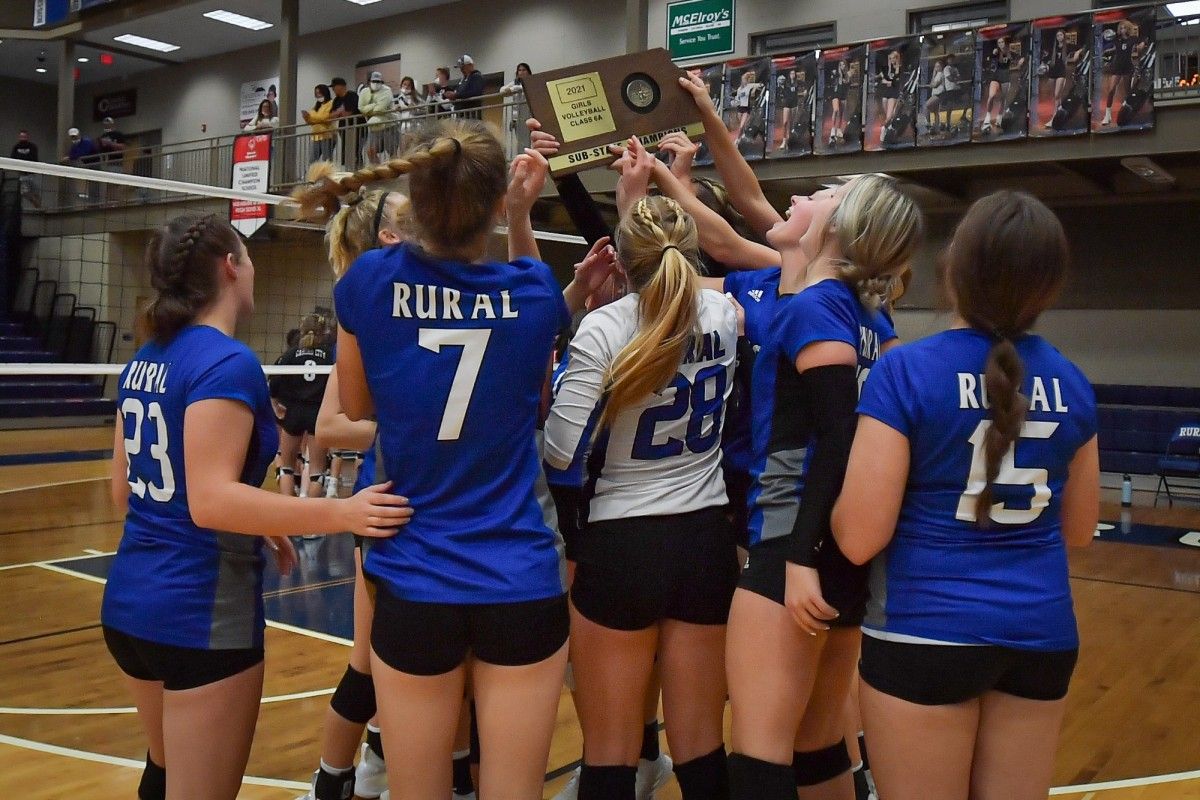 "Every team in sub-state is going to come and play their best so we just made sure we didn't let up or overlook teams.'' DeLeye said.

The Junior Blues put 14-22 Garden City away early in the championship match.

Rural took a 7-0 lead on a DeLeye kill and junior Chloe Carlgren delivered a kill to put her team in front, 15-4.

A long service run from DeLeye, including a pair of aces, put Rural up 19-4 before the Junior Blues closed out the 20-point win.

Rural took a 10-3 lead in the second set and used a pair of kills from junior Taylor Russell and a kill from sophomore Jada Ingram to take a 15-4 advantage. 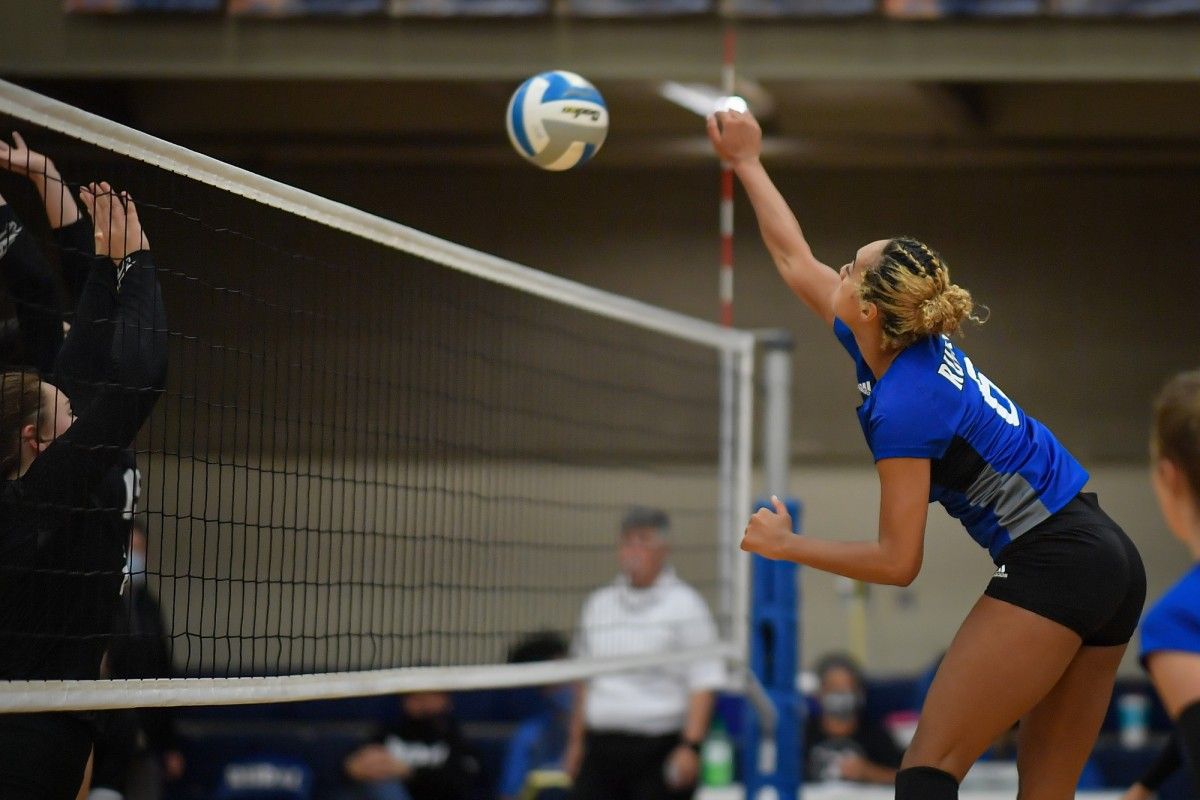 Ingram later had back-to-back kills to give the Junior Blues a 19-5 advantage and Rural ended the match on a service ace from sophomore Zoe Canfield.

Next up for Rural is the 6A state tournament Friday and Saturday at Salina's Tony's Pizza Events Center and Bordewick said he and assistant Amanda Vanderbogart feel like the Junior Blues are ready for the challenge that awaits them at state.

"We really like where they're at mentally and I knew that they had plans to practice next week,'' Bordewick said. "That's what their goal was so we're going to show up Monday and take it one day at a time and hopefully get better at something.''

"We just know that we've got to show up and get even better this week to be ready to compete and hopefully get that end goal,'' she said.

Rural, second in 6A in 2019 and third a year ago, will be the No. 1 seed, but Bordewick said the fact that the Junior Blues are undefeated won't mean much when they take the floor.

"Everybody's really 0-0 and that's the way we've got to approach it,'' he said. "We'll be the No. 1 seed, but that doesn't mean anything. We've been there quite a few times and No. 1 seeds get knocked off sometimes so you can't rest anything on that.''

SEAMAN ROLLS TO 5A BERTH

After ending a lengthy state tournament drought in 2020, Seaman earned a return trip to state with a pair of straight-set wins in Saturday's 5A sub-state hosted by Eisenhower in Goddard.

The 5A state tournament will be played at Tony's Pizza Events Center in Salina next Friday and Saturday. 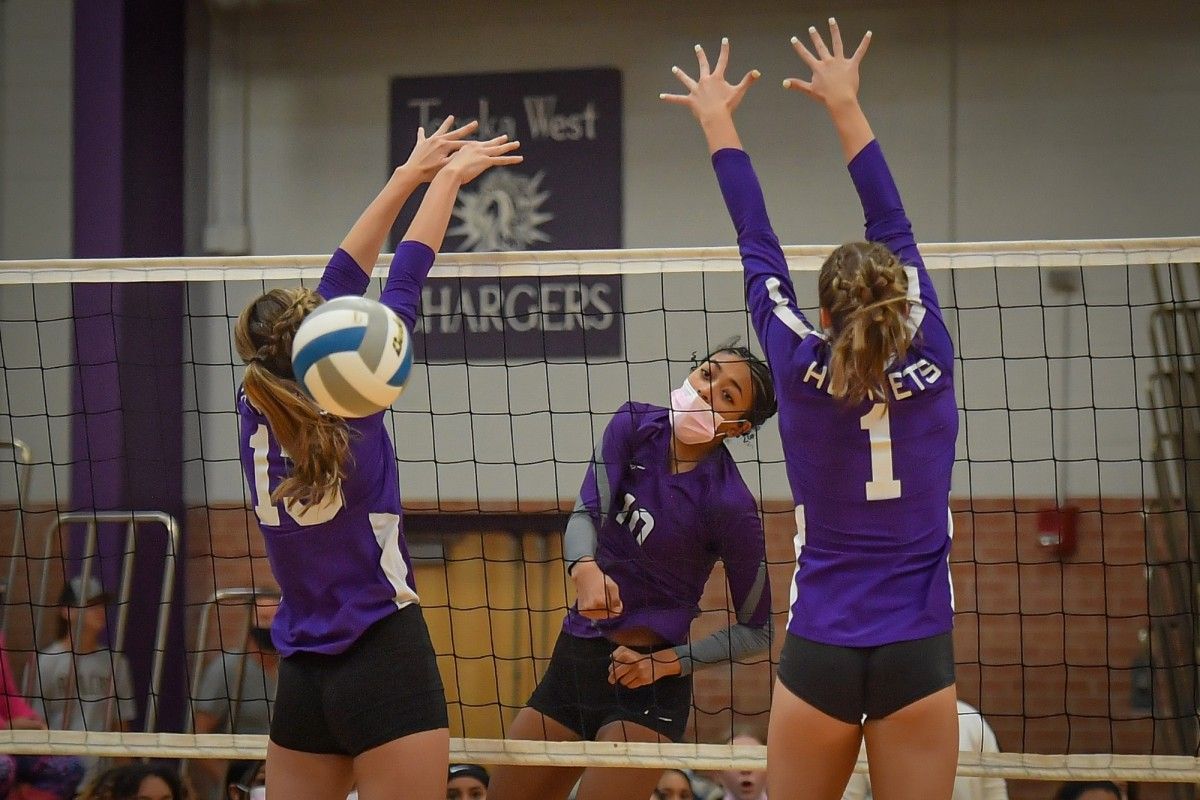 Topeka West sophomore MaKinsey Jones gets a spike through a pair of Valley Center defenders during Saturday's Class 5A sub-state tournament at West. [Photo by Rex Wolf/TSN]

Topeka West's volleyball team earned the right to host a 5A sub-state tournament with an outstanding 27-9 regular season, but the Chargers' bid for a state berth ended with a tough three-set semifinal loss to Valley Center, which entered the tournament with a 13-20 record.

Valley Center took a 25-22 decision over the Chargers in the first set before West forced a third set with a 25-22 win.

Both teams had multiple match points in the third set before the Hornets finally prevailed, 31-29.

Bishop Carroll went on to claim the sub-state title, taking a 25-14, 25-14 win over the Hornets in the championship match.