Perfection! Seaman's Unruh and Sweeney cap 36-0 year with 5A title

But it was the happiest of tears, the kind of tears that come with completing a perfect 36-0 season with a Class 5A state doubles championship.

"I think both of us worked so hard for this and we wanted it so bad,'' Unruh said. "It's just a reflection of all the hard work and the hours that we've spent.

Impressive from the get go this season after posting a fourth-place state finish a year ago, Unruh, a senior, and junior Sweeney were even better Saturday on the Emporia High courts and got better as the day went on, capped by a 6-2, 6-1 win over Andover Central's Maya Chon and Bryer Geoffroy in the championship match. 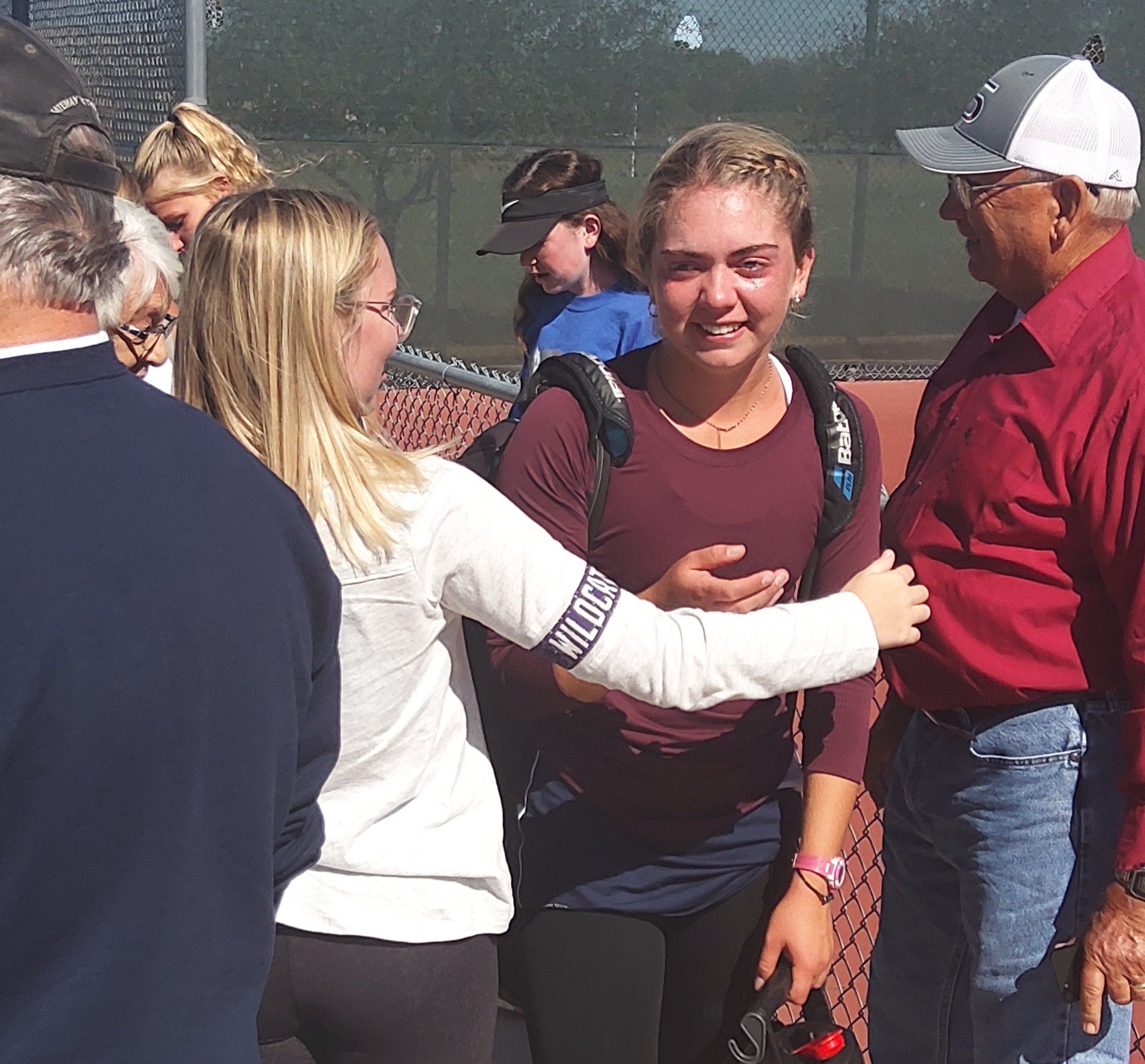 Seaman senior Grace Unruh is congratulated by family and friends and Unruh and doubles partner Lauren Sweeney won the Class 5A doubles championship Saturday at Emporia. [Photo by Rick Peterson]

The Seaman duo actually started their semifinal match a little slow, falling behind 3-0 in the first set against Andover's Brooke Walker and Anna Jittawait, but Unruh and Sweeney rebounded to take a 6-4 first-set decision and then advanced to the finals with a 6-3 second-set win.

"We got down and we weren't playing with energy and we were kind of making stupid errors but when we started coming back we were like, 'This is it, there's no second chances here.' and I think that was huge motivation,'' Unruh said. "We didn't want to be in that spot we were in last year.''

Unruh and Sweeney also lost the first game of the championship match and led just 3-2 before sweeping the final three games to take the 6-2 win. The Seaman team jumped in front of Chon and Geoffroy 4-0 in the second set and was never seriously threatened.

"This was the goal,'' Unruh said. "I never imagined it being an undefeated state title, but it feels so good. I wouldn't have wanted to end it any other way with any other person on the court with me.''

Sweeney said the only downside to the state tournament was the realization that she'll never play another high school match with Unruh.

"I'm very sad,'' she said. "I literally love her so much, on and off the court. We're best friends and playing with her means so much to me.''

Jamie Robinson, who took over as Seaman's coach this fall, said that he knew early on that Unruh and Sweeney could be state champs.

"Absolutely,'' Robinson said. "They are so disciplined and so driven. They push each other, too.''

Seaman also got an 11th-place finish from junior singles player Nina Del-Zio, who took a 9-2 win over Annabelle Aldrete of Maize South in her final match.

Seaman finished fifth as a team with 22 points while Andover won the team championship with 46 points.