The grass, or in the case of college football, the turf, isn't always greener elsewhere and Washburn University star receiver/returner James Letcher Jr. is thankful he figured that out before making a life-changing decision. 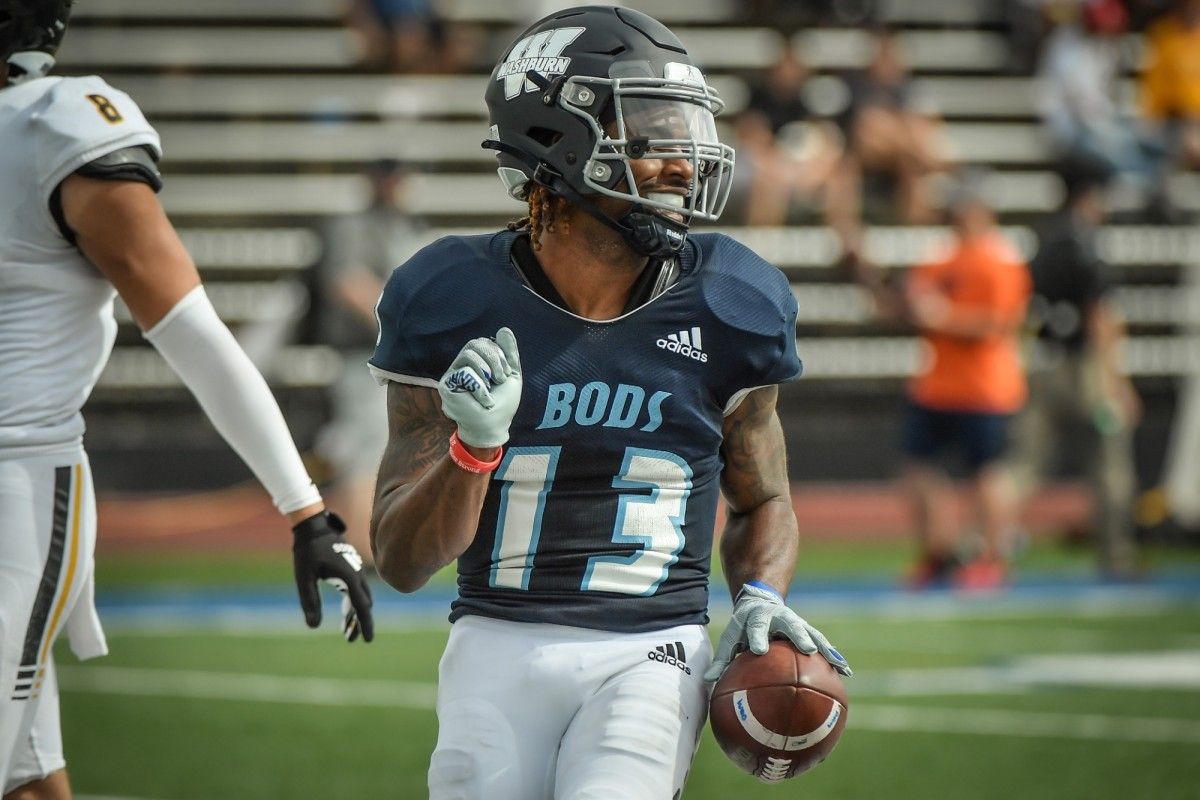 Washburn star receiver/returner James Letcher Jr. is having another banner season for the 4-2 Ichabods, who host Northwest Missouri on Saturday. [Photo by Rex Wolf/TSN]

There was a recurring rumor this past spring and summer that Letcher was mulling over the possibility of entering the NCAA Transfer Portal and trying to make the jump to a Division I program.

The rumor wasn't that hard to believe, considering the fact that Letcher was coming off an All-MIAA year in 2019 and that the transfer portal had became the 'in' thing to do for players all over the country.

But while the former Piper star admits that he did consider all his options during the Ichabods' long layoff due to COVID-19, he also knows he made the right decision in staying right where he was.

"A lot of it was just talk, a lot of it was looking at things,'' Letcher said. "I got pulled into a bit of the conversation because my roommate, Collin Wilson, ended up entering the transfer portal. Since we were so close and we were kind of feeding off each other back in 2019, I could see why people thought that.There were some long talks I had with a few of my teammates and my family back home and I feel like we all made the right decision for me to stick it out here.

"This is definitely home and it's right down the street from my personal home. I've been here so long I've got good connections with the coaches and the players and it was the right decision for me to stay.''

There were several family and football factors that entered into Letcher's decision to remain at Washburn.

For one thing, Letcher wanted to be close to home to help his father, a former football star himself, recover from serious health problems.

"He ended up getting sick right before COVID hit with his gallbladder,'' Letcher said. "He had to get that removed and he ended up having a lot more complications with that. He ended up having two massive strokes and went into a coma, but he's doing much better now. He's getting back to his old self and walking a lot better than he was and he's getting his feet back under him.''

Over the summer Letcher spent a lot of time in Kansas City, Kan. doing what he could to help out.

"That's one of the main reasons I stayed home, so he could see me working hard and I could see him getting better and better.every day.'' Washburn star James Letcher Jr. has caught 34 passes for 559 yards and six TDs for the 4-2 Ichabods. [Photo by Rex Wolf/TSN]

Another major consideration was the fact that Letcher knew the 2021 season could be a big one for himself and the Ichabods.

That is proving to be true thus far, with Washburn taking a 4-2 record into Saturday's home tilt with undefeated and second-ranked Northwest Missouri State (1 p.m. kickoff) while Letcher has caught 34 passes for 559 yards (16.4 yards per catch) and six touchdowns and ranks 13th in the nation in all-purpose yards with 158.8 yards per game.

Letcher and the Ichabods are coming off a big 23-20 overtime win over Fort Hays State, with Letcher hauling in the 19-yard game-winning touchdown pass from senior quarterback Mitch Schurig. On the day Letcher had five catches for 56 yards and two TDs.

"It was great, it felt amazing,'' Letcher said. "It's always good to get another 'W' under our belts, especially coming off a hard loss (35-30 at Emporia State). It's good to get the momentum back and we've got to keep it going.

"Me and my teammates know it's going to be a dogfight every game and we're going to have to fight to the best of our ability.''