Walk-on Brehm comes through in a pinch for Washburn football

Freshman Trenton Brehm came to Washburn University to play baseball, but almost on a lark decided he might as well try to double up in football.

The Ichabods are sure glad he did.

"I wanted to play baseball in college, that's what I wanted to do,'' said Brehm, a native of Papillion, Neb. "But then I was like, 'Maybe I should just try kicking in college, too.' I asked the baseball coach (Harley Douglas) if I could get the football coach's number and see if I could come play for the team. I texted coach (Zach) Watkins (WU assistant) and I came down on a visit and this is where I ended up.''

A second baseman in baseball, Brehm had impressive kicking credentials in high school for Papillion La Vista South, making nine of 12 field goal attempts as a senior, including a long of 52 yards.

But with the Ichabods returning standout Kameron Lake, the plan was for Brehm to redshirt this season and then most likely serve as Lake's backup.

That all changed when Lake started experiencing problems with his leg early in the season.

Despite the pain Lake handled Washburn's kickoff and placement duties through the first two weeks of the season, but in Week 3 Brehm was installed as the Ichabods' kickoff man for the road game at Nebraska-Kearney.

"About midway through the week of preparation for Kearney, coach (Craig) Schurig came up to me and asked I would be OK with traveling to Kearney and doing kickoffs,'' Brehm said.

The move caught about everybody by surprise, including Brehm's family.

"My dad didn't believe me the first week when I said I going to go play,'' Brehm said. "I was a little nervous getting thrown out there. It was in my home state that first game, so that was kind of cool, but I was definitely pretty nervous going out there for my first college game.''

The next week, against Missouri Western, Brehm handled all of Washburn's place-kicking duties, a role he has filled the past three games for the 4-2 Ichabods.

"When I started doing everything, that's when the real nerves kind of kicked in,'' Brehm said. 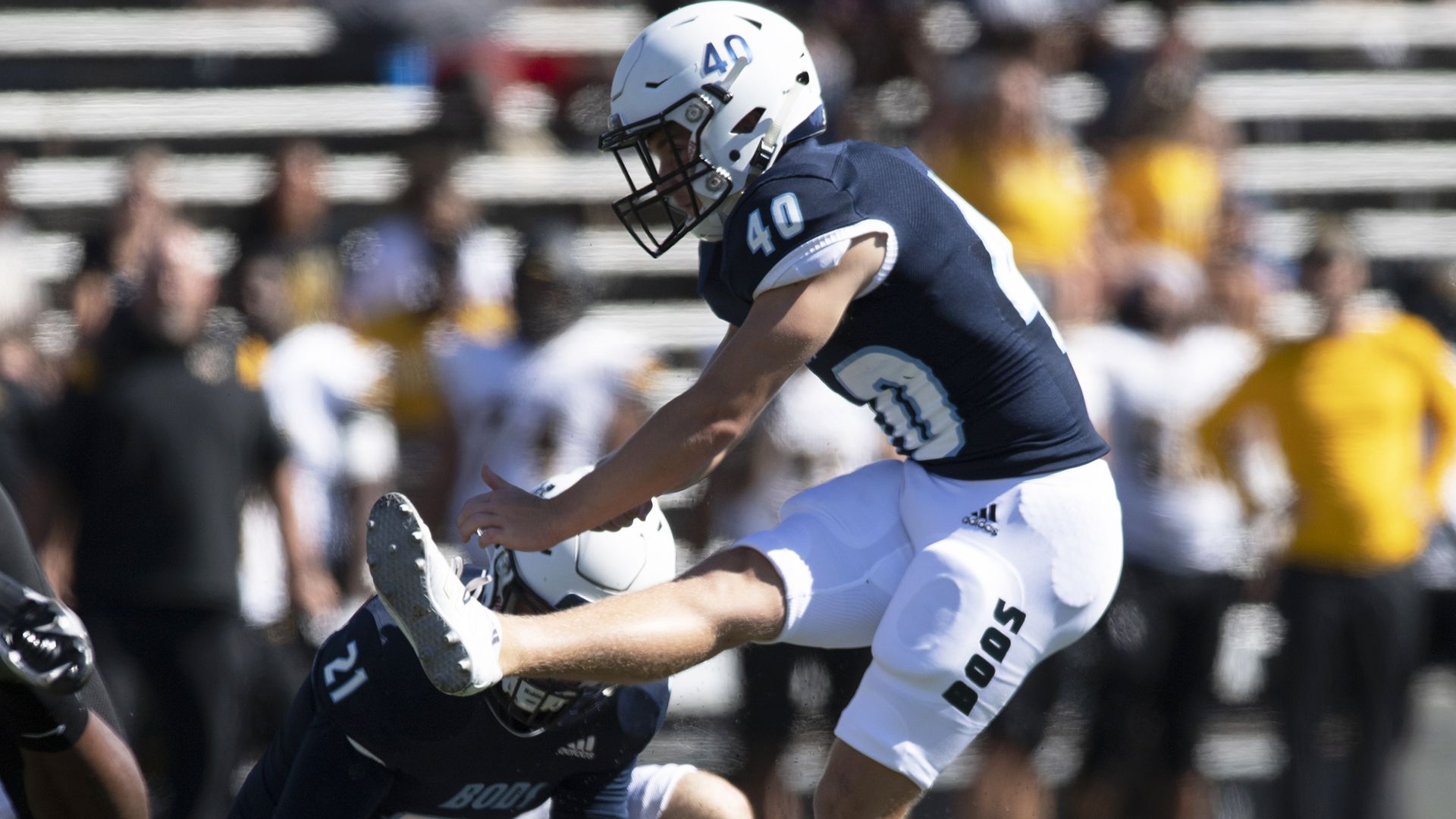 True freshman Trenton Brehm has turned in a solid performance as Washburn's place-kicker after taking over for injured starter Kameron Lake. [Photo courtesy of Washburn Athletics]

Brehm has connected on two of three field goal attempts and 10 of 12 extra-point tries and is coming off his best game in last Saturday's 23-20 overtime win over Fort Hays State, kicking a 35-yard field goal and going two 2 of 2 on extra points.

"I feel like I'm doing pretty good,'' Brehm said. "I feel like I've gained a lot of confidence over the weeks and everyone's been super supportive of me getting thrown in there. I feel like I've definitely gotten a lot better and have continued to progress throughout this year.

"I feel a little more confident going out there each and every time.''

Schurig is quick to praise Brehm for how he's handled a challenging situation.

"He's just handled it beautifully,'' Schurig said. "I think that whole (kicking) unit has handled it well, and Kam has been very supportive. (Brehm's) done a tremendous job and we're thankful.''