Seniors show out for No. 1 Washburn in sweep over No. 15 Lopers

Starting off a fourth consecutive week at No. 1, Washburn University volleyball was faced with a matchup against No. 15 Nebraska-Kearney Tuesday night.

The match ended a five-game homestand as the Ichabods are hitting their stride while entering the thick of conference play.

“Just be humble, play, and enjoy the dadgum year. It's been a good year, so lets just keep enjoying it,” said coach Chris Herron.

The Ichabods did keep having fun Tuesday on the way to completing a sweep over the Lopers in three sets, all ending 25-22.

The win continued Washburn’s undefeated march through MIAA play, as well as completed a regular-season sweep for the Ichabods over their previously top-ranked conference rivals.

“Our class, we want to win everywhere we go at this point, so beating them on our floor one last time was really good, you know I hope we get them in the postseason again, beating a team three times is really hard, but I’m so excited for that opportunity as well,” senior setter Allison Sadler said.

The match looked murkey to start, with the Ichabods in a 4-0 hole from the jump. That is when Washburn’s offense came alive to the tune of 16 kills and a .314 attack percentage in the set. The attack came from the middle as the trio of Kelsey Gordon, Allison Maxwell and Sydney Fitzgibbons combined for 14 kills.

“I think Syd and Kelsey came through for us and did a tremendous job and that was the difference in the match,” Herron said.

The second set started with Washburn out in front 3-0 and they would have Kearney on its heels the entire set before closing the door on another 25-22 set. The set was nearly spotless for the Ichabods, as they committed only two errors compared to nine from the Lopers.

There was no separation early on in the third set as the two sides split the first 12 points before Washburn broke it open. The offensive attack was balanced, with five players recording at least three kills, and it was all orchestrated by Sadler who notched 17 assists in the set.

Maxwell led the way for the Ichabods with 12 kills while Gordon and Fitzgibbons added nine and 10 kills, respectively, with an attack percentage above .550 for both.

In the back row, senior libero Faith Rottinghaus had 22 digs, while Sadler had 40 assists at a .400 assist rate to go along with nine digs. 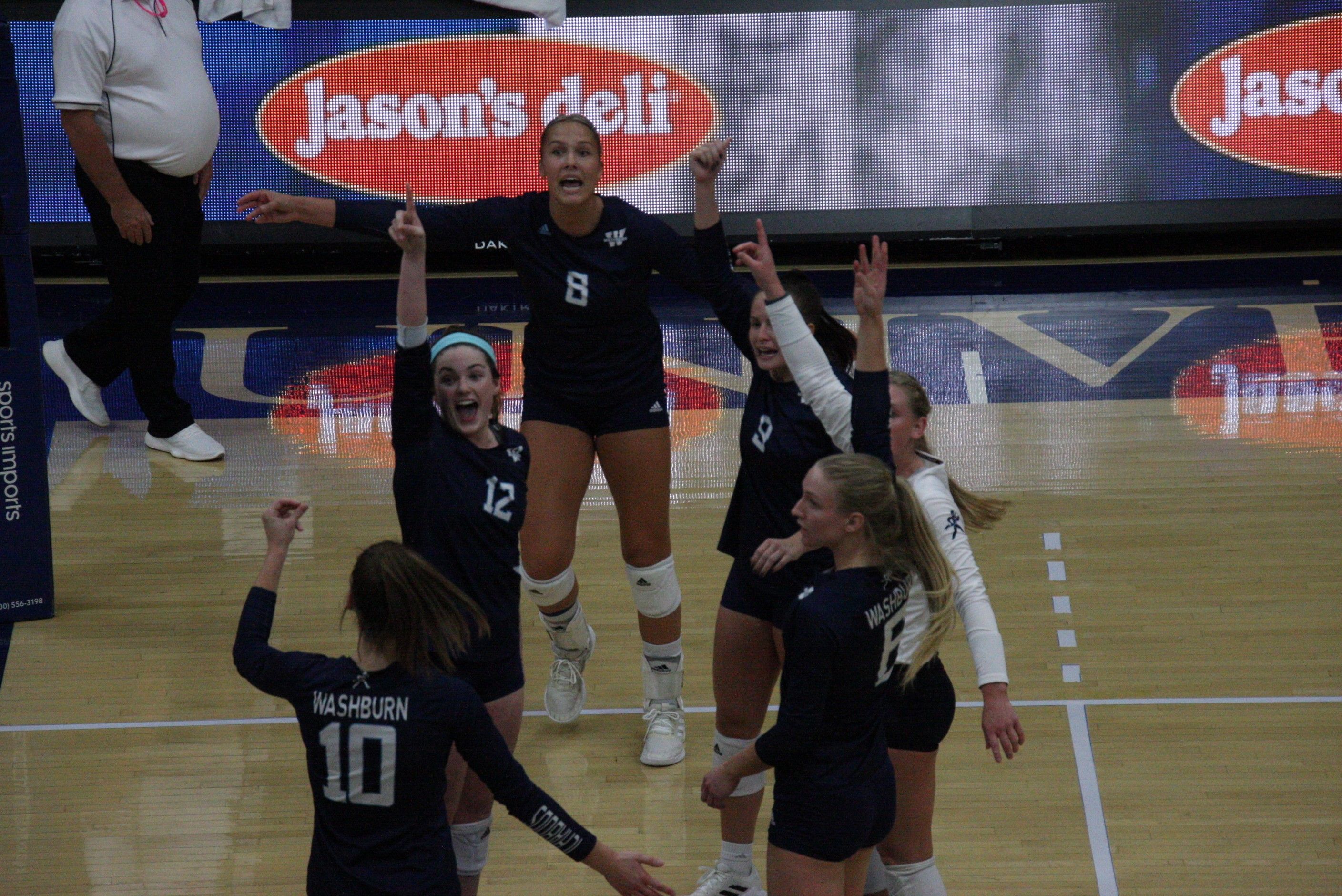 The win moved the team to 17-1 on the year, with nine wins in a row led by fifth-year seniors all-around.

“I’m the one that’s benefiting from this more than anything,” said Herron on all of the seniors who returned for a fifth year. “I like them so dang much that I don’t know what the hell I’m going to do without them next year.”

Next up for Washburn is a road trip to take on No. 9-ranked Northwest Missouri State on Oct. 15.