Topeka West junior quarterback Malachi Berg is regarded as a very capable passer and he did throw for a pair of touchdowns and a 2-point conversion Friday night against Highland Park.

But Berg and his Charger teammates did a lot more damage with their legs against the Scots, rushing for 517 yards and nine touchdowns in Topeka West's 80-48 Centennial League win at Hummer Sports Park.

"Our game plan was just to shove it down their throat,'' Berg said. "They couldn't stop it, so that was our game plan.'' 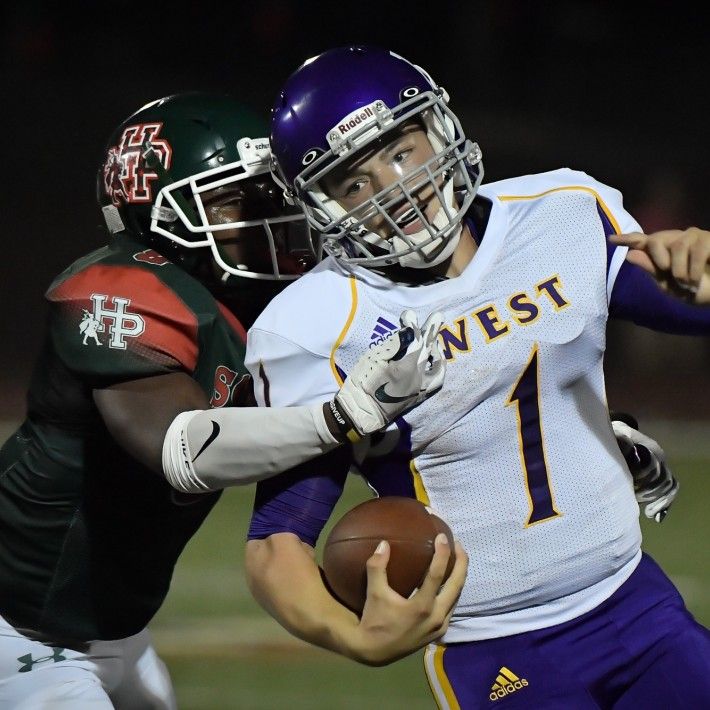 Topeka West junior quarterback Malachi Berg had a huge night for the Chargers in Friday's 80-48 win over Highland Park. [Photo by Rex Wolf/TSN]

West coach Ryan Kelly agreed with his QB that Friday was all about the power game.

"We made a couple of changes in how we play up front and it's starting to benefit us,'' Kelly said. "We just felt like we could move the ball on the ground tonight.

"It's a ground and pound philosophy. I know it's a little more play in the phone booth-type offense, but it does open up some opportunties.''

And on the few occasions West did go to the air the Chargers were successful, with two of Berg's three completions going for TDs and the other setting up a score.

"Once we shoved it down their throat it was way easier for me to pass,'' Berg said. "We only threw the ball four times, but when we did we connected on them.''

Junior fullback Xavier Alexander had a productive night for West, running for an 8-yard touchdown and three 2-point conversion runs and scoring on 12 and 47-yard passes from Berg as the Chargers improved to 2-4 overall and in the Centennial League.

Highland Park, which fell to 0-6 with its 62nd straight loss dating back to 2014, drew first blood with 1:54 left in the first quarter on a 15-yard TD pass from senior Kellan Spruce to junior A'Ydren Drew-Gregory and a 2-point conversion run from former Charger Tyrell Reed.

Topeka West rallied for a 22-14 halftime advantage, but Highland Park tied the game at 22 with 9:46 left in the third on a 46-yard pass from Spruce to Richardson (Reed conversion run), before West took control with a 30-point third quarter.

Reed, a junior, rushed for 158 yards and a touchdown on 18 carries while junior Tre Richardson rushed for 87 yards and a TD on seven carries and caught six passes for 99 yards and three touchdowns.