Bayonne, N.J. will always be home for Washburn University defensive back Marquise Manning.

But after six years with the Ichabods, Topeka is definitely a strong 1-A.

"I came with Malick Fall and we went to the same high school and that made it a bit easier because we had each other,'' Manning said. "We would go out and experience things and talk to people. Guys like (teammate) Jacob Anderson and Phil Anderson (Jacob's father) and Mitch and the Schurigs showed us a lot of hospitality and we were just shocked at how nice and genuine people are here.

"They genuinely care about you.'' 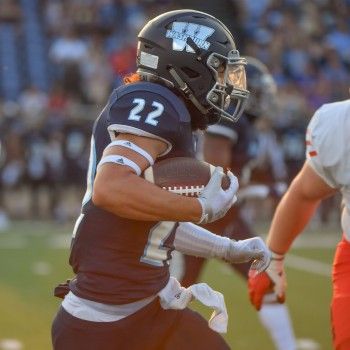 And as he spent more and more time in Topeka and with the Washburn football family he learned to love it even more.

"My home became the team and my mentors became the older players,'' Manning said. "There was Zach Franklin and Corey (Ballentine) and you'd pick a couple of guys you wanted to imitate and be like.

"I gravitated towards Josh Wright and me and Josh got close and I figured out how he was doing things and I started copying and did the same things he did because I wanted to be the player he was. I'm just trying my best now.''

Manning gets back to New Jersey, about a 20-hour drive, once or twice a year, but spends the bulk of his time in Topeka, at least through this year.

"I'll go home for about a week, but I don't want to be home for too long because this is where I should be, with the team,'' he said.

Slowly but surely the 6-foot, 195-pound Manning has become an Ichabod leader himself.

After redshirting in 2016 and seeing action in three games in '17 and five games in '18 Manning earned All-MIAA honorable mention in '19, registering 28 tackles (24 solo) and intercepting three passes.

Manning has continued to be an Ichabod standout this fall, registering 15 tackles (12 solo) with two tackles for loss and two interceptions for Washburn, which will take a 3-2 record into Saturday's home MIAA game against Fort Hays State.

"I've had six years to get comfortable, so that's a lot of practice and a lot of preparation towards just being your best player,'' Manning said.

"I can't even think about how many times I've been yelled at, how many times you messed up, but the more you mess up eventually you'll cut that out. You learn from your mistakes and that's really what I did.''