Hornets capitalize on Washburn turnovers, hold on for 35-30 win

EMPORIA -- Washburn University put together a spirited comeback late in Saturday's rainy MIAA football game against rival Emporia State, but the Ichabods dug themselves a huge hole earlier in the day that was just too deep to escape.

Five Washburn turnovers helped Emporia State build a 35-10 second-half lead and the Hornets were able to hold on for 35-30 victory at Welch Stadium.

"The way the weather was in the first half the turnovers just crush you and then you feel like you're playing uphill,'' Washburn coach Craig Schurig said. 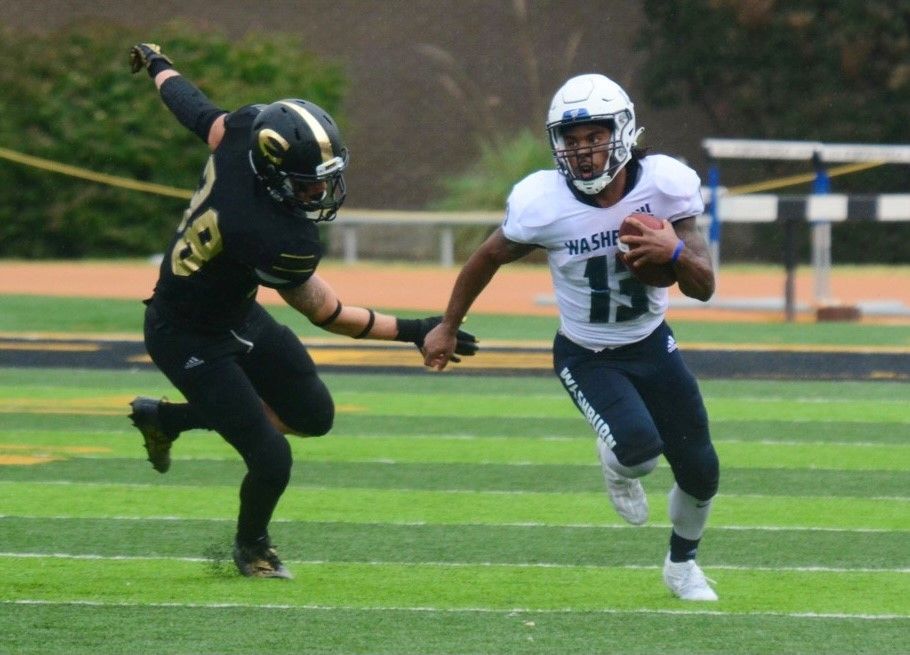 Washburn receiver/returner James Letcher Jr. had a big game Saturday in a losing cause against Emporia State, catching 10 passes for 132 yards and a touchdown. [Photo by Phil Anderson/Special to TSN]

The Ichabods (3-2, 3-2 MIAA) took an early 3-0 lead on a 32-yard Trenton Brehm field goal, but the Hornets answered with a 5-yard touchdown pass from Braden Gleason to former Topeka High standout Corey Thomas as Emporia State (3-2, 3-2) took advantage of an Ichabod fumble at WU's 10-yard-line.

Washburn took one more lead, with Mitch Schurig hitting Peter Afful for an 11-yard TD pass with 32 seconds left in the opening quarter, but Emporia State would score 28 straight points to take control

The Hornets took the lead for good at 14-10 with 12:39 to play in the first half when Gleason found Seaman product Dalton Cowan for a 5-yard touchdown.. The Hornets came up with a huge play later in the second when Jace McDown picked off a Schurig pass and rambled 56 yards for a TD to put Emporia State in front 21-10 at the half.

"Part of our DNA is turnovers and we really haven't got that this season -- I think we've only got one a game -- so we knew it was going to be rainy and we knew (turnovers) were going to be a possibility today and that was the difference in the game,'' McDown said. "That's what we built on and I'm glad we could do that today.''

Things got worse for Washburn when ESU scored on its first drive of the second half and another Ichabod turnover set the Hornets at the WU 12 and Emporia State scored four plays later to go in front 35-10 with 12:35 to play.

Washburn would end the game with 20 unanswered points to make things interesting.

Schurig connected on a 58-yard touchdown pass to James Letcher with 10:21 to go and Schurig found Jace Williams for an 11-yard TD with 6:22 remaining and connected with Williams for a 21-yard score with 29 second left.

After missing a two-point conversion attempt Washburn tried an onside kick, but the Hornets recovered to clinch the victory.

"We didn't give up,'' Craig Schurig said. "We made some big plays, scramble plays the receivers made, and the O-line was blocking well and we got back to where we made it something exciting at the end.'' Letcher caught 10 passes for 132 yards and also had a touchdown on a punt return wiped out by penalty, while Williams had six catches for 88 yards and the two TDs.

Schurig threw for a career-high 410 yards and four touchdowns, completing 34 of 53 passes.

Zach Willis had 10 carries for 86 yards for the Ichabods.

Peyton Lane led the Ichabods with eight tackles while Jacob Anderson and Landen Urban both had six stops, with Urban registering 3.5 tackles for loss and a sack.Letcher finished with 233 all purpose yards and went over the 100-reception mark for his career as an Ichabod. Schurig threw his 50th touchdown pass on the pass to Afful and finished the day with 53 career TDs.

Gleason was 18 of 25 on the day passing for 183 yards and four touchdowns.

"We were just trying to get the ball in playmakers' hands early and let them do their thing,'' Gleason said.

Cowan and Thomas both had three catches while Rossville product Cole Schumacher had two grabs for the Hornets and former Bulldawg Dawson Hammes was in on six tackles (five solo).

The Ichabods will return to action on Oct. 9 hosting Fort Hays State at 1 p.m. in Yager Stadium as part of Hall of Fame Saturday.