No. 3 Ichabod volleyball knocks off No. 1 Nebraska-Kearney, 3-1

KEARNEY, Neb. – A balanced offensive attack paired with a dominate defensive effort powered No. 3 Washburn University volleyball past top-ranked Nebraska-Kearney in four sets on Saturday, handing the Lopers their first loss of the season and snapping their 28-match home winning streak.

Washburn then closed out the match with a convincing 25-16 win to improved to 10-1 overall and 2-0 in the MIAA.

Washburn's last victory against a No. 1-ranked team was a 3-1 win against Nebraska-Kearney on Sept. 15, 2018 in Topeka. That same season, the Ichabods defeated the Lopers again in four sets in Kearney on Oct. 20 when UNK was ranked No. 2 in the nation. Washburn made a statement to start the match and claimed the first four points. Nebraska-Kearney (9-1, 1-1 MIAA) quickly began to chip away at the deficit and took its first lead of the match at 8-7. 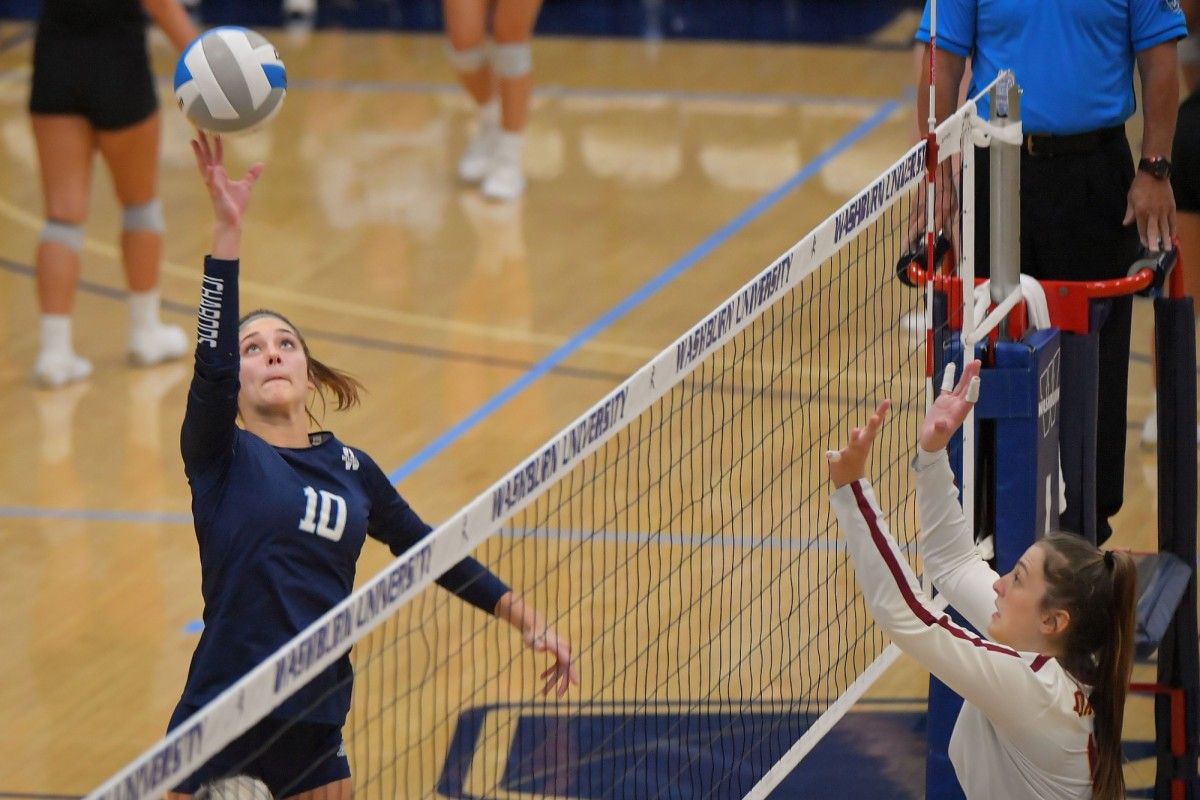 Freshman Jalyn Stevenson led a balanced Washburn attack with 16 kills as the No. 3-ranked Ichabods knocked off No. 1 Nebraska-Kearney, 3-1. [Rex Wolf file photo/TSN]

Trailing 10-8, the Ichabods called a timeout and responded with a 5-0 scoring run to re-take the lead. UNK evened the score at 18-all, but a kill from JalynStevenson  started a 5-2 spurt for the Ichabods and Kelsey Gordon finished off the 25-22 set win with her seventh kill of the set. The script flipped for the start of the second set as the Lopers jumped out to a 5-1 lead, forcing an early Washburn timeout.

Nebraska-Kearney pushed its lead to 9-5 before Washburn started its comeback with a 7-1 burst to go in front, 12-10. The Ichabods held their lead for the rest of the set and went on to win by five points, 25-20. Both teams exchanged blows to start the third set, with seven ties until the Ichabods broke a 10-10 tie with three-consecutive points.

The Lopers fought back and knotted up the score at 16, 17, and 18 before going up 22-18 and eventually capturing the 25-21 win to stay alive in the match. It was back-and-forth scoring again to start the fourth set as the score was knotted up from two until eight when Washburn went on a 3-0 mini run to go up 10-8.

Genna Berg and Allison Maxwell found their groove and combined for five consecutive kills to put Washburn ahead, 15-9.

The Ichabods continued their relentless attack and solid defense at the net to close out the victory with a convincing 25-16 win.Washburn hit .240 in the match and held Nebraska-Kearney to a season-low .134 clip. The Ichabods registered 65 kills on the night, which was 18 more than the Lopers. Washburn's front row held a block party with 14 blocks compared to Nebraska-Kearney's five.Four Ichabods finished in double-figure kills, led by the freshman Stevenson's career-high 16. Stevenson also registered her first double-double as she also scooped up 16 digs.

Berg was close behind with 15 kills and recorded nine in the fourth set.

Maxwell's 13 kills helped her achieve exactly 1,000 in her career as an Ichabod, becoming the 23rd Washburn player to reach the century milestone.

Gordon also added 13 kills and assisted in eight blocks. Allison Sadler finished with a double-double with 58 assists and 12 digs. In the backcourt, Faith Rottinghaus had 28 digs and landed two of Washburn's three service aces. For Nebraska-Kearney, three Lopers finished with double-digit kills, paced by Anna Squiers' 13. The Ichabods return home for a mid-week match on Tuesday, Sept. 21 against rival Emporia State. First serve in Lee Arena is set for 6 p.m.