After time away, Sadler setting herself, WU volleyball up for success

This past spring was one of the toughest times of Allison Sadler's life.

But after surviving that stretch, the senior setter for Washburn University's No. 4-ranked volleyball team is determined to make this fall one of her best.

When the 2020 fall season was wiped out by COVID-19 and pushed back to an unofficial/abbreviated season in the spring, Sadler was left trying to navigate her first semester of law school while also continuing to play volleyball. 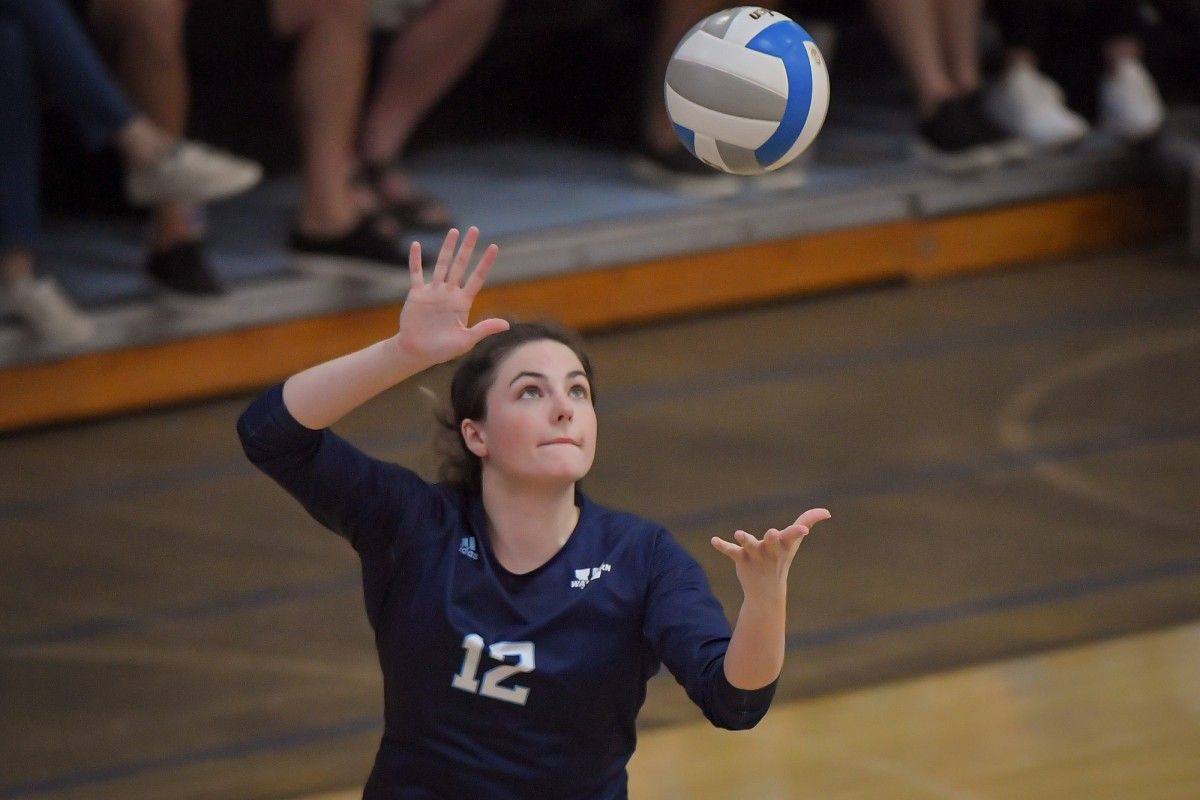 After getting through a tough spring semester, Washburn senior setter Allison Sadler says she is enjoying herself more than ever. [Photo by Rex Wolf/TSN]

By Sadler's own admission, that just didn't work, prompting the All-MIAA first-teamer to temporarily walk away from the sport she loves.

"I went in (to law school) probably the opposite time to go in,'' Sadler said. "Usually everyone starts in the fall, but the way I graduated I actually pushed it back so I could start law school in January after my senior year of playing.

"But COVID hit and it threw a wrench into a lot of plans for everybody, especially me.''

Sadler, a native of Parkville, Mo., began the spring trying to do both, but was quickly overwhelmed.

"That (spring) semester was probably the hardest time I've ever been through and I was trying to learn how to juggle not only law school but trying to be a leader on this team, too, and I wasn't doing that, so that's when everything kind of came to a halt,'' Sadler said. "I talked to coach (Chris Herron) and I apologized to everybody, but I didn't know my left from my right. I didn't know what I was doing here (in the gym), I didn't know what I was doing in school, I was failing at everything.

"At that point, that was my career I was messing with so I really needed to be smart about that. (Coach) was very understanding, but I was done. I wasn't going to be messing with my career long term.

But after a key injury to teammate Alaina Dunlavy and a conversation with Herron, Sadler and her coach worked out a way she could re-join the team.

"Unfortunately our setter (Dunlavy) that was left here got injured. She tore her rotator cuff and the team didn't have a setter at that point,'' Sadler said. "Coach texted me randomly one day after I knew what had happened and he was like, 'Do you miss it?' That was all he said and I said, 'Every single day.' ''

Herron and Sadler worked out a plan that allowed Sadler to practice a minimum of one day a week while participating in all of the Ichabods' matches during the spring before she returned to full-time duty this fall.

"Getting through the spring was the hardest time and this fall I actually dropped a class so I'm not taking the mandatory four that you take,'' Sadler explained. "I dropped one so I'm behind the rest of my class right now and I'll pick it up later, but I wanted to drop that to be here, to be with this incredible team that we have. This year is going to be insane, so I knew I wanted to be there full-time.''

Washburn is off to a perfect 5-0 record heading into Friday and Saturday's Mountain Lion Invitational at Colorado Springs and Sadler couldn't be happier.

"Taking those two weeks off showed me what life is like without the sport and it is something that I really don't want to experience,'' she said. "I know I'm going to at some point, but every single day of practice I'm so excited to be there, I'm so excited to compete.

"I know this time is soon going to be done and those two weeks showed me that more than anything. I think I needed that time to get a new perspective on the game. I have never enjoyed the sport as much as I do now.''