With a list of candidates that includes 11 Shawnee County football players that made it to the National Football League, three that played in the Super Bowl and numerous other college standouts as well as two of the most prolific high school stars in Kansas history, picking a No. 1 for TopSports.news' Best of the Best Top 25 was a arduous task.

In the end, the guy that helped put local football on the map back in the 1970s, former Shawnee Heights/Kansas star and longtime Cincinnati Bengal linebacker Tom Dinkel, gets the nod. 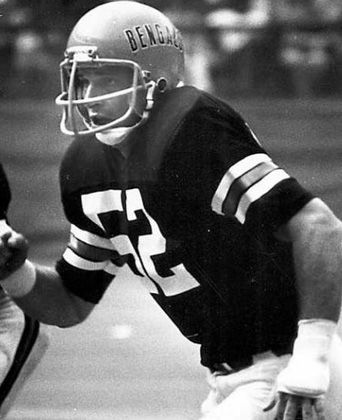 Dinkel, who helped the Bengals reach the Super Bowl after the 1981 season, played seven seasons in the NFL and also played in the USFL for the Jacksonville Bulls after being drafted in the fifth round by Cincinnate in the fifth round of the '78 draft. Topeka High product Ky Thomas and Rossville's Tucker Horak, who carved out history-making high school careers, went one-two in the Readers Choice Awards, combining for more than 500 reader votes. Horak is currently a senior running back at Pittsburg State while Thomas is a redshirt freshman back at Minnesota.

1. Tom Dinkel (Shawnee Heights) --  A member of the Topeka Shawnee County Sports Hall of Fame, Dinkel was a standout at Shawnee Heights and Kansas before being drafted in the fifth round of the 1978 NFL draft and playing seven seasons in the NFL as a linebacker for the Cincinnati Bengals, including the 1981 Super Bowl. Dinkel played 102 NFL games and served as a Bengals captain and also played for Jacksonville Bulls in the USFL.

2. Michael Wilhoite (Highland Park) -- A 2021 inductee into the Topeka Shawnee County Sports Hall of Fame, Wilhoite played quarterback at Highland Park before playing multiple positions on defense for Washburn University. Wilhoite's was signed by the San Francisco 49ers and went on to play six seasons in the NFL for the 49ers and Seahawks, incuding a Super Bowl appearance. Wilhoite played in 79 NFL games with 45 starts, registering 298 tackles. Currenty the linebackers coach for the Chargers.

3. Troy Wilson (Shawnee Heights) -- Wilson helped Pittsburg State win the 1991 NCAA Division II national championship. Drafted in the seventh round by San Francisco as a defensive end, Wilson was part of San Francisco's 1994 Super Bowl championship team and also played for the Saints, Bears and Broncos, playing 62 games with 73 tackles and 15.5 sacks. Wilson, a member of the Topeka Shawnee County Sports Hall of Fame, was also a member of the 2003 Tampa Bay Storm team that won the Arena Football League title.

4. Kyle McNorton (Seaman) -- The Seaman product was a standout linebacker for Kansas, leading the Jayhawks in tackles in 1980 and '81 and earning All-Big 8 and All-America recognition as a senior. McNorton, who was inducted into the Topeka Shawnee County Sports Hall of Fame earlier this year, played two seasons for the Kansas City Chiefs before knee injuries ended his career.

5. Trey Lewis (Washburn Rural) -- The Rural product was an All-American, MIAA Defensive Player of the Year and a three-time all-conference pick as a defensive lineman for Washburn University and went on to play in the NFL for the Atlanta Falcons. Lewis was drafted in the sixth round of the NFL Draft and became a starter as a rookie before suffering a pair of ACL injuries.

6. Teven Jenkins (Topeka High) -- The Topeka High product received All-Big 12 recognition three seasons as an offensive lineman for Oklahoma State, including first-team honors in 2020, and became the highest NFL draft choice in Shawnee County history earlier this year when he was picked by the Chicago Bears in the second round (No. 39 overall).

7. Corey Ballentine (Shawnee Heights) -- Earned the Cliff Harris Award as the top small college defensive player before being drafted in the sixth round of the 2019 NFL Draft by the New York Giants. A defensive back and returner, Ballentine is now with the New York Jets and starting his third season in the NFL. He has played 28 games with four starts, registering 46 tackles and 761 return yards.

8. Wyatt Hubert (Shawnee Heights) -- The former T-Bird star was a two-time first-team  All-Big 12 selection as a defensive end for Kansas State and was selected in the seventh round of the 2021 NFL Draft by the Cincinnati Bengals. Hubert played in 29 games for the Wildcats and ranks eighth on KSU's all-time list with 20 sacks.

9. Warren Seitz (Topeka West) -- Seitz was a three-sport standout at Topeka West before playing quarterback at Missouri and being drafted in the 10th round of the 1986 NFL Draft by the Pittsburgh Steelers. Seitz played with the Steelers in '86 and the New York Gians in '87 as a receiver. Seitz is a member of the Topeka Shawnee County Sports Hall of Fame.

10. Tucker Horak (Rossville) -- Horak became the first quarterback in Kansas prep history to pass for 2,000 yards and rush for 2,000 yards, leading the Bulldawgs to back-to-back 3A state titles. Horak is now a running back at Pittsburg State, rushing for 1,389 career yards (5.6 yards per carry) and earning All-MIAA honors.

11. Ky Thomas (Topeka High) -- Thomas finished his high school career for Topeka High with 7,703 rushing yards, ranking as the city's all-time leader and second in Kansas history. Thomas, who rushed for 3,009 yards and scored 39 touchdowns as a senior, is now at Division I Minnesota as a redshirt freshman.

12. Tony Leiker (Silver Lake) -- After starring for the Eagles, Leiker went on to earn All-America honors as a defensive end at Stanford and was drafted in the seventh round of the NFL Draft by the Green Bay Packers.

13. Lamar Mady (Topeka High) -- The former Trojan standout starred as an offensive lineman for Butler County Community College and Youngstown State and played in the NFL for the Raiders before playing for the Arizona Rattlers of the Indoor Football League. Mady earned All-IFL honors in multiple seasons and played on the Rattlers' 2018 championship team.

15. Dan Davis (Hayden) -- Davis was an All-Stater as a senior at Hayden, helping lead the Wildcats to a perfect season and the Class 4A state championship in 1998. Davis, who went on to play at Missouri, set a city rushing record (5,598 yards) that stood for more than two decades.

16. Nick Stringer (Hayden) -- Stringer was an All-Stater in 2004 after helping lead the Wildcats to an undefeated 4A state championship and he went on to earn All-Big 12 first-team honors for Kansas State as an offensive lineman. Stringer was a four-year starter for the Wildcats.

17. Dode Lesser (Seaman) -- Lesser was a Little All-American at Washburn University as an offensive tackle before going on to play professionally in the Continental and Canadian football leagues. Lesser is a member of the Topeka Shawnee County Sports Hall of Fame.

18. Will Cokeley (Washburn Rural) -- Cokeley was a junior college All-American at Coffeyville and a leading tackler at Kansas State before playing in the USFL for the Michigan Panthers and in the NFL in 1987 for the Buffalo Bills.

19. Duane Zlatnik (Rossville) -- A three-time state wrestling champion and an All-Stater in football for the Bulldawgs, Zlatnik went on to become a three-year starter in the offensive line for Kansas and earned All-Big 12 honorable mention recognition as a senior in 2012.

20. Justin Glasgow (Seaman) -- Glasgow was a three-year starter on the offensive line at Kansas after starring in three sports at Seaman, including state titles in wrestling and track and field. Glasgow received All-Big 12 honorable mention for the Jayhawks.

25. Rapheal Posey (Highland Park) -- Posey, who went on to play Division I basketball at Texas-San Antonio, set the career city passing record as a quarterback at Highland Park.

4. (tie) T.J. Michael  -- Was a standout offensive lineman at Topeka West and Seaman.

Next up: Women's golf Top 25 Best of the Best and Readers Choice Awards.